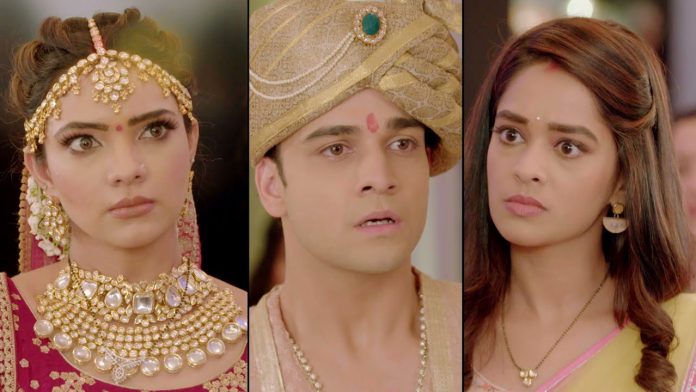 Kumkum Bhagya 3rd December 2021 Written Update Boldest Prachi Ranbir marries Rhea and gets her home. Pallavi welcomes them and performs Rhea’s grahpravesh. Prachi arrives home, when she misses to stop Ranbir’s marriage. She tells them that she will fight for her rights. She watches Rhea getting the blessings. She tells that Ranbir is already married, that’s with her/Prachi. She gets the water and pours on Rhea’s footprints. Rhea stops her and asks what is she doing. Prachi shouts that its not a valid marriage. She tears away Rhea’s garlands as well. Rhea raises hand on Prachi, who stops her and warns her to just stay as a sister and not dare to become her Sautan/the other woman in her husband’s life.

She gives a befitting reply to Rhea and shows her where she stands in Ranbir’s life. She loses her temper. She angrily slaps Rhea in front of Ranbir and Pallavi. She asks Rhea to know that she isn’t going to tolerate anything now. She gets her bags inside the house. She rebukes Rhea and calls the marriage a fraud. Rhea insults Prachi and asks Pallavi to throw her out. She accuses Prachi for snatching her husband Siddharth. She reminds Prachi how she was caught with Siddharth. She asks why did she come to claim Ranbir now.

Prachi tells that she isn’t wrong and she will not accept any nonsense. Rhea loses Ranbir even after marrying him, when Prachi calls it invalid. Rhea goes mad in anger. She asks Ranbir to defend her. Prachi tells that she didn’t divorce Ranbir, he is still her husband, Rhea won’t decide about their relation, because Rhea doesn’t know the meaning of a marital relation. She lectures Rhea. Pallavi and Ranbir are speechless, when they see Prachi’s daring side for the first time. Prachi is going against Rhea to save her own marriage.

She rebukes Ranbir for forgetting her in a month and moving on. She wants to tell him about her pregnancy. Prachi asks Rhea to leave from her house. Pallavi wants Prachi to leave. Prachi tells that she had fulfilled every responsibility well, she will not leave her rights and not tolerate anyone’s evil. She tells that Rhea is Ranbir’s second wife, whose identity doesn’t exist in their society. She fights Rhea and Kohlis, and goes to occupy her room back. Ranbir is shocked by Prachi’s move. Will Prachi win Ranbir back by this shockingly bold attempt? Comment your views. Keep reading.

Pallavi and Rhea don’t see Ranbir. Vikram stops Ranbir and tells that the marriage is important for Rhea. Ranbir tells that he can’t do this. Vikram tells that his mind is confusing him. He asks him to think of Rhea once, and not be selfish like always. He tells that Prachi wasn’t the right girl for him. He calls it enough that Ranbir always disobeyed him. He asks Ranbir to marry Rhea, else even his parents will die along with Rhea. He warns Ranbir. He asks Ranbir not to end their lives for Prachi. He convinces Ranbir and takes him to the mandap. Rhea sits in the mandap and asks for Ranbir.

Pandit tell that Vikram took Ranbir with him. Dida tells Pallavi that Ranbir doesn’t want to marry. Pallavi tells that Ranbir is back because he wants to marry. Dida feels sorry for him. Pallavi asks the pandit to start the marriage rituals. She tells Dida that Ranbir sat in the mandap and now the marriage will happen. She asks Dida not to brainwash Ranbir. Dida knows that Ranbir isn’t happy. She prays that the marriage stops. Ranbir and Rhea exchange the wedding garlands. Ranbir imagines Prachi and smiles happily.

The family thinks he is seeing Rhea and smiling. They wanted to see his smile. Ranbir’s smile vanishes when he sights Rhea back. Rhea wants to end Prachi’s thoughts from his mind. Pandit asks them to proceed with the gathbandhan rituals. The wind blows. Pandit asks them to shut the window quickly, the havan kund fire is important, its a bad omen if the fire is put off. Pandit asks Ranbir and Rhea to take the wedding rounds. Rhea asks Ranbir to get up for the rounds. He imagines Prachi again and smiles foolishly, proceeding with Rhea and taking the rounds. His smile makes Pallavi and Vikram smile.

Rhea is so happy and wishes that their happiness always stays the same. She wishes that Pallavi didn’t inform Siddharth. She knows that Prachi still loves Ranbir. She doesn’t want Siddharth and Prachi to come and stop the marriage. Pallavi wishes that the marriage doesn’t have any issue. Ranbir gets unhappy and crying seeing Rhea. He unwilling takes the rounds with her. He freezes at a point, and makes the gathbandhan break. Rhea looks at him. Prachi comes at the same instance and asks them to stop the marriage. She asks Ranbir how can he marry someone, when he promised to live with her all the life.

She asks him not to marry Rhea. Rhea asks Prachi to stop the drama. She wants Prachi to go away from their lives. Prachi silents Rhea. Dida gets happy to see Prachi back. Prachi asks Rhea to stop playing with their lives. She tells that she will expose Rhea’s games and expose her. She threatens to reveal Rhea’s truth to the family. She tells that Rhea can’t fool her like she fooled Siddharth. She can’t believe that Ranbir wanted to marry Rhea. Ranbir asks her what does she mean.

Prachi tells that they are separated today just because of Rhea, who made that hotel room plan and stained her character. She tells them that Rhea accused Pallavi and Vikram for the evil conspiracy. Rhea tells that Prachi is lying, because she can’t see them happy. Prachi asks her to stop acting. Siddharth comes there and adds that he can prove that Prachi is saying the truth. He tells them that he has the evidence against Rhea.

Siddharth tells that emotional people can’t be emotional fools. He adds that he recorded everything when Rhea confessed the crimes and told him that Pallavi was her crime partner. He tells that he has the video recording in his phone. Rhea is scared. Prachi tells that Rhea got scared because she is a liar. She asks Rhea to leave her dreams of marrying Ranbir. She exposes Rhea for plotting everything against her to separate Ranbir and her. She asks Rhea if she has no shame to stain her character, being her sister. Prachi cries and asks Ranbir how could he believe Rhea. She makes Ranbir realize his mistake.

She asks Ranbir how can he misunderstand her. She tells that she always loved Ranbir, she married him and he taught her to love, then left her forever. She rebukes him for not keeping his love or any vow by his loss of faith. She tells that Rhea wanted to marry him, and ruined their lives. Ranbir cries for Prachi. Siddharth tells that he needs a big screen to expose Rhea’s big truth. He wants to make arrangements. Prachi tells that no evidence will make her win Ranbir’s faith, her relation and her love will make her win Ranbir’s lost trust.

Reviewed Rating for Kumkum Bhagya 3rd December 2021 Written Update Boldest Prachi: 5/5 This rating is solely based on the opinion of the writer. You may post your own take on the show in the comment section below.