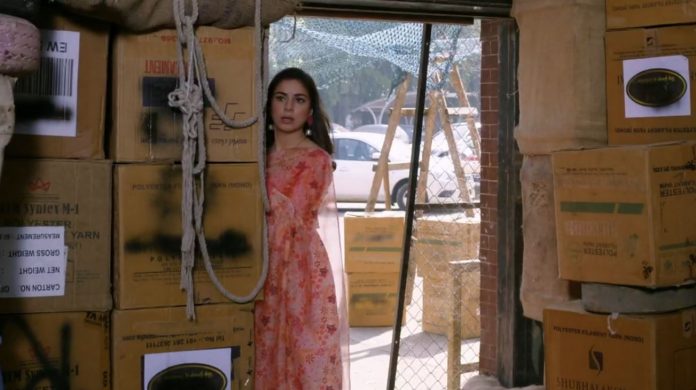 She tells that she doesn’t know if Sonakshi will get saved. Karan is much worried for Pihu. Preeta hides in his car and doesn’t let Karan know it. She wants to go to Pihu and save her. She thinks Pihu will be happy to see her. Sonakshi follows Karan’s car. She calls Karan on the phone she planted in his car. Karan asks her how did she reach his car. She tells that she can reach anywhere. She asks him not to double cross her. She asks him to throw his phone out of the car. Karan tells that he will switch off the phone instead throwing it.

She demands him to throw the phone. He throws his phone. He realizes that she is looking at him from far. She asks him to stop his car. He asks her how does she know everything. She asks him to put the money in the empty bag and leave the tracker bag there itself. She tells that she knows about his friend Vinod putting the tracker bug in the bag. Karan follows her instructions. He dumps the money bag in the dustbin. She tells that she is keeping a watch on him. She asks him to leave from there. Sonakshi tells Vicky that she got him along because he doesn’t know about Pihu.

Sonakshi tells Vicky that she can’t go to Karan and talk to him face to face, else he will recognize her voice. She sends Vicky to speak to Karan. She waits in the car. Vicky goes to Karan. She hears his conversation with Karan. Vicky takes Karan at gun point. He asks Karan to remove the bugs. He gets the money from Karan and tells that he will tell about Pihu later. Preeta secretly plans to follow the goons to their hideout by hiding in the goons’ car itself. Sonakshi doesn’t see Preeta getting inside the car dickey.

Karan wants to know about Pihu. The police comes there. Sonakshi leaves Vicky there and escapes. Sonakshi is shocked to hear the gunshot. Vicky gets Karan at gun point and shoots at him. The police shoots down Vicky, much to Karan’s shock. Karan asks Vicky to tell him about Pihu. Vicky dies. Preeta is in Sonakshi’s car. Inspector tells that Vicky is dead. Karan asks Inspector why did he come uncalled. He tells that he could have reached Pihu. He asks who has asked the police to help. Inspector tells that Vinod called him. Karan rages at the police. He rushes home to confront Vinod.

Inspector informs Vinod that Karan didn’t get Pihu. He apologizes that everything went wrong. He narrates the entire incident. Shrishti overhears Vinod’s conversation. She asks Vinod why did he go against Karan’s orders. Vinod tells that he can’t follow the kidnappers’ instructions. The media reaches the Luthra mansion and reveals the news of Pihu’s kidnapping. They ask Vinod to update them about the case. Vinod tells that they are finding Pihu. Preeta wants to know who is dressed in the burqa.

She can’t see Sonakshi’s face. Sonakshi reaches the hideout. Preeta follows her there and goes inside to find Pihu. Karan reaches home in rage. He avoids the media. He vents anger on Vinod. He slaps Vinod and calls his move a big mistake. He tells that he was trying to get Pihu back, Vinod didn’t need to involve the police. Mahesh calms down Karan. Karan yells at Vinod and blames him for putting Pihu in danger. Luthras cry for Pihu. They aren’t aware of Preeta’s secret task to rescue Pihu. Will Preeta be able to save Pihu and also expose Sonakshi? Keep reading.

Reviewed Rating for Kundali Bhagya 2nd December 2021 Written Update Preeta’s Secret: 3/5 This rating is solely based on the opinion of the writer. You may post your own take on the show in the comment section below.