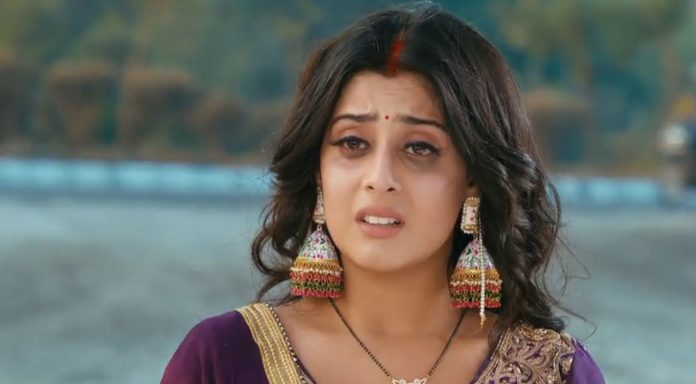 Udaariyaan 3rd December 2021 Written Update Jasmin’s payback Angad feels Tejo’s sorrow. He finds her really upset and asks her to rethink on her decision, if she really wants to leave the village, her family and Fateh. On the other hand, Jasmin returns to Sandhu house with her broken dreams. She meets Rupy and apologizes to him. She feels totally shattered after Fateh’s deceive. Rupy learns what Fateh has done with Jasmin. He feels his curse has struck her and really ruined her happiness. Fateh is also broken down. He walks on the road in a lost state of mind. He falls down and cries.

Jasmin doesn’t want Fateh to know about Tejo and Angad’s fake engagement. She hides Tejo’s sacrifice so that Fateh never unites back with Tejo. Fateh regrets that he had never seen Jasmin’s truth and always forgiven her which has encouraged her to do more wrong with Tejo. He decides to never forgive her. He feels he has lost his life because of Jasmin, who played with his emotions and heart. He doesn’t think the punishment he gave to Jasmin is enough for her, because she has ruined his entire life and family. He wants to stay away from Tejo and punish himself as well. He doesn’t think he will meet Tejo again. He visualizes Tejo and thinks if she is really there.

Later, Fateh meets Rupy and apologizes to him for his fake marriage drama. He tells Rupy that he is also at fault along with Jasmin. He tells that he had to fake the marriage with Jasmin just for Tejo’s sake, he wants to see her move on in her life. He adds that he wants Tejo’s happiness, that’s with Angad. He requests Rupy to not tell anything to Tejo. Rupy recollects Tejo’s words, that she had faked the engagement just for the sake of Fateh’s happiness. He realizes that Fateh and Tejo are meant to be together.

Elsewhere, Jasmin gathers her broken self and stands up once again, but for revenge. She tells that Fateh has just seen her love and now he shall see her hatred. She promises to destroy Fateh and Tejo’s lives. Jasmin will take the police to Virk house and demand them to accept her as their Bahu. She plans to forcibly enter their house by using the law. How will Jasmin’s hatred tumble down Fateh’s life? What havoc will Jasmin bring in Virk family? Keep reading.

Jasmin tries to get her costly luggage back from the aircraft. She doesn’t get anything recovered because she already missed the flight, and also her passport and boarding pass. The airport authorities refuse to help her and make her leave the airport. Fateh is much depressed and misses Tejo. He thinks he should have stayed happy in his marriage with Tejo, if he didn’t get blind in Jasmin’s love. He regrets while recalling Tejo’s words. He wishes he could find a way that he can forget Tejo and also their memories. He stumbles down and imagines Tejo coming to care for him. He wishes that Tejo stays happy wherever she goes. He also plans to go afar from her life to never come back.

Fateh doesn’t know that she left the village already. Angad brings Tejo to his hometown. He shows his home to her, and knows that she won’t be comfortable to share the roof with him. He lets her occupy his outhouse where she can stay alone and have privacy. He tells her that his outhouse will be lucky if she stays there. He asks her to spend time and try to eradicate sorrow. She doesn’t know what work she will be taking up for her living. Angad tells that he has thought of everything for her, he will line up things once she settles down. He asks Tejo to stay happy.

Tejo asks him why didn’t he remove the engagement ring. Angad wants to keep wearing it. He has good memories of their engagement. He tells her that he will remove it later. He makes her smile by his charming talks and goes. Jasmin is left with no other way than to return to Sandhu house. Rupy tells the family about Tejo’s sacrifice. They cry knowing Tejo didn’t get engaged to Angad. They feel sorry for Tejo who is still lonely. Rupy tells that Tejo and Angad have friendship, Angad will take care of her. He trusts both of them. The family cries for Tejo. Rupy is angered and tries to burn Jasmin’s belongings to end the memories.

He wishes Jasmin wasn’t his daughter. The family worries seeing his move. He burns all the things that gave Canada dreams to Jasmin, since it has ruined their happiness completely. He thinks Jasmin has reached Canada by now. He vents out his anger. He speaks to Tejo when he calls him. She informs that she is happy and fine, because of Angad. He wishes that she stays happy, and far from Jasmin’s shadow. He blesses Tejo. He gets an unexpected visitor at night. He is shocked to see Jasmin at the door in a sobbing state. He asks her about Fateh. She begs him to keep her home, because she has no place to go now.

She tells him that she can’t go to Virk house, they will never accept her, after all Fateh has left her alone. She tells that she doesn’t know about Fateh. Fateh sits outside the Gurudwara and weeps. Tejo and Fateh miss each other. Jasmin tells Rupy how Fateh cheated her and burnt her passport. She also reveals about the fake marriage planned by Fateh. Rupy laughs on her miseries and rebukes Jasmin. He tells that finally justice has happened and she got punished for her sins. He makes her leave the house to never see her again.

Angad’s daughter comes home without taking the permission for their meeting. Angad grows worried and angrily shouts on her for putting him into a big fix. Tejo gets to see Angad with his daughter, but fails to understand why he is behaving so rude with a little girl. Angad tells Riya that she has put him into a trouble, she doesn’t know that her secret trip to their house will make him face legal issues. He scolds his servants for their negligence that Riya got hid in the car and came home without informing anyone at the hostel. Riya tells that she wants to live with her dad and not go back to the hostel.

Angad doesn’t listen to her. He tells that he will drop her back to the hostel tomorrow. He informs the hostel warden that Riya came home because of some misunderstanding by his staff. He promises to drop her back soon. He doesn’t want to upset anyone by bringing Riya home. Tejo watches his upsetting behavior and calls it enough. She asks him not to behave badly with his own daughter. Angad asks her to mind her own work and not interfere in his family matters from now. He tells that he can handle Riya. He asks Tejo to go back to the outhouse. Tejo wonders if Angad is hiding some big trouble that he is behaving totally odd. Keep reading.

Reviewed Rating for Udaariyaan 3rd December 2021 Written Update Jasmin’s payback: 5/5 This rating is solely based on the opinion of the writer. You may post your own take on the show in the comment section below.