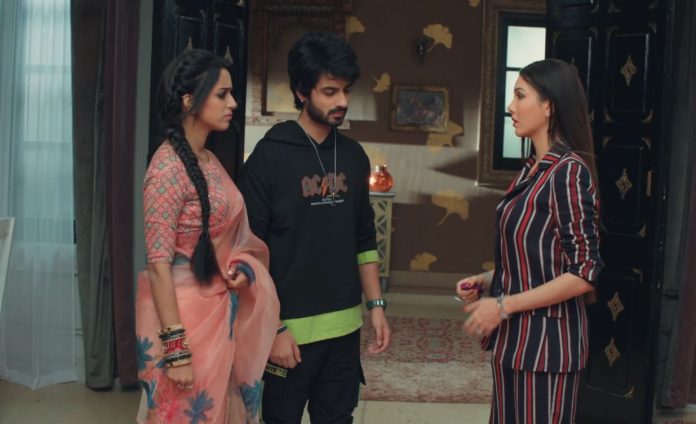 Yeh Hai Chahatein 2nd December 2021 Written Update Intense twist Rudra arrives in Mishka’s room. She asks him if her medical reports arrived. Rudra replies yes. Mishka asks Rudra to catch Venky and tell everyone that Venky raped her. Rudra lowers his head. Mishka asks him what happened? Rudra says the report came negative. He tells Mishka that according to reports, she didn’t get raped. Mishka gets shocked and tells Rudra that this can’t be true. She also tells Rudra that Venky told her that he will make all the accusations that she put on him 10 years ago true.

Mishka explains to Rudra that Venky tore her sleeves and threw her on bed. She says reports are not right. Rudra asks Mishka to try remembering everything once again. She explains to Rudra that Venky came to her room, tore her sleeves and kept his hands on her mouth. Mishka stops and says that after all this she doesn’t remember anything. She says after this she only remembers that Prisha woke her up. Rudra understands everything and tells Mishka that Venky never raped her or had the intentions to rape her. He explains to Mishka that Venky only wanted to embarrass and insult her in front of everyone like what she did to him.

Rudra further explains to Mishka that Venky knew that reports will come negative and she will get proved wrong in front of everyone. He tells Mishka that Venky is just taking 10 years old revenge from her. Rudra also tells Mishka that Venky knew that everyone would believe him, misinterpreting his mental condition. Mishka asks Rudra how they will expose a clever person like Venky. Next, Rudra will be seen telling everyone that reports came positive. He tells everyone that according to reports Mishka actually got raped. This shocks everyone. Vasudha asks Rudra what is Venky’s relation with Mishka’s rape? She says maybe someone else raped Mishka.

Rudra says to Vasudha that only Venky had the motive to get revenge from Mishka. He tells everyone that Mishka was in consciousness when she got raped. Rudra says Mishka saw Venky forcing her. He asks Vasudha to think why will Mishka put false allegations on Venky on her own wedding day. Rudra continuously asks Vasudha to think why will Mishka ruin her own life when she was happy with her marriage with Param. Vasudha keeps on defending Venky and blaming Mishka for everything. She asks Prisha to decide whom she trusts, her husband or brother.

Prisha tells Vasudha that she wants to help Rudra find out who raped Mishka. She also says that she is 100% sure that Venky didn’t do anything wrong. Prisha says she wants to know why Mishka put such bad allegations on her brother. Mishka asks Prisha to believe that Venky did wrong with her. Prisha shouts and refuses to believe that Venky did wrong with Mishka. She also tells Mishka that she will help her find her rapist being a woman herself, but again says that her brother didn’t do anything wrong with her. Prisha also tells Vasudha that she will come to her home. She says that she can’t trust or live with a person who put such bad allegations on her brother. Prisha says she will live in Khurana Mansion to expose the real culprit and prove Venky’s innocence.

Vasudha takes Venky away. Venky smirks seeing Rudra and through his gestures tells him that Prisha still trusts him. Rudra looks at him angrily. Next Rudra is seen talking to Mishka in a room. He tells Mishka that their plan failed as Venky didn’t get affected and blurted out the truth according to their plan. Rudra asks Mishka to try remembering if she wounded Venky in her struggle to save herself from him.

Mishka recalls and tells Rudra that she pushed Venky and even scratched his shoulders with her nails. She also tells Rudra that Venky’s kurta pocket tore and came in her hand. Rudra and Mishka recall that Venky changed his outfit after forcing himself on Mishka. Rudra takes Mishka and Prisha to Srinivasan’s house. Vasudha asks Rudra why he came here, if he wants to create any new drama? She tells Rudra that Venky has nothing to do with Mishka. She continuously asks Rudra why he came. Rudra says he wants everyone to see something. He aska Venky to take out his kurta. Venky does as said. Everyone gets shocked seeing scratch marks on Venky’s shoulders. Rudra tells Venky got these scratches when Mishka tried to save herself from him. Venky tries to defend himself and says he might have gotten wounded while working on something.

Vasudha asks Rudra why he believes who has always lied. Prisha asks Vasudha to understand that something wrong happened with Mishka and they need to bring her justice. Rudra in his thoughts regrets lying to Prisha. Vasudha asks Prisha to not forget that she got her son after 10 years. She says she will not let any harm come to Venky. Prisha asks Vasudha to let Venky give his DNA samplesm as after this Venky will be proved innocent and will never get involved in Mishka’s rape matter. She asks Vasudha to understand that Mishka too has the right to get justice.

Prisha shows Venky the torn pocket of his Kurta and asks him if he didn’t wear it because it’s pocket tore. She asks Venky how his kurta’s torn pocket came into Mishka’s room when he didn’t go to Mishka’s room? Vasudha again defends Venky and says that it is Mishka’s trick to make Prisha against her brother. Mishka tries to defend herself. Prisha asks Vasudha to always stop defending Venky again and again. She requests Vasudha to understand that Mishka lost her respect and evidence given by Rudra cannot be ignored. Vasudha asks Prisha if she wants to support Mishka and Rudra and accuse her own brother. Prisha tells Vasudha she herself wants the DNA test reports to come negative, so that Venky can be proved innocent.

Vasudha says they will talk after reports come. She asks everyone to get out and not trouble her son. Everyone leaves Venky’s room. Venky thinks Rudra played a good game and trapped him in rape case even when he didn’t raped Mishka. In the next episode, Mishka will ask Rudra what will happen when Prisha will get to know that they lied to her about her rape and skin samples. Venky will show Mishka’s real medical reports to everyone, which proves that she didn’t got raped. Prisha will ask Rudra if he lied to her. Rudra will accept that he lied to Prisha. Prisha will end all her relations with Rudra.

Reviewed Rating for Yeh Hai Chahatein 2nd December 2021 Written Update Intense twist: 3/5 This rating is solely based on the opinion of the writer. You may post your own take on the show in the comment section below.