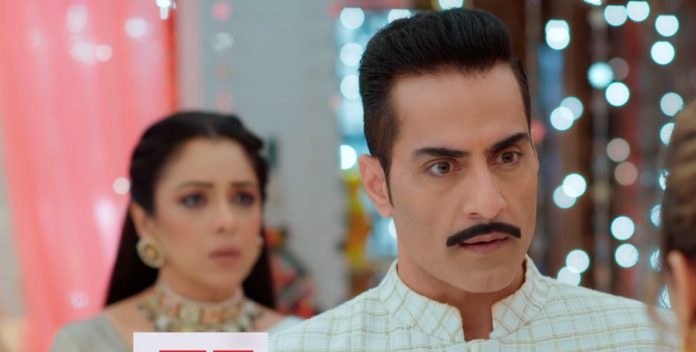 Anupama 3rd December 2021 Written Update Vanraj’s divorce Anupama comes to Shah house. Before reaching, she thinks about how her children would be preparing for Baa and Bapuji’s wedding anniversary alone. She prays to God to not let rain or anything interrupt Baa-Bapuji’s remarriage and ruin the family’s happiness. Kavya gets angry thinking Anupama is doing Tulsi pooja outside Shah house. She thinks about clearing everything with Anupama. Anupama and Dolly help Baa get ready for her remarriage. Baa says that life is a circle, sometimes mothers help their daughters get ready and sometimes daughters help their mother get ready for their special days.

Anupama applies a kaala teeka to Baa and tells her that she is the most beautiful bride in the world. Baa asks Anupama to not lie for her happiness. Anupama says she is telling the truth. Baa tells Anupama that it is her honesty that has brought the family together once again. Anupama and Dolly hug Baa. Bapuji tells Vanraj that he similarly helped him get ready 26 years ago. Vanraj says to Bapuji that he is lucky to help him get ready for his 50th wedding anniversary. He tells he is lucky that his parents live with him and he has their blessings too. Vanraj tells Bapuji that he is not lucky like him in marriage matters.

Bapuji tells Vanraj that it is a talent to be happy together with your partner for so many years even after many fights and arguments. He also tells Vanraj that he will learn it soon. Vanraj agrees with Bapuji. He receives a message from someone informing that the package has been delivered to his house. Baa gets emotional. Anupama asks Baa not to cry on this happy day and ruin her makeup. Girls bring Baa like a bride, they sing and dance on “Jaldi aaja Dhuke Raaja”. Boys bring Bapuji, they sing and Bapuji dance on “Tere ghar aaya tujhko lene”. Everyone gets happy and surprised. Anupama applies Teeka to Bapuji. Baa gets shy.

Baa too starts dancing with Bapuji and other family members. Anupama applies teeka to Baa and performs their aarti. Vanraj takes Aarti thaal and performs his parents aarti. Kavya gets angry recalling Anupama and Vanraj performing aarti as a couple together in the past family functions. Paritosh and Kinjal get awkward dancing together. Samar and Nandini dance together happily. GK sees Anuj seeing Anupama and Vanraj dancing near each other. He asks Anuj if he is feeling jealous? Anuj replies he is not jealous, just happy that Anupama and Vanraj are standing with each other for the family’s happiness.

GK tells Anuj that Anupama doesn’t need Vanraj’s support and is standing with him only for the family’s happiness. Anuj tells GK that Anupama doesn’t need anybody’s support. He asks GK why he is asking such questions. GK tells Anuj that he does want him to feel bad seeing Vanraj and Anupama standing together for the family’s happiness. Anuj tells GK that he understands that Anupama and Vanraj do everything for their family. GK praises Anuj for being wiser than him. GK jokingly asks Bapuji to not lower his head in front of Baa for varmala. Bapuji lowers his head saying that God also can lower head in front of Baa. Baa and Bapuji make each other wear varmala. Bapuji applies vermilion in Baa’s hairline. He also makes her wear the mangalsutra.

Kavya feels angry seeing shahs and Anupama happy together. Anupama announces that Baa and Bapuji got married. In a pandit ji style, Vanraj tells them that they became husband and wife now. GK jokingly congratulates Bapuji on life imprisonment. Everyone else also congratulates and wishes Baa and Bapuji. Anuj suggests a couple games for Baa and Bapuji. He gives them a thread and asks them to tie it with only one of their hands. Anuj explains that this game will reveal the accord between the couple. Baa and Bapuji successfully complete the game.

Shahs and Anupama gather for a family/group picture. Kavya gets angry seeing Vanraj’s hand on Anupama’s shoulder. She recalls her old moments with Vanraj. Kavya grabs Anupama out of the family picture. Vanraj gets angry and asks Kavya what insolence is this. Kavya reminds everyone that Anupama was insolent with her when slapped her during Paritosh’s marriage. She makes it clear to Anupama that earlier she (Kavya) was an outsider but at present Anupama is an outsider while she (Kavya) is Vanraj’s wife.

Kavya tells Anupama she can also slap her like she slapped her earlier. Kinjal tells Kavya that she created drama during her marriage and is again creating drama at present. Kavya says she just wants to talk. Vanraj telms Kavya they will talk later. Kavya says she will talk now only. Anupama asks Kavya if she didn’t want to create any drama then she should have taken her aside to talk. She asks Kavya to talk to her in some room. Anupama warns Kavya to ruin Baa and Bapuji’s anniversary and her family’s happiness. Kavya says she will not stay silent now. Anupama stops Vanraj to interrupt her and Kavya.

Kavya forcefully takes Anupama aside. Samar says Kavya had to do this now. Nandini says she is embarrassed that Kavya is her aunt. Kinjal says she doesn’t understand why Kavya can’t see their family happy. Pakhi tells Vanraj that he should have stopped Kavya. Vanraj feels angrier. Even Anuj condemns Kavya’s behavior. Kavya takes Anupama to her and Vanraj’s room. She taunts Anupama for recalling the past moments. Kavya continuously taunts Anupama for coming to Shah house again and again. Anupama says that she only came for Baa and Bapuji’s anniversary. Kavya tells Anupama that she and Anuj are always seen in Shah house. She asks Anupama when do she and Anuj work on their big business?

Anupama says to Kavya that they work instead of pretending to work. Kavya calls Anupama illiterate. She says when illiterate people get a big business partnership, they talk like this only. Anupama gives Kavya a befitting reply and taunts her saying that people like her (Anupama) have to work when educated people like Kavya have left, even trying to get a job. Kavya tells Anupama that she has learnt to give befitting replies. Anupama asks Kavya what she wants from her. Kavya asks Anupama why she planned and organised everything for Baa and Bapuji’s anniversary instead of coming as a guest.

Anupama asks Kavya if she feels secure now? She tells Kavya that she is scared/insecure because she snacted the family and house from her. Anupama asks Kavya if she is scared because like family, Vanraj is going away from her too? Everyone wonders what is taking long between Anupama and Kavya. Angry Kavya abuses Anupama. Anupama searches for the word Kavya said to her. She checks the word meant foolish. Anupama tells Kavya that she could have called her foolish in hindi too. She tells Kavya that if she talks in advance in English, their conversation will surely get interrupted.

In the next episode, Kavya will be shocked to receive divorce papers from Vanraj. This shocks Anupama too. Vanraj will smirk and tell Kavya that it’s time they should get divorced. This will shock other people present in the anniversary celebrations too.

Reviewed Rating for Anupama 3rd December 2021 Written Update Vanraj’s divorce: 5/5 This rating is solely based on the opinion of the writer. You may post your own take on the show in the comment section below.