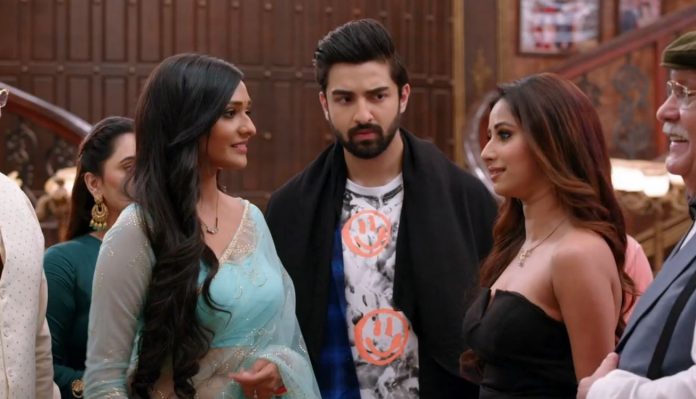 Bhagya Lakshmi 4th December 2021 Written Update Roka twist Malishka cries for Rishi and gathers the pieces of his torn picture. Kiran finds her crying a lot. Lakshmi asks Rishi did he get the love band back from Malishka when they had a fight. She tells that its wrong, they fight like kids all the time. She adds that she will return it to Malishka. He tells that its not needed. She tells that Malishka isn’t wrong, he has changed a lot after his marriage, and now Malishka is getting married, they shall do good things and surprise her. She asks him not to stop her.

Kiran asks Malishka to return the memories to Rishi, who has a loving wife with him now. She tells that Rishi is confused between the two women in his life, Lakshmi loves him and he loves Malishka, he has no fear of losing Malishka, he has to understand that he will lose her if he doesn’t end ties with Lakshmi. She asks her to move forward, if Rishi loves her, then he will understand that he can’t live without her. She suggests her to go ahead with Viraj. Malishka takes her advice. Virender is happy. Dadi pulls his ear. She asks him to share the good news with him.

Ayush laughs seeing Virender in trouble. He asks Dadi to pull his ear more. Dadi pulls Ayush’s ear as well. She asks them why don’t they tell her about the good news. He tells that he will tell her everything. Neelam comes there and asks them to come for breakfast. Virender tells that they will talk later. Karishma and Neelam ask them what’s happening. Dadi tells that she doesn’t know anything herself.

Neelam tells that she has to talk to Karishma. Lakshmi greets them. She feels lucky to get blessings from the elders. Virender tells that he will always bless her. Dadi shows his annoyance towards him. He asks him why was he so happy. Virender tells that Malishka and Viraj are getting married. Ahana and Devika get happy, while Sonia is upset. Virender and Ayush happily say that Malishka is gone now. Malishka arrives home and shocks them. Lakshmi welcomes her and hugs. She asks why is she so worried. Malishka blames her for all her troubles. Neelam tells Karishma that something is fishy, Sonia, Ahana and Devika have some fights going on between them. She asks her to find out the problem and solve it.

She doesn’t want the children to fight for anything. Karishma assures that she will handle it. Lakshmi asks what did she do. Malishka tells that Lakshmi met Viraj’s Dadu, who wants her to learn everything from Lakshmi. Viraj, Kiran and Dadu meet Rishi’s family. Dadu is happy to meet them. Rishi is upset to hear about the Roka from Malishka. Dadu also praises Lakshmi, who convinced Viraj for the marriage. Malishka announces the news, that Viraj and she are getting married. Neelam and Karishma are shocked to know this news. Malishka asks didn’t Rishi tell anyone that Viraj and her relation is fixed now.

She adds that she has agreed because of Rishi. She welcomes the family in her Roka. Dadu tells that they will surely come. Virender and Dadi tell that they are very happy for Malishka. They congratulate Malishka and Viraj. Neelam takes Malishka along for a talk. Dadu tells Virender that he is lucky to find Lakshmi for his son Rishi. Karishma stops Kiran to not forget their motive behind Rishi and Malishka’s marriage plans. Kiran tells that things have changed because of Lakshmi. Lakshmi gets the sweets for everyone. Ahana, Ayush and Devika tease Rishi and Lakshmi for their romance.

Viraj also feels that Rishi and Lakshmi love each other a lot. Virender wishes that Viraj stays happy after his marriage with Malishka. He hopes she isn’t doing this to provoke Rishi. Malishka tells Neelam that she can’t wait for Rishi, she isn’t taking revenge on Rishi, he loves Lakshmi now. Karishma tells that Rishi is a good man and behaves well with Lakshmi, he doesn’t love her. Kiran disagrees. She tells that Rishi will not leave Lakshmi. Malishka tells Neelam that she loves Rishi, but she can’t wait for one year, Rishi has to break his relation with Lakshmi if he wants her back. Keep reading.

Reviewed Rating for Bhagya Lakshmi 4th December 2021 Written Update Roka twist: 3/5 This rating is solely based on the opinion of the writer. You may post your own take on the show in the comment section below.