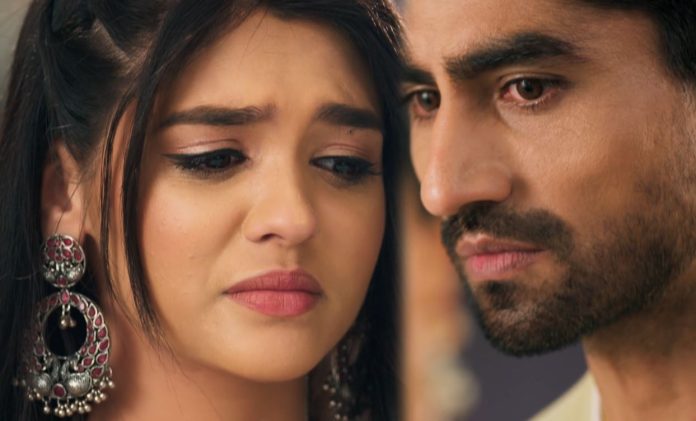 On the other hand, Parth sees Shefali setting up Camera and mic for some media reporting. He calls Shefali selfish for creating a drama of her own family’s inside talka to get praise from her office. Shefali tells Parth that she just wants to help Abhimanyu to show his side to the world. Parth says they have lawyers for it and she doesn’t need to do anything. Shefali says to Parth that he can’t tell her how and when to do her work. Parth says he can’t let her work affect his brother and his hospital’s reputation. Shefali asks Parth, since then, he started worrying about the hospital’s reputation as he never went to hospital to work. She taunts Parth for not working even after having a doctor’s degree.

Shefali tells Parth that she did journalism to bring the right thing in front of the world. She asks Parth to let her do her work. Parth taunts Shefali by saying that she runs from her responsibilities in the name of work. Both Shefali and Parth continue arguing with and taunting each other. Shefali asks Parth to accept that he is jealous of her success like a typical man. Parth tells Shefali that he can’t bear face anymore. He ruins her camera setup and asks her to get out of the house. Family tries to calm Parth. Shefali asks Parth who is he to oust her from the house. She says that she also doesn’t want to live with a person who can’t respect his wife’s work and blames his wife for his failure.

Parth and Shefali ask each other to shut up. Abhimayu stops Shefali from leaving. He asks them to not get angry and advises them to not take any decision in anger. Abhimanyu apologizes to Parth and Shefali for being the reason for their arguments and fights. On the other hand, Akshara thanks Manish for agreeing to help Abhimanyu. She reminds Manish that he himself taught him that a lie which is spoken for someone’s good is not considered a lie. She again excitedly thanked him for agreeing to help Abhimanyu. Manish looks at Akshara with anger. Kairav says that Manish’s idea of talking to the medical association is good.

Akshara asks if they can go and talk to the medical association. Aarohi says to Manish that they should save the career of a talented doctor like Abhimanyu. Manish agrees to it and says he will talk to Akshara later on. He leaves saying that they will meet and leave for medical association in 10 minutes. Harshvardhan on the other hand, tells everyone that he told everything that happened to their lawyers. He asks Abhimanyu to try recalling if there is any proof or witness. Harshvardhan also says that if case goes against Abhimanyu, his medical license could get cancelled and he will not be able to practice/work for next ten years.

Harshvardhan requests Abhimanyu to please recall something. Aware of the truth, Manjari and Neil feel nervous. Anand wonders why CCTV cameras have to not work during incident day only. He says that CCTV footage would even not have worked as people saw Ruby crying while coming out of Abhimanyu’s cabin. Anand further says that even some junior doctor saw Abhimanyu angry and his cabin ruined after incident time. He asks who will prove Abhimanyu’s innocence now. Abhimanyu thinks he will not let Akshara’s name come in between even if anything happens.

Harshvardhan continuously requests Abhimanyu to think of someone who could be his witness. Scared and worried, Manjari blurts that Akshara was present in Abhimanyu’s cabin during the incident. This shocks the whole Birla family. Abhimanyu tries to stop Manjari from telling anything. Manjari tells Abhimanyu that a mother can’t stop seeing her child in trouble or danger. She says can’t be silent seeing him in trouble. Harshvardhan gets angry knowing that Abhimanyu was hiding that Akshara was present at the time and place of incident. He says now Akshara will tell the whole truth. Abhimanyu tells Harshvardhan that he will not bring Akshara in between.

Harshvardhan asks Abhimanyu if he has gone mad. He says Akshara will have to become his case’s witness. Abhimanyu and Harsht argue if Akshara will give a statement in Abhimanyu’s favour or not. Abhimanyu gets angry and shouts that no one will ask Akshara to become his witness. He says Akshara will not get involved in his case. On the other hand, Akilesh refuses to take Aarohi with them to the medical association. They stop leaving on seeing Birlas on their door. Harshvardhan recalls that he calmed Abhimanyu by lying to him that they will not involve Akshara and let their lawyers handle his case. He too recalls Abhimanyu’s words that Akshara won’t get involved. Harshvardhan further recalls that he told his family that he lied to Abhimanyu and will definitely make Akshara give a statement in Abhimanyu’s favour.

Flashback ends. Akshara gets scared that both families may get into a war of words again. On the other side, Neil and Manjari get tensed thinking what will happen when Abhimanyu will get to know the truth. Abhimanyu gets irritated by repeated questions from lawyers. Back at Goenka mansion, Harshvardhan blames Akshara for accusations on Abhimanyu. Goenka gets shocked with Harshvardhan’s behaviour and allegations towards Akshara. Harshvardhan asks what Akshara was waiting for when she knew that she could save Abhimanyu. He says that Akshara might have wanted them to beg in front of her for Abhimanyu.

Swarna asks Harshvardhan in what way is he talking? Anand tries calming Harshvardhan but the latter continually blames Akshara for everything. He says this wouldn’t have happened if Akshara wouldn’t have planned the birthday party for Abhimanyu. Manish asks Harshvardhan how could he blame a person who tried to bring a smile on his son’s face and wants to save him from legal matters. Harshvardhan says Goenkas will praise their daughter only. He further says they just came to take their daughter with them. Akhilesh asks what does he mean? Harshvardhan says Akshara will have to give a statement in Abhimanyu’s favour in court.

Aarohi forcefully takes Akshara inside and blames her for all problems. Akshara continues worrying for Abhimanyu. Manish tells Birlas that they have become helpless but still showing dominance. Manish says Akshara will not help them. Anand asks how they can do this to them. Manish tells Birlas that they are heartless even being cardiologists. Mahima says they are asking Akshara’s help because their hospital’s reputation and Abhimanyu’s career is at stake. Manish says they should politely ask or request for help. Goenkas and Birlas again start arguing. Kairav asks Harshvardhan if he even once thought of Akshara’s respect and tells that he is only thinking about his son.

He further says even knowing about the consequences, they were taking Akshara’s to give a statement in favour of Abhimanyu. Kairav says now they will not let Akshara help Abhimanyu. Harshvardhan asks Kairav does he even know who he is? Manish tells Birlas that money can’t define a person’s character. Kairav asks you, seeing someone. In the room Aarohi blames Akshara for everything. Akshara prays to help her in saving Abhimanyu from false allegations. Goenkas and Birlas get shocked seeing Abhimanyu at Goenka Mansion’s entrance.

Abhimanyu recalls that he saw Harshvardhan’s message on lawyer’s phone. He read that Harshvardhan messaged the lawyer to be ready as they will anyhow bring Akshara to give a statement in favour of Abhimanyu. Akshara senses Abhimanyu’s arrival. Kairav asks Abhimanyu why he came here? Abhimanyu says no one will say anything now. Birlas recall that Abhimanyu asked them to not involve Akshara in his case. Akshara tries to go and see if Abhimanyu has come downstairs but Aarohi stops her. Abhimayu stares angrily at Harshvardhan and says now only he will speak and for the last time.

Abhimanyu apologizes to Goenkas for whatever happened. He also promises them that Akshara’s name won’t get involved in his case. Abhimanyu asks his family to return home. Akshara feels emotional and takes Abhimanyu’s name in her mind. Abhimayu hears it and stops at Goenka’s entrance. In the next episode, Harshvardhan will tell Abhimanyu that he will drag Akshara to court. Abhimanyu will tell Harshvardhan that he will lie to the court that he molested Ruby if he drags Akshara to the court. Birals will be shocked by Abhimanyu’s words. Akshara will secretly run out of the house to give a statement in Abhimanyu’s favour. She will say that if Abhimanyu can get defamed in her love then she is ready to get ruined in his love. Kairav will refuse to let Akshara go to the court.

Reviewed Rating for Yeh Rishta 3rd December 2021 Written Update Abhi’s stand: 3/5 This rating is solely based on the opinion of the writer. You may post your own take on the show in the comment section below.