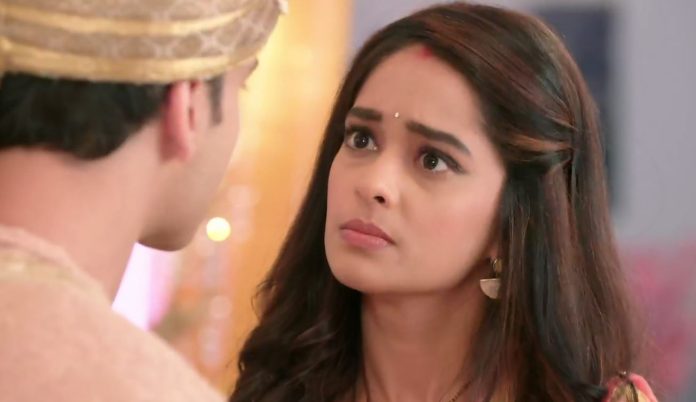 Kumkum Bhagya 6th December 2021 Written Update Wow twist Prachi splashes the water on Rhea’s footprints. Pallavi yells at her and asks her how dare she disturb the rituals of Rhea and Ranbir’s marriage. Prachi asks her to think if the rituals done by a wrong person will bring happiness or chaos in the family. She calls Rhea a wrong person to enter their family. She breaks Ranbir’s garland and shocks him. Rhea stops her and asks what is she doing. Prachi shouts that its not a valid marriage. She tears away Rhea’s garlands as well. Rhea raises hand on Prachi, who stops her and warns her to just stay as a sister and not dare to become her Sautan/the other woman in her husband’s life.

She gives a befitting reply to Rhea and shows her where she stands in Ranbir’s life. She loses her temper. She angrily slaps Rhea in front of Ranbir and Pallavi. She asks Rhea to know that she isn’t going to tolerate anything now. She gets her bags inside the house. She rebukes Rhea and calls the marriage a fraud. Rhea insults Prachi and asks Pallavi to throw her out. She accuses Prachi for snatching her husband Siddharth. She reminds Prachi how she was caught with Siddharth. She asks why did she come to claim Ranbir now.

Prachi tells that she isn’t wrong and she will not accept any nonsense. Rhea loses Ranbir even after marrying him, when Prachi calls it invalid. Rhea goes mad in anger. She asks Ranbir to defend her. Prachi tells that she didn’t divorce Ranbir, he is still her husband, Rhea won’t decide about their relation, because Rhea doesn’t know the meaning of a marital relation. She lectures Rhea. Pallavi and Ranbir are speechless, when they see Prachi’s daring side for the first time. Prachi is going against Rhea to save her own marriage. Keep reading.

Prachi asks Ranbir to make his ego away and think of her once. She wants him to take one step ahead to hold her hand. She tells that she used to miss him always, she has come now, he should come ahead and hug her, it will show that he trusts her. She pleads him to hold her hand and end their distance. Prachi cries with hopes. Rhea calls it enough and asks Prachi to get lost.

Prachi warns her to shut up and not dare to separate them. She tells that Rhea can’t separate them, because she has two reasons to unite with Ranbir. Pallavi asks Prachi to stop her drama and just go away. She tells that Ranbir and Rhea’s marriage is decided, and it will take place. Prachi doesn’t listen to Pallavi’s orders. She tells that she will talk to Ranbir. She is ready to obey his decision. She asks Ranbir to hold his heart and ask if he still misses her. She tells that she loves him, she doesn’t need to show the evidence to prove her love. Rhea throws Prachi out of the house.

Ranbir yells at Rhea and asks her to leave Prachi’s hand. Rhea and Pallavi didn’t expect Ranbir to melt down his heart. Ranbir asks Prachi why did she come so late when she knows that he loves her. He confesses that he loves her and he missed her every day, he is just lifeless without her. He tells Prachi that he loves her. Prachi runs to hug Ranbir. They have a moment of union. Siddharth and Dida get happy for Ranbir and Prachi’s union. Rhea watches them in shock.

Rhea screams no. Her imagination comes to an end. Pallavi and Ranbir ask her what is the matter. They find Rhea tensed. Pallavi asks Rhea to complete the last round. Rhea realizes that she was just daydreaming, Prachi didn’t arrive to stop the marriage. She gets relieved that she completed the marriage rounds. She thinks her lie to Siddharth would make Prachi believe that Pallavi also wanted Prachi out of the house. Ranbir takes the Kumkum to fill in Rhea’s hairline. Prachi runs to the banquet hall.

She enquires about Ranbir Kohli’s marriage. Ranbir imagines Prachi in Rhea. His weird hallucinations make him happily fulfill the marriage rituals. Prachi reaches there and finds Ranbir happily marrying Rhea. She wants to stop him. She runs so much to reach him, that she ultimately faints down without making any noise. Ranbir puts the mangalsutra in Rhea’s neck. Prachi later gains consciousness and finds herself lying in the banquet hall. She learns that the marriage is completed, the groom, the bride and all the guests left. She asks the staff about Ranbir. She can’t believe that Ranbir married Rhea.

She tells that she will not let Ranbir break her heart. She vents out her frustration over the promises broken by Ranbir. She gets exasperated over her life’s situation. She was waiting for Ranbir to return to her, but feels he has gone too far from her. She thinks his annoyance was just a drama, he had to just marry Rhea, he defamed her and cheated her. She pledges to take revenge on the guy she loved the most. She feels her sister didn’t value her trust and cheated her. She wants to return the same pain to Ranbir and Rhea. She tells that she will give an answer to both of them for their betrayal.

She doesn’t want to cry or plead now. She gains strength. She wants her rights back. She isn’t alone, but carries a baby in her womb now. She can’t let them play with her baby’s life. She tells that she will not let them prosper, when they destroyed her life. She goes to Kohli house to answer Ranbir and Rhea for their evil deeds. Pallavi and Vikram welcome Ranbir and Rhea home. Vikram tells Dida that he didn’t see Pallavi so happy before. Prachi reaches there. Pallavi welcomes Rhea into the house. Rhea enjoys her Grahpravesh. She always wanted to become Ranbir’s wife. Her dream gets fulfilled.

Ranbir misses Prachi and stays upset. Pallavi blesses Ranbir and Rhea. Prachi arrives there. She tells Pallavi that she can’t bless them, because they didn’t get married. Prachi tells that Ranbir is paired up with her, she is Ranbir’s wife and will always be. The Kohlis are shocked to see Prachi at the door. Prachi asks Pallavi not to link Ranbir with Rhea. Ranbir thinks if he is imagining or Prachi has really come back. Prachi boldly enters the house and picks a water jug to splash over Rhea’s footprints. Rhea breaks her silence. Prachi asks her to react in anger, since her evil plan has flopped. Keep reading.

Reviewed Rating for Kumkum Bhagya 6th December 2021 Written Update Wow twist: 5/5 This rating is solely based on the opinion of the writer. You may post your own take on the show in the comment section below.