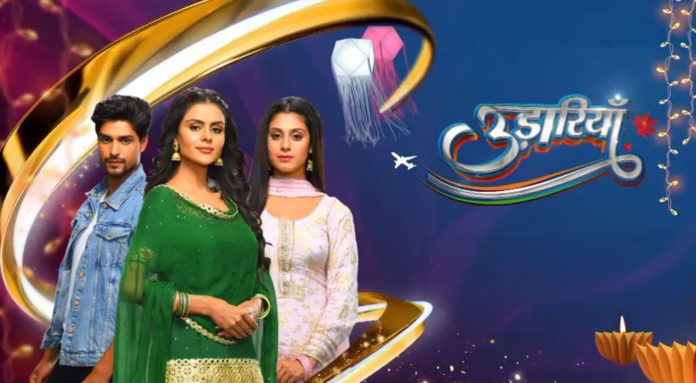 Udaariyaan 5th December 2021 Written Update New track Fateh makes an apology to Buzo as well before making a leave from the village. Buzo is shocked to see him. He asks Fateh if he missed the flight. Fateh breaks down and regrets his bad behavior towards his best friend. He counts the favors Buzo did on him and is grateful. He narrates to Buzo how he faked the marriage with Jasmin and then left her by breaking her dreams, after knowing her evil. Buzo asks him to return to the family, but Fateh doesn’t want to go back. Fateh tells that his return will give hopes to Khushbeer to bring back Tejo home.

He tells that Khushbeer will try to unite Tejo and him, when she is proceeding in her life with Angad. He feels Angad really loves her. Buzo tells that Tejo just loves Fateh. Fateh doesn’t think he deserves Tejo, and wants her to stay happy without him. He tells that he has a big burden of guilt on his heart, he can’t face Tejo after hurting her so much. He wants Tejo and his family to hate him. Buzo asks him not to make such a sacrifice. Fateh decides to go afar, just like Tejo. Jasmin vows to ruin Fateh’s life, and also holds Tejo responsible for her destruction.

On the contrary, Angad keeps Tejo away from Riya’s matter and infuriates her. Tejo asks him why does he interfere in her life and help her when its about Fateh and Jasmin. She tells that she wants to help him the same way as a friend. Angad yells that its not Fateh and Jasmin’s matter at his place, its about his daughter and he will handle it. Tejo gets to see a new side of Angad. She understands how hurt he is that he isn’t able to rejoice a moment with Riya, because of some huge problem.

She wants to solve the problem, while he knows that she can’t help him in any way. He doesn’t want to involve Tejo in the legal mess. Tejo and Angad get into a loud argument. Jasmin and Fateh decide to go ahead with their goals. Jasmin wants her revenge on Fateh, whereas he wants a peaceful isolation to repent for his sins. A new track will begin. What will Jasmin do against them? Will Jasmin’s evil plans bring FateJo together? Keep reading.

Tejo finds Riya crying and attempting to flee from the house. She stops Riya from leaving. Riya angrily slaps Tejo. Still, Tejo calms her down with a hug. Riya tells that she doesn’t want to go to the hostel. Tejo thinks of the reason that Angad has made Riya away from him. Angad sinks in sorrow by having some drinks, while Tejo takes care of an injured Riya. Tejo does her aid. Meanwhile, Fateh wants to go somewhere far. He misses Gurpreet. Sweety is shocked to find Jasmin sitting outside the gate. She asks Jasmin why didn’t she go to Canada. She enquires about Fateh.

Jasmin tells Sweety that Tejo is responsible for her sorrow. Tejo tells a nice story to Riya. Riya tells that she just wants to stay with Angad. Tejo tells that she will talk to Angad and stop Riya from going to the hostel. Angad gets a hangover. His servants take care of him. They ask about Tejo. Angad goes to meet Tejo. Riya gets scared that Angad will see her and scold her. Tejo hides Riya in the bathroom. Tejo rebukes Angad for his dual personality.

She tells that she doesn’t know this Angad who doesn’t understand a little girl’s pain. She lectures him about not handling his own daughter, when he can sacrifice himself for others. She tells that he can’t stop her from interfering in his life. Angad learns that Riya isn’t in the room. He panics and asks the servants to find her. Tejo tells him that Riya is with her. Jasmin tells Sweety what Fateh did with her. She adds that Tejo always wanted to make Fateh away from her. She feels destroyed and defeated.

Sweety consoles Jasmin. Tejo tells Angad that Riya is with her since the night. He asks her to get Riya outside. She asks him not to send Riya to the hostel and fulfill her wish. He tells that its impossible. He asks her not to get involved in his personal matter. She tells that he has always supported her and protected her from sorrow, she will also be a good partner for him. He doesn’t want her to get rigid. She tells that she will not let him meet Riya until he tells her the truth. She adds that he can’t leave Riya to the hostel without her consent. She tells that Riya was trying to run away.

Angad is angry that he is handling his life all alone, Riya is the dark side of his life, he doesn’t want anyone to become a part of his dark side. Jasmin eats the food and thanks Sweety. She asks if she can stay with her for a few days. Sweety goes to answer her parents about Jasmin. Sweety’s mum doesn’t want her to have any terms with Jasmin, who ruined her own sister’s house. She wishes that Jasmin doesn’t return to the village, else she will just face the humiliation. Jasmin hears these bitter things and cries. Tejo asks Angad to not send Riya to the hostel, because she already promised Riya.

She requests Angad. Angad promises her and asks her to get Riya outside. Tejo brings Riya to Angad. Angad hugs Riya and loves her. Tejo unites them. Sweety apologizes to Jasmin and makes her leave the house. She advises Jasmin not to return to their village. Jasmin asks Sweety to stay in touch with her. Sweety lends her some clothes and necessities. She also hands over some cash to Jasmin. Jasmin leaves her house. She tells that she will soon take her revenge on Tejo and Fateh.

Tejo doesn’t know why she had to go away from her family. She thinks her motive is to solve Angad and Riya’s problem. She still misses Fateh. Fateh and Jasmin go to the bus station to leave their village. Fateh have the memories of Tejo. He wishes that Tejo always stays happy. Jasmin curses Tejo. She doesn’t want Tejo to learn that Fateh and she got separated. Fateh and Jasmin leave the village with different motives on their minds.

Reviewed Rating for Udaariyaan 5th December 2021 Written Update New track: 4/5 This rating is solely based on the opinion of the writer. You may post your own take on the show in the comment section below.