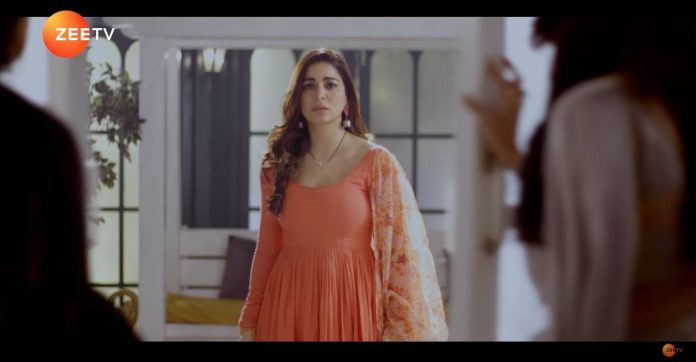 Kundali Bhagya 6th December 2021 Written Update New Leap Preeta gets caught by Rajiv and Sonakshi, who sight her while finding Pihu. They don’t want Preeta to reach Pihu. Preeta is confronted by the goons and falls in an unexpected trouble. Sonakshi thinks of killing Preeta and getting rid of her by using the fake kidnapping. She finds Preeta attempting to run away. Rajiv throws the cartons away and tries to catch Preeta. Sonakshi throws a glass bottle and hits Preeta’s head. Preeta gets hurt and sees the blood on her hand.

Her head bleeds and she falls down. Sonakshi attempts to leave from there before Preeta learns about her. Preeta catches her foot and makes her fall. Sonakshi screams. Preeta hears her voice and identifies her. She realizes that Sonakshi is the mastermind behind Pihu’s kidnapping. Preeta will be accused as per Sonakshi’s plan. She will be proved as a careless mother for Pihu and thrown out of the household. Kareena asks Preeta to leave and never come back.

Even Kritika and Karan ask Preeta to go away. Kareena tells that Preeta is the root of all their problems. Preeta is thrown out by Kareena and Sherlyn. Sherlyn takes her revenge by ousting Preeta. There will be a leap coming in the show. Karan and Preeta will get separated. Another hopeless twist as expected. Will Sonakshi succeed to take Preeta’s place in Karan’s life and family? Keep reading.

Earlier in the show, Sonakshi asks Pihu not to cry. Rajiv tells that he doesn’t think Pihu is Sonakshi’s daughter, because the latter is so insensitive. Sonakshi tells that she will give him money. He worries that his team will double cross him. She asks him not to panic. She tells her new plan. She tells him that they will take Pihu home, then Karan will give him the money happily. Rajiv agrees to her plan. Preeta gets caught by the kidnappers and gets attacked, but she happens to see Sonakshi there. Sonakshi gets exposed, when Preeta learns that Sonakshi is the evil mastermind of the entire kidnapping plan.

She shouts Pihu. Pihu responds to her and shouts. Sonakshi attacks Preeta to stop her from going to Pihu. Preeta falls down hurt, but manages to catch Sonakshi. She identifies Sonakshi. Pihu cries and asks the goon to leave her. A goon pities her and frees her. Rajiv also hits on Preeta’s head to faint her. Sonakshi sees Preeta’s wound on the head. Rajiv tells that they can kill Preeta. Sonakshi decides to keep Preeta alive. Sherlyn tells Simmi that she will go inside and meet Sonakshi.

Simmi ties up Shrishti and Sameer. Pihu thanks the goon for helping her. She tells that she wants to meet her mum. He tells that it has much danger. Sherlyn meets Sonakshi and informs about Sameer and Shrishti, who were called here by Preeta. Sonakshi asks is Karan coming. Sherlyn tells that Karan isn’t here. Pihu runs to Preeta. Goon lies to Rajiv. Preeta gets conscious on hearing Pihu’s cry. Sherlyn hides from Preeta, while Sonakshi puts the veil on her face. Preeta hugs Pihu and cries.

Preeta tells that she is with Pihu, nothing will happen to them. Sonakshi snatches Pihu from Preeta. Preeta gets angry on Sonakshi. Sherlyn thinks to cover her face and go to help Sonakshi. She goes to Simmi to get a burqa. Preeta asks Sonakshi what does she want. She demands her to remove her veil and show her face. Pihu unveils Sonakshi and shows her face to Preeta. Sonakshi angrily throws away Pihu. Preeta catches Pihu. She asks Sonakshi why did she kidnap Pihu. Sonakshi demands the rights of Luthras’ bahu and Karan’s wife, because she is Pihu’s mum. Preeta asks what is she saying.

Preeta tells that she will not let Sonakshi enter her house. Sonakshi tells that she will not spare Karan and the family if they reject her. She threatens of killing everyone. Preeta tells Pihu that she will take her home safely. Sonakshi points the gun at Preeta and says her game is over. She steps on Preeta’s dupatta. Preeta makes her fall down. She picks the gun and points at the evil gang. Sherlyn takes Simmi’s burqa and goes to help Sonakshi. Pihu faints down. The goon tells that he will help her. He gives Pihu to Preeta. Preeta points the gun at Sonakshi and rebukes her for risking her own daughter’s life. Preeta flees in the car.

Sonakshi asks the kidnappers to stop Preeta from reaching the house. Sherlyn asks Sonakshi to just call Karan, instead following Preeta. Sonakshi calls up Karan. A lady calls Karan and informs about Pihu. The family was hoping that they will learn about Pihu. Sonakshi calls Rakhi to reach Karan. Sonakshi tells Karan that she is sending a location on Vinod’s phone. She adds that she found out the kidnappers’ location. She asks Karan to come quickly. Karan and Vinod rush to rescue Pihu. Sherlyn tells that Sonakshi has to convince Karan. She adds that she will accuse Preeta and prove her a bad bahu in front of the Luthras. Keep reading.

Reviewed Rating for Kundali Bhagya 6th December 2021 Written Update New Leap: 1/5 This rating is solely based on the opinion of the writer. You may post your own take on the show in the comment section below.