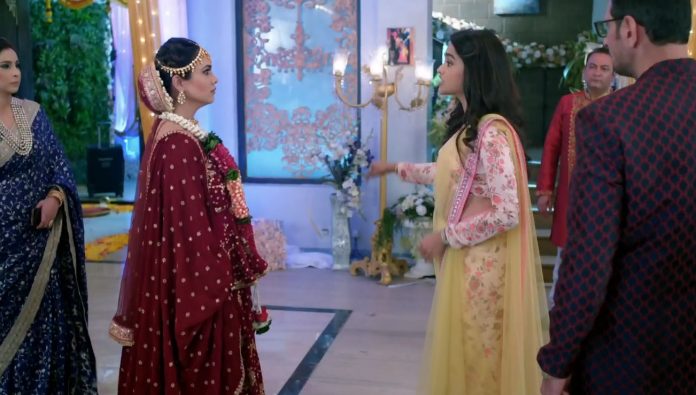 Kumkum Bhagya 7th December 2021 Written Update Prachi ousts Rhea Pragya tells Rhea that she is Ranbir Kohli’s first wife, and Rhea is the second wife. Rhea shouts Prachi aloud. Prachi doesn’t get scared and makes herself sound more loud. She tells Rhea that if the first wife is alive, then the husband can’t remarry. She explains the legal laws to Rhea. Rhea, Pallavi and Vikram realize their mistake of not getting Ranbir and Prachi divorced and proceeding with the marriage. They believed Sushma, that Prachi will never turn back and not come in Ranbir’s life. They didn’t know that Prachi will come to stop the marriage and claim her rights on Ranbir.

Prachi tells Rhea that she is Ranbir’s wife, she isn’t divorced to him, and according to the laws, Ranbir and Rhea’s marriage is null and void, its not a valid marriage. She shows the door to Rhea. Rhea is left shocked. Prachi declares that Rhea’s marriage is null and asks her to not have any hopes from Ranbir or her assumed in-laws. Prachi ousts Rhea from Ranbir’s life. Prachi doesn’t have any apology this time. She wants Ranbir to apologize to her for his big deceive. Rhea goes mad in anger. What move will Rhea take against Prachi? Keep reading.

Earlier in the show, Ranbir misses Prachi and stays upset. Pallavi blesses Ranbir and Rhea. Prachi arrives there. She tells Pallavi that she can’t bless them, because they didn’t get married. Prachi tells that Ranbir is paired up with her, she is Ranbir’s wife and will always be. The Kohlis are shocked to see Prachi at the door. Prachi asks Pallavi not to link Ranbir with Rhea. Ranbir thinks if he is imagining or Prachi has really come back. Prachi boldly enters the house and picks a water jug to splash over Rhea’s footprints. Rhea breaks her silence. Prachi asks her to react in anger, since her evil plan has flopped.

Prachi argues with Rhea and reminds her the evil plans which got ruined. She asks the servant to clean the stains from the floor. Pallavi asks Prachi to stay in her limits. She yells at Prachi and taunts her about Pragya’s upbringing. She tells that Kumkum is a pure thing. Prachi tells that she knows it well, Pragya has taught her everything and she values Kumkum a lot. Pallavi orders her to leave the house. Prachi goes to confront Ranbir. She breaks his garlands in anger. Pallavi calls the security to throw out Prachi. Prachi tells that she broke the garlands and now she will break their relation.

Rhea asks Prachi to leave. She doesn’t want to tolerate any misbehavior. Prachi tells that Rhea has always misbehaved. She adds that she has come home and now she will not leave, she has the rights of Ranbir’s wife. Dida gets happy watching the drama. Vikram interrupts Prachi. Prachi tells him that she used to think of everyone before, but now she will think of herself, she will stay in the house. Rhea asks Ranbir to stop Prachi. He asks Prachi why is she doing this. She asks him if he really loved her that he is marrying her sister. Rhea tells that her marriage with Ranbir would have happened long time back.

Prachi tells that Ranbir loved her and married her by her self will. She asks Rhea how can her marriage happen with Ranbir when he is already married to her. Rhea tells that Prachi and Ranbir’s relation is over. Prachi adds that her relation with Ranbir will never end. Ranbir feels happy as well. Pallavi asks Prachi to stop the drama and get out. Prachi remembers what Siddharth told her. She tells that Pallavi mocked her life and relation. She asks why didn’t Pallavi give her the deserved love and respect.

She counts Pallavi’s respect. She tells that she did everything because she used to respect her in-laws, but now she has to keep her duty as a wife. She asks Pallavi to tolerate a bit, as she made others tolerate till now. She asks the guests to leave since the marriage drama is over. Prachi doesn’t listen to anyone. She makes it clear that she is Ranbir’s wife and Rhea’s sister, she knows that their marriage is not valid. She tells that she will not tolerate any unlucky shadow in her family.

She shouts that she is Ranbir’s first wife and Rhea is the second wife, who doesn’t exist in the society. She reminds the laws to Rhea and calls the marriage null and void. The family is shocked. Dida likes the bold side of Prachi. Prachi nullifies Rhea’s marriage and snatches all her rights. Rhea raises hand on Prachi, who stops her and warns her not to become her Sautan. She asks Rhea to just stay as her younger sister, else she will get a slap by her elder sister. She tells that she will explain her real place in the house. She has identified Rhea’s evil face. She asks Rhea not to dream of becoming her Sautan.

She asks Ranbir did he go blind and mad, that he forgot that he is still her husband. She asks him why did he marry Rhea when he knows the laws. Rhea asks Pallavi and Vikram to throw out Prachi, who doesn’t deserve to stay with them in the house. She tells that Prachi was with Siddharth in he hotel room that day. Prachi gives her a tight slap when Rhea comments on her character. She tells that she will not hear a word against her. Vikram calls it enough and asks Prachi to leave. Prachi apologizes to him. She tells that she respects him a lot, but she is helpless.

She adds that he always supported Pallavi and believed Rhea. She asks him not to interfere in her decision. Dida tells that she is very happy to see Prachi fighting for her rights. Ranbir asks Prachi why didn’t she come before. He tells that she also knew that they are a couple and could have come back, instead coming on his marriage day. She thinks of telling him about her pregnancy. She goes to tell him that she is pregnant. Ranbir asks her to answer, why didn’t she come before and suddenly decide to return in his life. Rhea asks Ranbir not to listen to Prachi.

Ranbir wishes that Prachi apologizes to him and comes back in his life. He really wants her back. Prachi thinks he will always hate her, because he had stained her character. He thinks he will always love Prachi, he got the peace and love back in his heart on seeing her, he wants to always stay with her. She thinks of her hatred for Ranbir, after all he cheated her. He asks her why did she come today. She tells that she didn’t know he will stoop so low and not value their marriage, she didn’t know that he will marry her sister. She further adds that both Ranbir and Rhea are disgusting.

Rhea tells that they are together and don’t need Prachi. Prachi shouts that its her house and she holds the right on the house. She asks Rhea to leave the house. Pallavi tells that she will call the police and get Prachi thrown out. She informs the police about Prachi. Ranbir and Prachi exchange a stare with grief and annoyance. Pallavi asks Prachi to leave before the police comes. Prachi tells that police will come and take Rhea who doesn’t belong to their family. She isn’t scared of the police.

Pallavi asks Ranbir and Rhea to come for the post-marriage rituals. Prach doesn’t think Ranbir will do the rituals. Pallavi calls Prachi unwanted. Ranbir tells Prachi that he loved her and married her. Prachi questions his faith. She tells that doubt often comes with conspiracies. Rhea finds Ranbir still standing with Prachi. She holds his hand and takes him for the rituals. Prachi watches them. Keep reading.

Reviewed Rating for Kumkum Bhagya 7th December 2021 Written Update Prachi ousts Rhea: 5/5 This rating is solely based on the opinion of the writer. You may post your own take on the show in the comment section below.