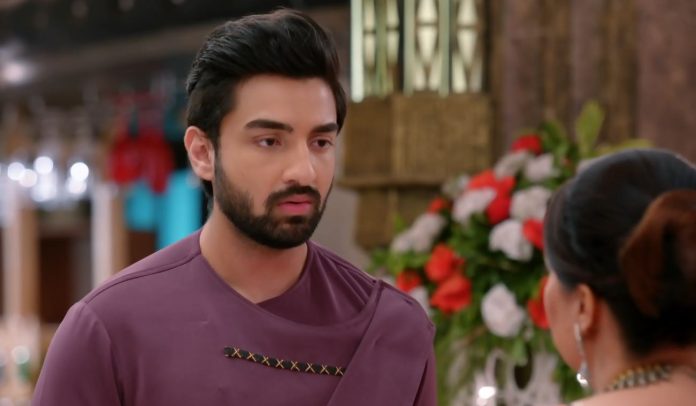 Bhagya Lakshmi 8th December 2021 Written Update Rishi caught Malishka tells Kiran that everything is fair in love and war, she can leave Viraj in the mandap for her love for Rishi. She tells that she will ruin Lakshmi’s house. Kiran meets Rishi and tells him that Malishka loves him a lot. She asks him to stop Malishka from marrying Viraj. Rishi decides to stop Malishka and Viraj’s roka. He tells Ayush that he is determined to do whatever he decides. He tells that he will not let Malishka get married to Viraj.

Ayush knows his madness. He thinks Rishi will not let Malishka’s roka happen if he has decided it, but he doesn’t know what will Rishi do now. Rishi reaches Malishka on her Roka day. He tells her that he loves her a lot and can’t afford to lose her. He asks her to think if she can get away from someone who loves her a lot. Malishka hugs him and cries. Lakshmi finds them hugging and is shocked.

Rishi gets caught by Lakshmi when he comes in front to get his phone. Lakshmi catches him and confronts him for his lie that he is going to his office. Ayush and Malishka cover up for Rishi so that Lakshmi doesn’t doubt Rishi. Ayush doesn’t want Lakshmi’s heart to break. Rishi makes a story and fools Lakshmi. Malishka tells that Rishi and Lakshmi have proved their love once again. Lakshmi tells that Viraj will also love Malishka the same way. She leaves with Rishi and Ayush. Malishka tells that she can’t wait for one year for Rishi, he will not leave Lakshmi later, she will lose him forever.

Kiran asks her if she wants to cancel the roka. Malishka tells that Rishi should have worried now, he will have the fear of losing his love now, this roka should happen to fill that fear in Rishi. Kiran agrees to manipulate a bit just to scare Rishi. Lakshmi returns home and offers help to Rishi. Ayush asks Lakshmi to select Rishi’s clothes for the roka, so that they look handsome. Lakshmi tells that Rishi is more handsome than Ayush. She thinks Rishi has come to pick her from Malishka’s house because he can’t live without her. She thinks of his gesture as of love. She goes.

At the roka function, Dadu and Viraj wait for Malishka. Malishka arrives with Kiran. She hugs Abhay. Abhay wishes her for the Roka. Dadu laughs seeing Viraj and Malishka being so formal. Malishka thinks she is just pretending to be with Viraj to get Rishi back. She thinks her plan will make her win Rishi. She asks about Rishi and Lakshmi. Dadu tells that they will be coming. He asks Malishka to go and take rest until the pandit calls her for the rituals. Kiran takes Malishka with her. Dadu teases Viraj for smiling so much and blushing. Virender and family arrives. Dadu is happy to meet Lakshmi.

Virender tells that he is possessive about his daughter, Lakshmi. Dadu makes Lakshmi his granddaughter. Rishi asks Dadu about Malishka. Dadu tells that she is in the makeup room. Rishi tells that he will meet Viraj and come. He goes to meet Malishka. Kiran asks him to stop Malishka, who loves him a lot and is going to ruin her life in her obstinacy. Rishi rushes to stop Malishka. Virender wonders why is Ayush so worried. Karishma stops Lakshmi from going after Rishi. Virender wants to ask Ayush the problem. Ayush recalls Rishi’s words. He goes after Rishi. Rishi asks Malishka not to marry Viraj.

He tells that Viraj can’t love her madly as he loves her. He adds that he loves her a lot, he belongs to her only. She asks him not to fool her. He asks her to stop playing this game to make him feel jealous. She tells that he would be scared now. He admits that he is really scared. She asks him to marry her, else she will marry Viraj. She tells that she will get her love if he marries her. He doesn’t want to upset Neelam by going against her. He tells that he can’t leave Lakshmi so soon. Malishka asks him to forget her. Virender asks Ayush the matter. Ayush doesn’t tell him anything. He lies to Virender.

Devika teases Ayush about Shalu. Ayush calls Shalu to pass some time and end his stress. They both pass time and have a cute talk. They end up arguing. Rishi asks Malishka to understand his situation, he can’t cheat Neelam and leave Lakshmi even if he wants to marry Malishka. He can’t hurt his mom and family. He tells that Neelam also wants to make Malishka his wife but after one year. He asks her to understand that Neelam loves him a lot. He reminds her what had happened when they tried to marry. Malishka understands him and calms down. Stay tuned.

Reviewed Rating for Bhagya Lakshmi 8th December 2021 Written Update Rishi caught: 3/5 This rating is solely based on the opinion of the writer. You may post your own take on the show in the comment section below.