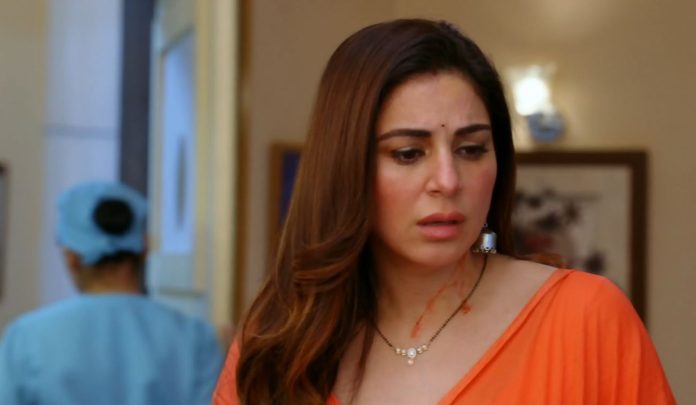 Kundali Bhagya 7th December 2021 Written Update News for Preeta Sonakshi and Sherlyn easily fool Karan and the Luthras into believing their false story. This evil plan comes from Sherlyn’s mind, who asks Sonakshi not to send the kidnappers after Preeta and spare Preeta’s life, just to make Preeta’s life hell. She advises Sonakshi to call Karan and cry to make him believe that she is fallen into real danger. She asks Sonakshi to inform Karan about Pihu’s location. Sonakshi executes the plan and calls Karan. She speaks in a terrified voice and asks Karan to reach the kidnappers den in time and save both Pihu and her. Karan doesn’t know to believe her or not, but decides to take a chance for the sake of Pihu.

Karan and Vinod rush to the location sent by Sonakshi. Sherlyn asks Sonakshi to act unconscious in front of Karan and gain his sympathy. Sonakshi gets to see Karan coming. She acts hurt to fool him. Karan finds Sonakshi lying unconscious and asks her to respond. He feels sorry seeing her so hurt. Sonakshi proves that she took the big risk just for her daughter Pihu. Rajiv takes Karan at the gun point, while Vinod and his team surround the kidnappers. Vinod saves Karan, after Rajiv proves that the threat on Sonakshi is real.

Meanwhile, Preeta takes Pihu to the hospital for her aid. She should have taken Pihu home first and then got the aid done. Preeta doesn’t even inform the family. She makes a mistake here. Pihu gets treated by a doctor who seems to know her and her mother well. Preeta asks the doctor how does she know Pihu well. Doctor tells that she has earlier treated Pihu, she always faints down in nervousness. Preeta asks the doctor about Pihu’s mother. Who is Pihu’s mother? Sonakshi or someone else? What truth will Preeta find out? Keep reading.

Preeta rushes Pihu to the hospital. She panics for Pihu. Dr. Bindu attends Pihu and recognizes her. She asks Preeta not to worry. She tells that Pihu faints down whenever she gets nervous. Preeta asks how does she know about Pihu so well. Bindu tells that she knows Pihu’s mum well, she has died after giving birth to Pihu, she used to work in the NGO. Preeta tells that her mum has given Pihu for adoption and now she is her mum. Bindu tells that she had operated Pihu’s mum, and done the delivery that time when Pihu was born, she also loves Pihu as her mum. She tells that she knows Pihu’s medical condition well.

She asks Preeta not to worry for Pihu and wait outside. Preeta gets confused thinking if Sonakshi is Pihu’s mum or not. Bindu adds that she tried to find Pihu a lot, but later got to know about the change of her birth certificate. She realizes that Sonakshi doesn’t care for Pihu, she can’t be Pihu’s mum, she is just using Pihu to win Karan. She realizes that Sonakshi’s aim is to get Karan and Luthra family. She asks Bindu to stay with Pihu until she finishes her work and comes. She requests Bindu not to let Pihu meet anyone.

She hires a cab and leaves for home. She borrows the driver’s phone to call Karan. Karan loses his phone. She calls Shrishti and Sameer, but they are unconscious. She calls the police and asks them to give protection to the Luthra family. Rajiv tells Sonakshi that he doesn’t want to get involved in any police case. He adds that she cheated him. She tells that she can give him much money. He tells that he doesn’t want any money, she is stone-hearted, and useless for everyone. He tells that she is inhumane, she can’t be trusted. Sonakshi threatens to shoot all of them if they dare go against her.

Rajiv snatches the gun from her and threatens her back. They are informed that Karan has arrived. Karan, Mahesh, Bani and Vinod come there with the team. Bani prays for Pihu. Karan finds Shrishti and Sameer lying unconscious there. Sonakshi acts to faint and lies injured, while Rajiv takes Karan at the gun point. Karan asks them about Pihu. Sonakshi gets up to protect Karan. She does a drama and gets Rajiv arrested. Karan asks about Pihu. She tells that Pihu is nowhere, she was tortured by the kidnappers and couldn’t find Pihu. She asks him to find Pihu for her sake. He promises to find her.

He asks her to stay with Sameer and Shrishti. She tells that she won’t get anything by saving Sameer and Shrishti, but she will gain a lot by saving Karan. She doesn’t trust Rajiv. She can’t let Karan get harmed. Karan fights Rajiv and asks about Pihu. Rajiv acts as Sonakshi taught him. Rajiv tells that Pihu is with Preeta. Karan, Mahesh and Bani are shocked. Rajiv lies that Preeta and he had a deal, he had kidnapped Pihu on her saying. Karan yells to find the truth.

Shockingly, Rajiv frames Preeta. He shows Preeta’s phone and dupatta left at the godown. He tells that he has done the kidnapping on Preeta’s saying, she has taken Pihu with her. Karan asks about Shrishti and Sameer. Rajiv lies that Preeta called them to take their help in the planning, just to save her name. Karan asks him to say the truth. Rajiv tells that its all Preeta’s plan. He is threatened by Sherlyn, who forces him to lie against Preeta. Rajiv runs away from there. Karan is in disbelief.

Reviewed Rating for Kundali Bhagya 7th December 2021 Written Update News for Preeta: 3/5 This rating is solely based on the opinion of the writer. You may post your own take on the show in the comment section below.