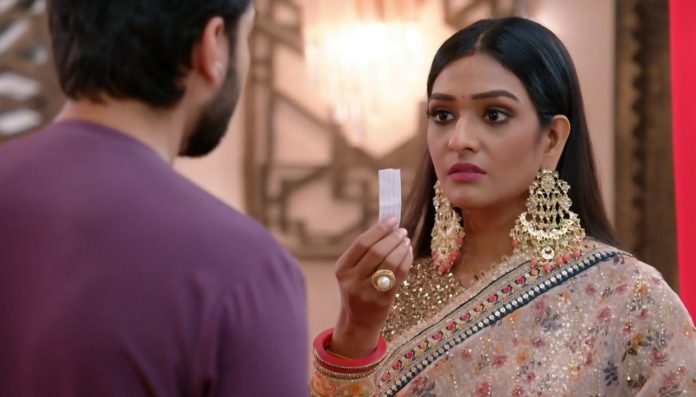 Bhagya Lakshmi 9th December 2021 Written Update Love letter Malishka gives an ultimatum to Rishi. She tells that he just has four days, if he doesn’t marry her after four days, then she will marry Viraj. She tells that she has to marry some how, he will lose her. Rishi tells her that he will marry her because she is the most important person for him. He sees Viraj coming to take Malishka. Viraj holds her hand and takes her. Rishi gets worried seeing them. Rishi writes the love letter for Malishka. He writes that he will marry her, because he loves her a lot. Lakshmi gets a chit from Rishi. She asks him what is it. Rishi gets worried that she may read the truth.

Earlier in the show, Virender asks Ayush the matter. Ayush doesn’t tell him anything. He lies to Virender. Devika teases Ayush about Shalu. Ayush calls Shalu to pass some time and end his stress. They both pass time and have a cute talk. They end up arguing. Rishi asks Malishka to understand his situation, he can’t cheat Neelam and leave Lakshmi even if he wants to marry Malishka. He can’t hurt his mom and family. He tells that Neelam also wants to make Malishka his wife but after one year. He asks her to understand that Neelam loves him a lot. He reminds her what had happened when they tried to marry. Malishka understands him and calms down.

Rishi and Malishka think of their engagement which happened with the families’ blessings. Rishi has fallen into danger after the engagement. The roof shattered and fell over him, leaving him injured. The family panics seeing Rishi’s condition and calls a doctor for him. The pandit reveals about Rishi’s Kundali dosh. He tells Neelam the solution that’s to get Rishi married to a girl who has strong stars in her favor. That’s the reason that they got Rishi married to Lakshmi. Malishka tells Rishi that she remembers everything. She hugs Rishi and cries. Malishka is now getting engaged to Viraj. She thinks Rishi loves her a lot, but is helpless. Lakshmi looks for Rishi. Ayush tells that he didn’t see him.

She goes to meet Malishka. Sonia tells Karishma that Ayush is having a liking for Shalu. Karishma doesn’t want Ayush to marry Shalu. Sonia tells that Neelam is letting Malishka do this roka. Karishma asks her to talk in low tone. She tells that Malishka has gone crazy, she doesn’t want to wait for one year, she wants Rishi to leave Lakshmi right now. Sonia hates Lakshmi. She feels ashamed to call her Bhabhi.

Karishma tells that they love Malishka, but she doesn’t care if Malishka leaves Rishi, they will get someone better than Malishka for Rishi once Lakshmi leaves from his life. Sonia thanks her for the relief. She tells that Rishi and Malishka to get separated. Malishka asks Rishi to secretly marry her for her mental peace, just to give her security. Rishi tells that its not possible, he is already married to Lakshmi. She tells that he has to assure her that he is just of her. She doesn’t care for the families and society.

Dadu and Viraj find Malishka with Rishi. They take Malishka for the roka. Viraj asks Rishi to come. He writes a letter for Malishka, that he will leave everything just to marry her, he is her forever Rishi. He rushes to give the letter to Malishka. He comes across Lakshmi and helps her when she loses balance. She gets the letter from his hand. Dadi asks Virender to take the responsibility of Malishka’s marriage. She tells that Malishka was regarded as a family member before, but now she will be becoming someone’s family. She tells that Malishka should get married to Viraj.

Virender tells that they all love Malishka, but he can’t allow Malishka to snatch Lakshmi’s rights. He knows that she wants to conform that Malishka and Viraj get married soon. She calls him smart to understand her well. Dadu tells that pandit has come and now they shall start the roka rituals. He asks for Lakshmi. He tells that Lakshmi is auspicious for his family, she convinced Viraj for the marriage, she will perform the roka rituals from his side. Lakshmi returns the letter to Rishi. She asks what’s written in it. She doesn’t want to read it without his permission.

She asks why doesn’t he want to tell her. She thinks it will be related to his business. Rishi asks how did she think of this. She tells that she is finding him too worried since a few days. She asks him not to think much about business, and live his life happily. She compliments his caring gesture. Rishi feels guilty for his decision of leaving Lakshmi. She tells that he always conceals his feelings. She asks him to confess his feelings to her. Ayush disturbs their moment. He asks Lakshmi to come for the Roka, Dadu is waiting for him. She asks Rishi to always be with her. Keep reading.

Reviewed Rating for Bhagya Lakshmi 9th December 2021 Written Update Love letter: 3/5 This rating is solely based on the opinion of the writer. You may post your own take on the show in the comment section below.