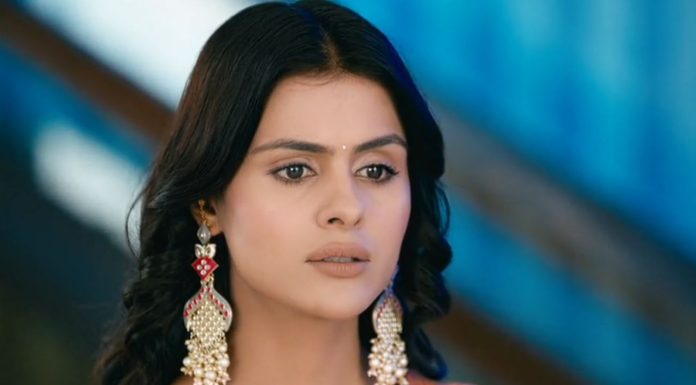 Udaariyaan 10th December 2021 Written Update Enraged Tejo Fateh fights with the robbers at the petrol bunk. Its a close call for Fateh when he gets saved from the bullet fired at him. At the other side, Jasmin proceeds towards her revenge plan execution. She wants to destroy Fateh and Tejo completely, and make their lives hell. She tells that its the first day of her revenge mission tomorrow. She gets fully prepared with her plan. Tejo learns a big truth that Riya isn’t Angad’s daughter. She gets too disappointed with Angad that he had hid this truth from her, by calling himself a good friend of her.

She tells him that he doesn’t has to say anything to her, so she won’t ask him anything, their relation isn’t so strong and close that she asks him about his past. She tells that she has no reason left to stay with him in his house. She packs her bags and leaves Angad’s house, while he attempts to stop her once and explain his side of story. On the other hand, Jasmin finds someone interested in her. She decides to dupe the man for money and makes a plan. Jasmin gets more cunning than before. What is she upto? Will Fateh find a way out of his miseries? Will Angad be able to stop Tejo from leaving? Keep reading.

Earlier in the show, Riya tells that Angad isn’t her dad. She looks for her dad, and leaves Tejo shocked. Tejo fails to understand what Riya is saying. Angad was afraid for the truth to come out. On the other hand, Inspector wakes up Fateh and asks him not to sleep on the roadside bench. He asks Fateh to leave. Fateh reaches the petrol bunk and finds a robbery crime going on. He intervenes to stop the robbers. He bravely fights the robbers, who threaten the workers at the bunk. One of the robber shoots at Fateh.

Fateh gets saved from the robbers’ attack. Police comes in time and arrests the robbers. The petrol bunk workers praise Fateh for saving their lives and also their money from getting robbed. They tell the Inspector that Fateh has bravely fought the robbers and saved them. They thank Fateh for the timely help. Fateh is glad that he could help them. On the other hand, Tejo is shocked to learn that Riya isn’t Angad’s daughter. Riya looks for her dad and is much upset that Tejo lied to her that she has called her dad home. She asks Tejo why did she fake a promise to her when her dad isn’t coming.

Angad tells Tejo that Riya isn’t his daughter. He asks Tejo how did she think of such a thing. Riya doesn’t listen to Angad as well. She behaves rudely with him. He tells her that the truth is her dad will never come back. He handles Riya, who angrily shoves him away. Tejo tries hard to talk to Riya, but in vain. She asks Angad why did he not tell this truth to her before. He tells her that he isn’t married that he will have a child. He adds that he has done a fake engagement with Tejo but with honesty, if he had a past then he would have told Tejo about it before having the fake relationship.

She tells that she assumed Angad to have an issue with his wife and that’s why Riya is with him. He tells that its nothing such. He asks her not to get involved in his life’s problems. She tells that she isn’t interested to know anything now when he didn’t tell her before. Angad finds her upset. He doesn’t want to tell her anything and trouble her, knowing she is already going through a tough phase in her life. Meanwhile, Fateh gets lucky when the petrol bunk worker thankfully offers help to him. The man tells him that he would really like to help a person who came as an angel and saved their lives. Fateh seeks help by asking for a house and a job. The man tells him that he can easily arrange that for him.

He finds Fateh a reliable man. Fateh regrets that he couldn’t give the love and trust to Tejo which she deserved, but is relieved that Angad is in her life now, Angad will be giving her the love and respect she deserves. He wants Tejo to stay happy with Angad. Fateh wishes the good for her, while Tejo is unhappy with Angad’s weird behavior. She wants Angad to share the problems with her if he considers her a friend. Angad tries to convince Tejo and end her annoyance.

Jasmin plans to execute her revenge plan by trapping someone for money. Fateh wishes Tejo stays happy and prays for her. He tells that he will start his new life from now. Tejo also wants to make a new life and go away from every cheat. She tells that she wants to stay in peace, somewhere where no one will cheat her. She thinks even Angad lied to her. She decides to leave in the morning. Fateh just wishes the good for Tejo, from all his heart. Jasmin is also excited to make a new move towards her revenge plans. She tries all the unfair means by fooling people just for money, to step ahead in her plans.

Meanwhile, Tejo leaves from Angad’s house in the morning. Angad doesn’t let her go and becomes a car driver for her, just to apologize and convince her. Tejo realizes his disguise and gets down the car. She still blames him for not telling her the secrets of his life. He asks her to stay back for Riya’s sake. He promises to fix everything. He asks her to at least think that he has valued their fake engagement so sincerely. Tejo leaves in a huff without listening to him.

He gets sad that he has hurt her a lot this time. Tejo comes back to him for Riya’s sake. She tells that she will respect their fake engagement only if he doesn’t keep any secrets. He promises to share everything and convince her over. Tejo and Angad have a moment, while Fateh begins to work at the petrol bunk. Keep reading.

Reviewed Rating for Udaariyaan 10th December 2021 Written Update Enraged Tejo: 4/5 This rating is solely based on the opinion of the writer. You may post your own take on the show in the comment section below.