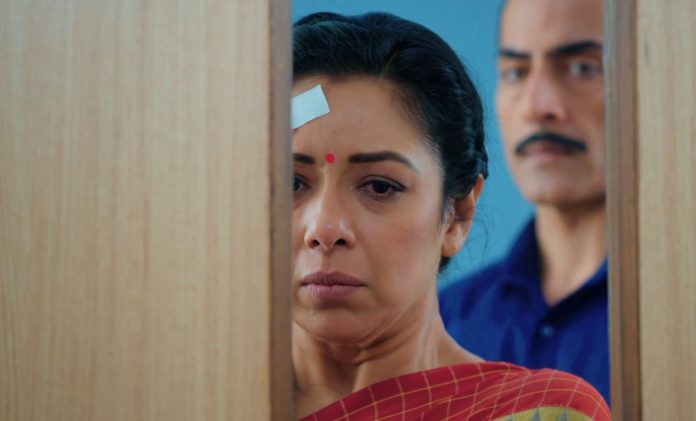 Anupama 11th December 2021 Written Update Vanraj’s game Vanraj gives strength to Anupama to stay well and then look after Anuj. Anupama consoles GK. The family cries for Anuj in worry. Vanraj joins Anupama’s hand in the times of sorrow. Leela feels that Vanraj and Paritosh are with Anupama at this time. She also prays that Anuj gets fine soon. Samar tells that Anuj has really a nice person. He prays for Anupama and Anuj’s companionship. He wishes Anuj gets back to them soon. Paritosh also shoulders Anupama. Kavya alerts the family that Vanraj is playing a big game against Anuj, he hates Anuj a lot, he can never become Anuj’s best friend. The family doesn’t believe Kavya.

Kavya tells them that she knows Vanraj the best. Vanraj finds Anupama crying for Anuj. Kavya tells that everyone will realize it soon that Vanraj is playing a big game. Samar tells that nothing will happen to Anuj. He gives a hope to everyone. Anupama panics when she sees Anuj getting critical. She shouts Anuj and runs to him. Vanraj consoles a broken Anupama. They call the doctor to examine Anuj’s condition. Doctor gives them a calming piece of news, that Anuj is stable now. Vanraj finds Anupama crying and goes to speak to her. He tells that Anuj is stable now, and asks her not to cry. He adds that her emotions for Anuj has proved her love today.

Vanraj motivates Anupama to realize her feelings for Anuj, even she has the same feelings for Anuj, the feelings of love which Anuj confessed to her. He asks her to confess the love to Anuj, since her confession can bring Anuj back to them. Vanraj asks her to just think of herself and her life from now, and forget the rest. He asks her to go ahead and hold Anuj’s hand. He gives a sensible advice to Anupama. He asks Anupama to move on in life towards Anuj. Anupama realizes her feelings for Anuj. Is Vanraj really playing some game as predicted by Kavya? Did he change for real or still the mean Vanraj? Keep reading.

The nurse asks Anupama and the family to go home, just two attenders can stay back. Anupama and Vanraj decide to stay at the hospital. GK cries and tells that he will stay with Anuj. Vanraj tells that he will stay back and be there to get the medicines. He asks GK to go home. Hasmukh convinces GK to go home and take rest. GK asks them to take care of Anuj. Vanraj asks Samar and Paritosh to go home. Hasmukh finds his old son in Vanraj after a long time. He tells that this good side of Vanraj is much wanted, he is his pride after all. Vanraj gets happy with the compliment.

The family thinks he loves them a lot. Kavya tells that he can’t live alone, he is weak hearted and needs his people. Nandini asks Kavya not to fill the filth in their minds. Kavya tells that very soon they all will realize Vanraj’s big game, Vanraj is being in Anuj’s good books for making his career, or maybe he wants Anupama to come back in his life. She suspects Vanraj’s changing personality. Kinjal and Nandini call it enough and send Kavya to her room.

Leela prays for Anuj, who really needs a lot of prayers in his critical condition. Anupama and Vanraj get worried seeing Anuj’s unstable state. They call a doctor. Hasmukh and children return home to tell Leela that Anuj is still in danger. Hasmukh brings GK home. Kavya asks about Vanraj. Paritosh tells that Vanraj will stay back in the hospital with Anupama. She asks why didn’t Samar stay back. He asks her not to start it again.

Paritosh regrets that he had misbehaved with Anuj till now. He cries for Anuj. Pakhi and Samar wish that Anuj get okay soon, because Anupama deserves a friend like him. They count Anuj’s favors on their family. They praise Kinjal who always took a stand for Anupama. They ask Paritosh to sort out his issues with Kinjal and value her. Pakhi asks him not to repeat the same mistake which Vanraj did by disrespecting Anupama. She hopes that Anuj comes back to them. Anupama prays for Anuj that he comes back to them. She tells that Anuj can’t leave her and go. Vanraj watches her in pain. GK gets worried for Anuj.

Hasmukh comforts his tensions. He tells that Anuj will be soon well. GK wants to go to Anuj and see him right away. Hasmukh asks him to keep patience. He tells that Anupama has handed him when he had broken down emotionally. GK knows that women are more stronger than men when it comes to emotions. They praise Anupama. Vanraj asks doctor about Anuj. Doctor tells that Anuj is stable now. He suggests some more tests. He gives the good news that the surgery won’t be required. Anupama sits with Anuj and cries.

She asks Anuj why did he become a hero and risk his life. She wants Anuj to think about her. She expresses her emotions to an unconscious Anuj. Vanraj hears Anupama’s confession. He finds Anupama a perfect person, who has been perfect in all her relations. He thinks Anupama has got Anuj in her life, the relation she is thinking as friendship is much more than that. He wants Anupama to move on with Anuj, after realizing her feelings. He is also afraid to lose her forever. He unites Anupama with Anuj.

Reviewed Rating for Anupama 11th December 2021 Written Update Vanraj’s game: 5/5 This rating is solely based on the opinion of the writer. You may post your own take on the show in the comment section below.