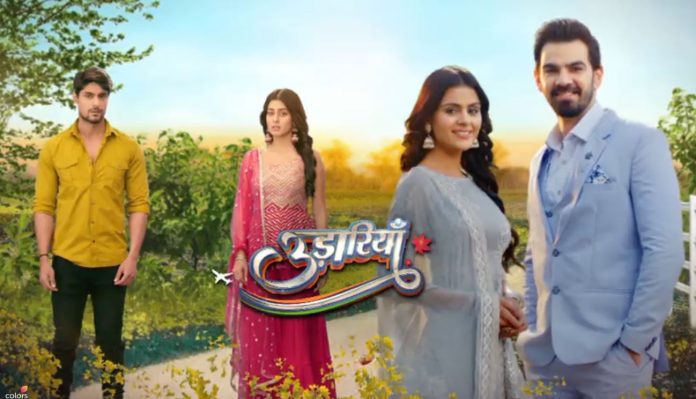 Udaariyaan 11th December 2021 Written Update Fatejo close meet Angad convinces Tejo to return home with her for the sake of Riya. Tejo is glad to meet Riya. Angad and Tejo get into a cute moment when they get down to kiss Riya, and the little girl moves on, bringing them closer. Tejo lands in an awkward moment, while Angad begins to realize his feelings for Tejo. Angad tells Tejo that they have to leave for Gurdaspur for the important meeting. Tejo accompanies Angad. He tells that they shall get the tank filled up on the highway petrol bunk.

He drives to the petrol bunk where Fateh has joined as a worker. Angad and Tejo get close to see Fateh working at the petrol bunk. Fateh didn’t know that he will get tracked by anyone so soon. Jasmin is also finding out Fateh and Tejo to exact her revenge. What will fate bring for Fateh and Tejo? Does Fateh deserve Tejo back after his prolonged repentance? What about Tejo and Angad’s blossoming relationship turning into a real one? Comment your views. Keep reading.

Earlier in the show, Tejo leaves from Angad’s house in the morning. Angad doesn’t let her go and becomes a car driver for her, just to apologize and convince her. Tejo realizes his disguise and gets down the car. She still blames him for not telling her the secrets of his life. He asks her to stay back for Riya’s sake. He promises to fix everything. He asks her to at least think that he has valued their fake engagement so sincerely. Tejo leaves in a huff without listening to him.

He gets sad that he has hurt her a lot this time. Tejo comes back to him for Riya’s sake. She tells that she will respect their fake engagement only if he doesn’t keep any secrets. He promises to share everything and convince her over. Tejo and Angad have a moment, while Fateh begins to work at the petrol bunk.

Tejo and Angad get into a moment because of Riya. She asks him to share his life’s sorrow and problems with her. Angad tells her that they have to leave for Gurdaspur. She insists him to tell her the side of his story which she doesn’t know. He tells her about his brother Arjun and his wife Preet, who died in a car accident, and left Riya in his custody. He tells that Riya is now his responsibility. He tells how much he loved his brother. Tejo feels sorry that he is hiding a big sorrow in his heart, and always keeps smiling.

Angad asks her not to worry much about him. He doesn’t want to tell her anything more. She asks him not to send Riya to the hostel and keep her along with him. He tells that its not possible, he will tell her everything, but later on. On the other side, Fateh shares his life and fate twists with his new friend at the petrol bunk. He tells that he has accepted everything as fate and is trying to move on. He adds that he has done much wrong in life. He is repenting a lot. His friend praises him for being such a good friend.

Fateh recalls the way he had broken Tejo’s heart. He feels he can never be anyone’s good friend. Angad asks Tejo to get ready for the Gurdaspur trip. Next day, Angad and Tejo reach Gurdaspur, and land up at the same petrol bunk where Fateh is working. Fateh can’t imagine that Tejo will be reaching so close to him. Angad and Tejo get too close to see Fateh, but miss out.

Angad and Tejo wait for their turn to get the feul. Fateh goes away to check the card machine. Angad and Tejo talk to some beggar and donate their food. They get busy in their talks. The beggar blesses them to always be together. Fateh goes for having breakfast. The food given by Tejo to the beggar reaches Fateh, when the latter also acts kind and gives his cup of tea to the beggar. The beggar shows him Tejo, but she leaves by then. He tells that she is very good-hearted to give away her food. Fateh thinks of Tejo and misses her.

Jasmin earns money by the wrong means. She helps a lawyer help his clients in the divorce cases by trapping the other party. He tells her that his next client is someone tough to handle. Jasmin assures of duping the next client as well. She asks him to pay her more money, because she has to do her work after making money. She plans her revenge on Tejo and Fateh. She calls Sweety and tells her that she has earned enough money for now, and will follow the same path to earn more money that will enable her to proceed in her revenge plan. She asks Sweety to come and meet her, they shall party and enjoy.

Other side, Angad and Tejo head to the market to enjoy cold Lassi, where Fateh also comes for his work. Tejo misses Fateh when she is with Angad. Angad meets his known people, who get upset that he didn’t invite them in his marriage. He tells that he is just engaged to Tejo. He buys bangles for Tejo on their insistence. Angad wants Tejo to consider their relation and really accept him. Tejo still thinks of Fateh, who is just away. Fateh senses Tejo’s presence around. He fails to see her in the crowded market.

Reviewed Rating for Udaariyaan 11th December 2021 Written Update Fatejo close meet: 2/5 This rating is solely based on the opinion of the writer. You may post your own take on the show in the comment section below.