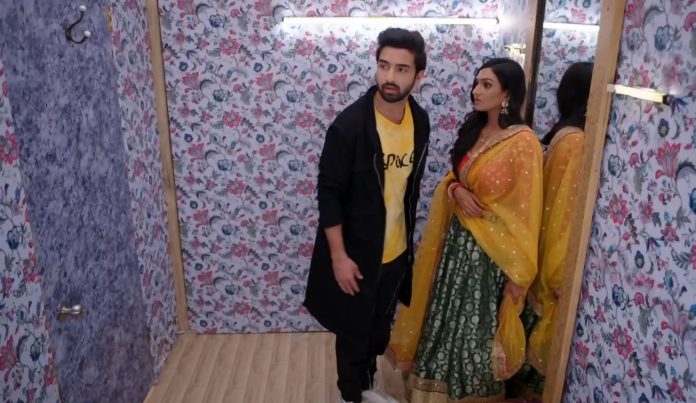 Bhagya Lakshmi 14th December 2021 Written Update Nodus Rishi learns that Lakshmi and Malishka are going towards the changing room. He doesn’t want them to see each there. He rushes there. He sees Malishka outside getting some outfits to try. He rushes to stop Malishka from entering Lakshmi’s changing room. He gets inside the changing room and shocks Lakshmi. Lakshmi sees Rishi and gets surprised. She asks him what is he doing in the mall. She again thinks he has come following her, because he can’t live without her. Rishi makes an excuse to Lakshmi. Malishka hears Lakshmi and asks is it really her inside the room. Lakshmi tells Rishi that its Malishka outside.

Rishi asks her not to reply to Malishka. Lakshmi gets Malishka’s phone there. She tells Rishi that its Kiran’s call for Malishka. Malishka enters the other changing room to hear their conversation. She realizes that Lakshmi isn’t alone, Rishi is with Lakshmi. This makes Malishka upset. Rishi can handle Malishka’s anger, but doesn’t want Lakshmi to know the big truth that he has come with Malishka to buy a dress for her wedding, that he is going to marry Malishka. Rishi leaves from the changing room, and gets confronted by Malishka.

Earlier in the show, Kiran understands Neelam’s concern. Even she wants Malishka’s happiness. She feels helpless. She tells that Abhay has convinced Malishka to marry Viraj. Karishma suggests them to talk to Rishi once. Rishi meets them and overhears a part of their conversation. Ayush and Neha meet in the market. She lies about a nerve catch and seeks his help. Ayush tells that he will take her to the doctor. Neelam hugs Rishi. She tells that she knows Rishi isn’t happy. Rishi tells that Malishka and he always fights, they have decided to walk on different paths now, Malishka isn’t ready to wait for him for a year, and he is helpless to stay with Lakshmi. He tells that Malishka isn’t ready to understand. He makes an excuse and leaves. Neelam is confused.

Rishi tells that he has to rush now. Lakshmi sees Virender there. Virender tells that he had some work with Sudeep. He goes away. Rishi holds Lakshmi when she slips. They have another moment. He asks her to be careful. She thanks him. Rishi also thanks her for the breakfast. Lakshmi gets happy. Viraj and Dadu visit her to take her help for shopping. Elsewhere, Neha thanks Ayush and praises him. Ayush tells that Shalu doesn’t find him right. He tells that Shalu never appreciates him, she always irritates him.

He doesn’t want to talk about Shalu. Neha asks Aysuh to talk to her, instead Shalu. Ayush tells that he already talks to her. He complains further about Shalu. She asks him to take her to a restaurant for lunch. Ayush agrees to take her for lunch, but at her place. Viraj tells Dadu that Lakshmi isn’t happy to see them. Lakshmi tells that Rishi just left, he thought he has come back. She welcomes them home. Lakshmi tells that she will make tea and come. Dadu asks Virender’s permission. He requests them to let Lakshmi help Viraj in finding a good bridal dress for Malishka.

Virender and Neelam ask Lakshmi to go with them. Viraj tells that they won’t pressurize Lakshmi. Lakshmi tells that its a good thing to go and buy the bridal dress for Malishka. She takes care of all her household work. Virender and Neelam ask Lakshmi not to worry for them. Dadu tells Kiran that Malishka will get surprised seeing the best bridal dress. He tells that the marriage has become possible just because of Lakshmi. Lakshmi goes with them. Ayush and Neha come home. Neha acts hurt and takes his assistance. She insists him to lift her. Ayush lifts her. Shalu is shocked to see them close. Neha makes Shalu jealous.

Rishi meets Malishka at her home. They both apologize to each other. She tells that Neelam called Kiran for a talk. Rishi tells her that Neelam had heard their conversation and called Kiran home to request her, Neelam wanted to convince Malishka to wait for a year. She asks him to tell them that they are marrying. Rishi doesn’t want to hurt Neelam’s sentiments. Malishka tells that she has got a bridal dress, she will marry him. Rishi doesn’t like the dress. He asks her to wear something colourful. He remembers his marriage with Lakshmi. He describes Lakshmi’s bridal dress. Malishka hugs him. Kiran finds them together.

Neha asks Ayush to take care of her. Shalu and Ayush get into an argument. Ayush tells that he can’t see Neha in trouble. Shalu gets angry seeing Ayush and Nha laughing and irritating her. Kiran asks Rishi what is she doing with Malishka. Malishka also lies to Kiran. She tells that their affair is over now, she has really moved on with Viraj, she will be happy with Viraj, he is the best guy for her. She convinces Kiran with her lies. She tells that Lakshmi loves Rishi a lot. Rishi gets reminded of Lakshmi. He wants to go. Malishka tells that she is just Rishi’s good friend now.

Rishi and Malishka make an excuse in front of Kiran. Malishka asks him to take her on shopping. She tells that they are the best couple. She wants to tell the truth to Kiran at least. He tells that Kiran might tell the truth to Neelam and then their marriage might stop. Lakshmi tells that she will get confused seeing the wide collection in the mall. She looks for a good bridal dress. Rishi takes Malishka for shopping. She asks him to buy the best one for his bride. Rishi feels guilty of cheating Lakshmi.

Reviewed Rating for Bhagya Lakshmi 14th December 2021 Written Update Nodus: 3/5 This rating is solely based on the opinion of the writer. You may post your own take on the show in the comment section below.