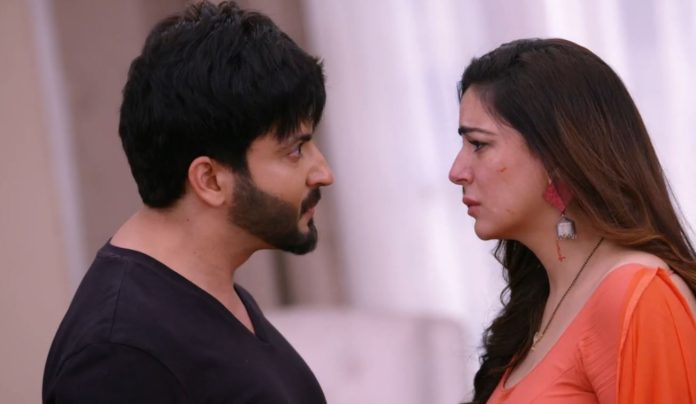 Kundali Bhagya 13th December 2021 Written Update Karan ousts Preeta The family is shocked to know that Pihu is dead. Preeta accuses Sonakshi for getting Pihu killed in an accident. Sonakshi asks Preeta how can she blame her, when Pihu is his own daughter. She tells that Preeta is making a new story and accusing her. Sonakshi does a good drama and cries. Preeta asks her why did she send the truck after her. She tells Karan that Pihu is no more, she didn’t get saved. The family cries for Pihu. Preeta tells that Pihu couldn’t come home to testify against Sonakshi in front of the family.

She reveals that Sonakshi isn’t Pihu’s biological mother, her real mother passed away at the time of Pihu’s birth, the NGO doctor told her the truth that Pihu’s mum was a NGO worker, Sonakshi is not related to Pihu, Sonakshi had brutally killed Pihu. Sherlyn can’t believe this. She gets the Inspector’s call. She asks Karan to speak to the Inspector. Santosh fakes the call to Karan. He tells that Preeta was in the lockup, but could get free because of Vinod. He tells Karan that Preeta was driving carelessly, Pihu died because of her carelessness, she didn’t even make Pihu wear the seat belt. Karan is shocked to know this.

She angers Preeta by blaming her. Preeta asks Karan to believe her. Sherlyn tells that Preeta is lying to them, Pihu is dead because of Karan. She proves that Preeta had paid the 2 crores to the banker and saved Sarla from the loan. She recalls meeting the man and handing over the money to him by taking a disguised look. Karan misses Pihu. He goes to Pihu’s room and cries. Preeta reaches Karan to share his sorrow. He yells at her and asks her not to touch him. He makes Preeta too away from his heart.

Karan accuses Preeta for snatching his Pihu. Sonakshi asks the family if they have a big heart to forgive Preeta, who has killed Pihu. She tells that she doesn’t have a big heart, she can never forgive Pihu. The family develops hatred for Preeta. Bani tells that she hates Preeta, who had snatched Pihu from them. Mahesh defends Preeta. He believes Preeta can’t do such a thing. Kareena asks Mahesh didn’t he see that video, Preeta got Pihu kidnapped to help out Sarla. She doesn’t know if Preeta lied about Sonakshi. She tells that she has seen the truth by her eyes.

Sonakshi tells that the family turned deaf ears now, they will not believe Preeta, they will accept her/Sonakshi and throw Preeta out of the house. Preeta threatens to expose Sonakshi’s truth. She goes to the family and accuses Sonakshi for killing Pihu. The family doesn’t listen to her. Sherlyn supports Sonakshi. Preeta asks Sherlyn why is she making stories against Sonakshi. Preeta tells that Sonakshi will ruin the family. Kareena accuses Preeta for ruining them by snatching Pihu. She asks Preeta if she can get Pihu back.

Sherlyn tells that Kritika went with Preeta, but Preeta didn’t get Pihu home, Pihu knew that Preeta had kidnapped her, Preeta had tortured Pihu and then committed the accident. Preeta tells that the accident was real, it was plotted by Sonakshi. Karan calls it a lie. Preeta tells that she isn’t saying any lie. Karan asks her if everyone else is lying against her. He loses faith on her. She tells that everyone is lying on Sonakshi’s saying. She begs him to trust her. He tells that she snatched their daughter just for the sake of money. Kritika also adds fuel in the fire by blaming Preeta.

She tells that she didn’t know Preeta will do this. Preeta asks does everyone not know her. She tells that Sonakshi is the murderer, she will ruin everything. She pleads with Rakhi and Mahesh to make Sonakshi out of the house. Rakhi tells that Preeta has ruined her family. She orders Preeta to leave the house. Rakhi breaks her silence and shows her disbelief on Preeta. Preeta asks Karan how can everyone ask her to go, when she is Karan’s wife. Karan asks Preeta why did she go there by going against her husband.

She accuses her for not informing him, and instead calling Shrishti and Sameer there. He tells that if she had called him there, then he would have saved his daughter. He asks Preeta to get lost, he doesn’t want such a wife. He declares that Karan and Preeta will never unite now. He asks her to get lost. Sherlyn, Kritika and Kareena also ask Preeta to leave. Bani calls Preeta shameless. She asks Kareena to drag Preeta outside the house and dump her. Kareena and Sherlyn throw out Preeta.

Sherlyn asks Preeta not to wear the mangalsutra when she has no relation with Karan. Preeta warns Sherlyn and asks her not to touch her mangalsutra. Preeta cries in shock when Karan doesn’t stop her. She gets kicked out of the Luthra mansion. She sits outside the door and cries. In the next episode, an angered Karan will oust Sonakshi from the house as well. That’s something good to watch, but how does Prithvi come back in Luthras’ good books? Keep reading.

Reviewed Rating for Kundali Bhagya 13th December 2021 Written Update Karan ousts Preeta: 1/5 This rating is solely based on the opinion of the writer. You may post your own take on the show in the comment section below.