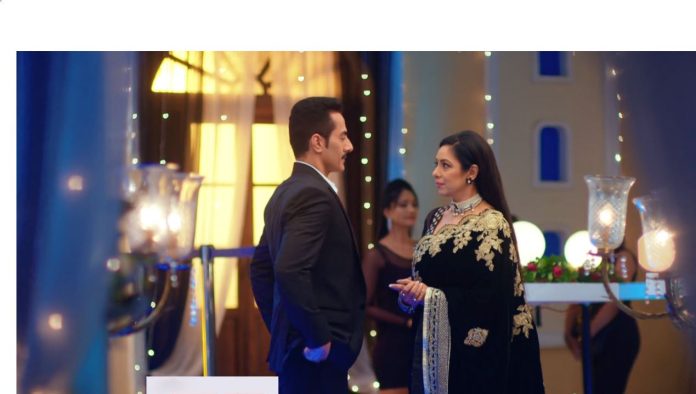 Anupama 15th December 2021 Written Update New entry Anupama picks her bag to leave and starts leaving towards her room. She stops, turns to see Anuj and leaves, giving him a smile. Anuj pinches himself to confirm if everything happening presently is true or not. Anupama talks to GK. Baa on the other side, looks at busy Paritosh with tension. Anupama serves healthy food to Anuj. Initially, he shows reluctance to the food but later enjoys its taste. Anupama gives Anuj a chit saying that she wants to give one chance to their relationship. He confirms it with Anupama and she replies yes with shyness.

Anuj gets up and jumps in joy with Anupama. He tears the pillow and dances with Anupama. Anuj shows half heart on his wrist and another half on Anupama’s wrist and joins it to make a complete heart. All this turns out to be Anupama’s day dream. She beats her forehead and sees Anuj having food. Anuj feels pain and Anupama notices it. Anupama tries to say what is in her mind but fails as Anuj’s pain grows. GK and Anupama get tensed seeing Anuj’s condition. Anuj says he felt a little dizzy. Anupama and GK ask Anuj to take rest. GK asks Anupama to say something to Anuj as he listens to her only.

Paritosh also arrives there and asks what happened? Is everything ok? Anupama tells Paritosh that Anuj feels a little dizzy and will get better after eating medicine. Paritosh takes the try from GK and says he will prepare the dinner on the dinner table. Anupama keeps Anuj’s work papers aside and gives him medicines. She asks him to lie down and makes him sleep. Anupama sees her name on Anuj and her new restaurant project and feels emotional. Next morning Anupama is seen performing pooja and spreading pure smoke (dhoop) everywhere in Anuj’s home. Paritosh is seen sleeping on the sofa, while GK leaves to buy milk informing Anupama. Anupama gives dhoop to sleeping Anuj and smiles with shyness in her eyes.

Bell rings and Anupama opens the door. She sees Bapuji on the door and greets him. Bapuji sees Anuj Kapadia’s name plate on the entrance. He feels emotional thinking and hoping that everyday Anupama will open the door of this house as hers and Anuj’s. Anupama asks Bapuji to come inside. Bapuji tells Anupama that he went to the temple and thought of seeing Anuj in between. He gives a bag of Jalebis to Anupama saying that he brought it for GK. Anupama tells Bapuji that GK went to buy milk. She calls Bapuji inside and gives him water. She asks if everyone is fine in Shah house. Bapuji says everyone is fine.

Anupama asks Bapuji about Kavya’s condition. Bapuji replies that Kavya is the same as before and Vanraj too. He says Kavya is right and wrong both and whatever she is because of Vanraj. Bapuji tells Anupama that Vanraj never understood relations. He tells Anupama that Vanraj’s first marriage worked for 25 years only because of Anupama. Bapuji says that Vanraj was an angry person, ready to fight and Anupama was calm and a person working on relationships. He continues saying that at present both Kavya and Vanraj are both angry persons ready to argue. Bapuji wonders what will happen now? He says he is not finding time to talk because Vanraj is busy and today even has to go for some big meeting.

Anupama says to Bapuji that it’s good that at least Vanraj’s work started again. She tells Bapuji that she is ready to give herself another chance. She correctly explains that she is ready to move on in life with Anuj. Anupama tells Bapuji that she is a little scared thinking that she might become old Anupama, who needed someone’s support to live. Bapuji explains to Anupama that everyone needs support in their lives as earlier too Vanraj and she both needed each other as well as family’s support. He also says to Anupama that the Shah family also needed her support. Bapuji tells Anupama that giving someone and taking someone’s support isn’t wrong. He further explains that wrong is when a person gets fully dependent on someone that he/she fails to do anything. Bapuji says forgetting oneself by thinking a lot for someone else is wrong too.

GK arrives and gets happy seeing Jalebi. Bapuji steals a jalebi and eats it in front of Anupama. Anupama wakes up Anuj and wishes him “Good Morning”. Anuj wakes up and thinks it’s his life’s best morning. Anupama tells him that it’s his medicine time. Anuj tells Anupama that she will ruin his habit. He tells her that he is getting accustomed to her care and handmade food. Anuj says to Anupama that it will become difficult for him to live without her. Anupama says then she will not go anywhere. Both Anuj and Anupama get awkward thinking about what they said to each other. Anuj thinks Anupama may have said it just like that, like he says sometimes.

Anuj gets shocked after reading the news saying that Malvika will soon enter the business world of funding startups. The news also says that Malvika will soon announce her new venture. Anupama asks Anuj to take his medicines as she wants to talk about something important. She sees Anuj busy reading the newspaper and asks him if he is listening to her. Anuj doesn’t reply and thinks that according to the news his Malvika is in Ahmedabad at present. He asks for water from Anupama. He thinks about Malvika being in Ahmedabad. Anupama leaves giving Anuj water. GK and Bapuji feel happy seeing Anuj and Anupama together. They think confessing love for each other is difficult for both Anuj and Anupama.

In his thoughts, GK thinks that Malvika’s entry can increase the distance between Anuj and Anupama. Anuj calls Malvika. He tells Malvika (Mukku) that he was waiting for her call. Anupama hears Anuj telling some “Mukku”, that he is missing her and loves her a lot. She returns with water and flowers in her hands. Anuj steps on Anupama’s flowers while talking to Anupama. Malvika asks Anuj to meet her at “The Ahmedabad Haveli Hotel” with GK as she wants to talk about something very important. She also tells Anuj that she loves him a lot. On the other hand, Kavya thinks about why Vanraj is so happy. She sees Vanraj’s phone and asks him what is happening? Vanraj asks her to find out for herself.

Vanraj asks Kavya to search for a job to keep her mind on track. He asks her to pick up ehr gown which he gave for dry cleaning. Vanraj leaves Kavya wondering. She wonders why Vanraj gave her gown for dry cleaning. Anupama recalls Anuj’s burnt photograph with a woman. She also recalls Anuj talking to some woman with love. She feels tense and jealous, thinking Anuj will tell her about Mukku himself if he wishes too. Her heart on wrist gets washed while washing utensils. This leaves Anupama worried about her and Anuj’s relationship.

In the next episode, Vanraj will tease Kavya by saying that Baa applies Kaala teeka to him whenever he wears a black suit. He continues telling Kavya that Baa applies Kaala teeka to him to save him from women’s evil eyes. Anuj will feel happy about meeting Malvika after a long time. At a party Vanraj will ask Anupama if he is looking good? Anupama will tell him that he is looking different. Vanraj will say that he will have to change as his fate is going to change too.

Reviewed Rating for Anupama 15th December 2021 Written Update New entry: 5/5 This rating is solely based on the opinion of the writer. You may post your own take on the show in the comment section below.