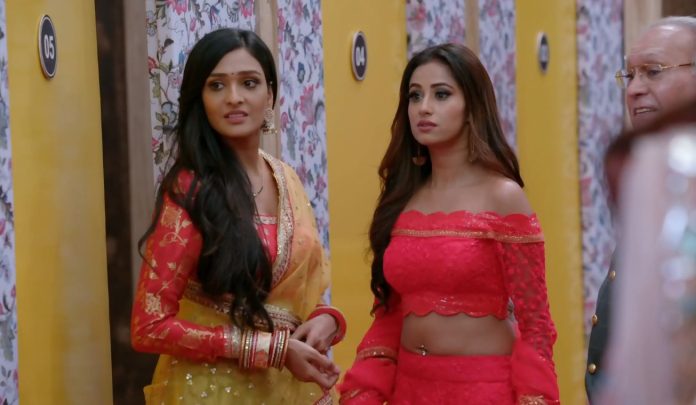 Bhagya Lakshmi 16th December 2021 Written Update Tricky Malishka Rishi and Lakshmi land in a moment of romance, while he helps her in tying the dress strings. Rishi hides from Viraj and Dadu. Lakshmi compliments Malishka for her stunning look in the bridal dress. She tells that even she chose the same dress for her, and the dress reached the right person, the bride. She asks Malishka how did she get the same dress to try. She asks how does Madhu know that Malishka is going to get married. The mall lady Madhu tells that Malishka’s husband has selected this dress for Malishka. Malishka’s husband confuses Lakshmi and Viraj. Viraj tells that he didn’t ask Madhu to give the dress to Malishka. Madhu tells that Malishka came with someone else. Will Rishi and Malishka get caught? Keep reading.

Earlier in the show, Rishi surprises Lakshmi. She gets really happy to see him. He tells that he can see her in front. She tells that even she can see him. She asks him what is he doing in the mall. Madhu tells her that Rishi wants to buy the lahenga she selected. She finds Rishi with the selected dress for her. She gets touched. She tells that she will try the dress and show him. She goes to the changing room.

He worriedly goes to stop her from seeing Malishka. Viraj and Dadu look for Lakshmi. Malishka looks for Rishi. He doesn’t want to fight with Malishka. He enters the changing room to meet Malishka, and finds Lakshmi inside. Lakshmi feels shy seeing him. Rishi apologizes to her. He tells that he will just go out. He sees Malishka and hides inside with Lakshmi.

Rishi covers up Lakshmi without seeing her. Lakshmi gets touched by his gesture. She loves him even more for his decency. He apologizes to her. She tells that its okay. She tries to tie the back string. Rishi asks if he can help her. She permits her. Rishi ties the dress strings to assist her. She thanks Rishi. Malishka gets to hear Lakshmi’s voice and knocks the door to know if she is inside. Rishi asks Lakshmi not to tell Malishka about him, else Malishka will tease him later. Lakshmi tells Malishka that she came to select a bridal dress for her. Malishka gets to see Viraj and Dadu. Rishi says everyone will think wrong about us, don’t tell them that I m here. Viraj is surprised to see Malishka. Lakshmi asks Rishi to hide. She goes to talk to them.

Dadu tells that he will organize the marriage in a grand way. Rishi tells that he got Malishka for shopping. He adds that he will take Lakshmi with him. Viraj thanks Lakshmi for the help. Rishi and Lakshmi leave. Viraj takes Malishka to drop her home. Malishka’s mood spoils because of Viraj and Lakshmi. Neelam takes care of Virender. He gets glad to get her attention. He tells his mum that Neelam deserved a better husband than him. Dadi tells that he is the best husband for Neelam. He feels that he isn’t a good husband for Neelam, he couldn’t keep her happy.

Dadi asks him not to prove himself bad to show Neelam’s goodness. She asks Virender to keep Neelam happy, live for themselves, not just for others. She tells that if he keeps his wife happy, then Rishi will follow his footsteps and keep Lakshmi happy. He agrees. Rishi finds Lakshmi in trouble, when she gets stuck in the jam and can’t cross the road. Rishi runs to her. He holds her hand and brings her to their car. A kinner blesses their jodi. She tells that she can see their true love, nobody can harm their relation until they are together. Lakshmi gets happy to get the blessings. Stay tuned.

Reviewed Rating for Bhagya Lakshmi 16th December 2021 Written Update Tricky Malishka: 3/5 This rating is solely based on the opinion of the writer. You may post your own take on the show in the comment section below.