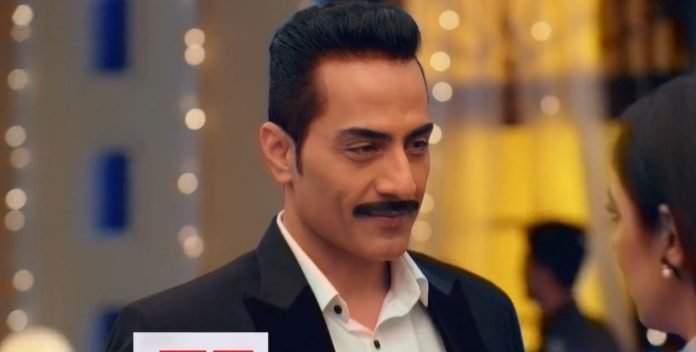 Anupama 16th December 2021 Written Update Vanraj’s new flame Vanraj, Anupama, Kavya and the rest of the family members meet Anuj and his sister Malvika in the new venture launch. Malvika and Vanraj launch their new business venture on their names, Vanika. He declares that its his life’s biggest move. He surprises the family by the big announcement of his new business, which is funded by Malvika Kapadia. Malvika is Vanraj’s new business investor, who believes that Vanraj really has a good potential. Vanraj calls Malvika on the stage. Kavya gets jealous when Malvika calls Vanraj and herself the new business couple in town. Malvika asks everyone to applaud for them. Kavya is really surprised and wonders if Malvika is Vanraj’s new flame, that he suddenly spoke about their divorce.

Malvika gets a warm welcome by Vanraj. She poses with Vanraj. Kavya finds Malvika getting close to Vanraj. Malvika is Anuj’s sister, who was away from him for many years. She knows Anupama, and ignores her. Malvika meets Anuj and GK. Anupama gets confused seeing Anuj showing his love for Malvika. Vanraj and Anupama learn that Malvika is Anuj’s sister. Malvika knows that Anupama is Anuj’s love. She loves Anuj a lot, and gets insecure of losing Anuj to Anupama. She greets Anupama nicely and hugs her. Anuj hopes that Malvika doesn’t create a problem for Anupama.

In this episode, Vanraj will tease Kavya by saying that Baa applies Kaala teeka to him whenever he wears a black suit. He continues telling Kavya that Baa applies Kaala teeka to him to save him from women’s evil eyes. Anuj will feel happy about meeting Malvika after a long time. At a party, Vanraj will ask Anupama if he is looking good. Anupama will tell him that he is looking different. Vanraj will say that he will have to change as his fate is going to change too.

Paritosh informs Anuj that Bapuji and GK have gone to joggers park. He asks Anuj to tell him if needs anything right now. Anuj tells Paritosh that he doesn’t need anything right now and asks him to return home as Kinjal would be waiting for him. Paritosh starts leaving for home saying that he will return in the evening. Anupama stops Paritosh and talks to Baa on call. She informs Baa that she is sending a burger for Pakhi through Paritosh as it’s her burger day. Paritosh leaves, taking Pakhi’s burger from Anupama.

Anupama worries for Anuj seeing him tense. She thinks if she should ask Anuj, what is he so worried about? Anuj thinks he should tell Anupama everything about Malvika. Anupama thinks Anuj will himself tell her if she would have the right to know the thing going on his mind. She serves Anuj a kadha made by her. Anuj tells Anupama that she doesn’t need to work in the kitchen the whole time, even if she is taking care of him. Anupama tells Anuj that she is working in the kitchen as per her own wish/will. Anuj replies to Anupama saying that it isn’t important for women to work the whole time in the kitchen. Anupama says it is also not important that women shouldn’t do any work in the kitchen. Anuj smiles.

Anupama says there is nothing wrong wherever a woman works the whole day but it should be her (woman’s) own decision, where she wants to work and where not. Anupama continues explaining that a woman’s life should work as per her own wish and it’s called feminism. Anuj corrects Anupama’s pronunciation of the word “Feminism”. She doesn’t let Anuj speak anymore and asks him to drink Kadha before it gets cold. Anuj says he can’t drink kadha. Anupama again asks him to drink. Anuj becomes adamant about not drinking kadha. Anupama tells Anuj that he will have to drink the kadha.

Anuj runs away from Anupama and requests her to not force him. Anupama shows anger to Anuj to make him drink kadha. “Khambe Jaisi Khadi Hai” plays in the background. Anupama finally and successfully makes Anuj drink the kadha. Anuj feels bitter taste and Anupama gives him a toffee/chocolate like a kid is given after bitter medicines. He gets happy and takes the chocolate. Anupama’s leg stucks and she almost falls on Anuj. Anuj and Anupama get lost in each other for some time and then return to the present. Anuj thinks to tell Anupama everything about Malvika in everyone’s absence.

He asks Anupama to sit as he wants to talk about something important. Anupama sits. Anuj wonders what would be Anupama’s reaction. Anupama also thinks that she will not be able to have peace till she asks Anuj what is troubling him? She thinks to ask as she has these many rights on Anuj. Someone rings the bell and Anupama goes to open the door. Anupama expression changes on seeing something/someone on the door. Anuj wonders who is on the door? On the other hand, Samar and Nandini are seen practicing in the academy. Nandini feels difficult to handle her hair flicks. Samar requests Nandini to marry him. Nandini asks him what?

Samar tells Nandini the next step after engagement is marriage only. Nandini asks Samar how suddenly he thought of marrying during warm up? Samar gets shy and tells Nandini that now it has become difficult to live without her. Nandini gets shy and asks Samar to go and ask Baa to finalize their marriage date. Samar teases shy Nandini and tells her that he will ask Anupama to talk to Baa after Anuj gets well. He picks up Nandini in his arms and revolves her. Both Samar and Nandini wish that soon Anupama tells them that she also wants to get married to Anuj. They wish this would happen without any problem. Back at Anuj’s home, Vanraj is seen with chocolates.

Anuj jokes to light the atmosphere. Vanraj tells Anuj that he is glad to see him well. Anuj says because of Anupama’s care, the doctor has even finished his home rest. Vanraj says anyone can get fine early, if someone cares for someone with such affinity. Anupama asks Vanraj his actual reason for arriving at Anuj’s home. Vanraj says he came to invite them and GK for a party he kept to surprise everyone. Anuj replies he will surely come with Anupama and GK. Anupama asks Vanraj for what reason he kept this party. Vanraj asks them to understand that his life is going to have a drastic change. He tells them the time for the party. Anuj says that he won’t be able to come as he has some important meeting in the evening. Vanraj asks him to come after the meeting if possible. Anuj agrees.

Anupama says she will surely arrive at the party. At Shah house, Bapuji questions Baa about the party kept by Vanraj. Baa asks Bapuji why he looks so tense? Bapuji tells Baa to understand if something is kept as a big secret, it means either a big happiness is arriving or a big shock is going to hit everyone. Baa asks Bapuji to think good. Bapuji says to Baa that Vanraj has been behaving differently since many days. He says that Vanraj must be hiding something big. Baa says to Bapuji that maybe Vanraj invited them to tell them everything at the party. Bapuji says it will be good for Vanraj to surprise them as he has no ability to handle any more shock.

Vanraj asks Kavya if she won’t apply Kaala teeka to him as Baa applies it to him to save him from evil eyes of women. He leaves promising Kavya that she won’t be able to forget today’s evening. Kavya wonders what Vanraj is going to do in the party. On the other hand, Anuj gets ready in excitement to meet Malvika. Anupama comes and helps him wear his blazer. Anuj gets mesmerized seeing Anupama in black saree. He stares at Anupama and praises her. Anupama gives Anuj his things and medicines too. Anuj asks Anupama to not worry for him and enjoy her party without worrying for him.

Anupama leaves telling Anuj to not forget taking his medicines. Anuj stops Anupama to see her for some more time. He thinks to finally tell Anupama everything about Malvika in the evening after meeting her. Anupama wishes that Anuj gets rid of his tension soon. She wonders if Anuj is tense due to the same girl he was talking to on phone the day before? Malvika is shown getting ready for the party. She slips on the floor and some woman helps her. Anupama sees her. She thinks about how Vanraj threw a party at such an expensive place. Vanraj taps on her shoulder and asks her how he is looking? Anupama tells him that he is looking different. Vanraj says he has to change as his fate is changing too.

GK sees Anuj nervous and excited. He asks him the reason. Anuj tells GK that he is nervous as well excited to meet Malvika after a long time. Shahs too reach Vanraj’s party venue. Shahs wonder how Vanraj kept a party at such an expensive place. Baa asks Bapuji to not worry. Malvika changes her sandals with shoes. She thinks there is more fashion than food in the party. She thinks it’s time to meet Anuj.

In the next episode, Vanraj will be seen introducing Malvika as his new business partner. Kavya will get shocked seeing Vanraj hugging Malvika. Malvika will be seen running towards Anuj. She will hug Anuj and the latter will feel excited and emotional to meet his sister after a long time. Anuj will hug Malvika tightly and revolve her in his arms saying, “My Mukku, My Mukku” shocking everyone.

Reviewed Rating for Anupama 16th December 2021 Written Update Vanraj’s new flame: 5/5 This rating is solely based on the opinion of the writer. You may post your own take on the show in the comment section below.