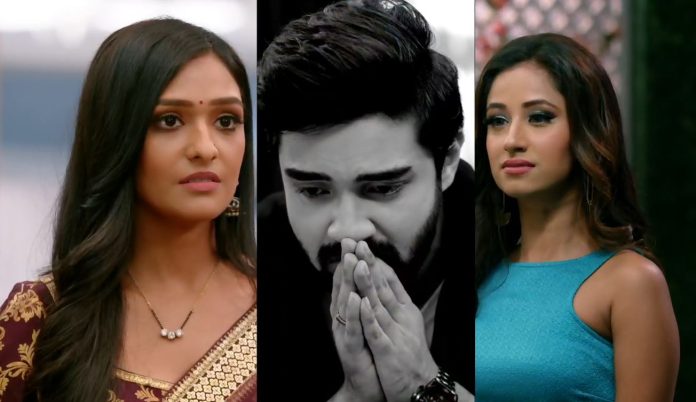 Bhagya Lakshmi 17th December 2021 Written Update Lives at stake Lakshmi and Rishi’s jodi gets blessed by the kinner, that they will be together for seven births. Lakshmi loves Rishi a lot, and trusts him that he also loves her. She tells him that she is very lucky to get his love for seven births instead one birth. Rishi feels so guilty that he is cheating her and doesn’t even entitle true love of one birth. He thinks he shouldn’t lie to Lakshmi further. He decides to go and tell her the truth of Malishka and his love affair. He goes to Lakshmi. Virender meets Malishka and warns her to stay away from Rishi. He tells her that Lakshmi has seen Rishi with Malishka and understood that Malishka is pressurizing Rishi.

He asks Malishka why did she take Rishi along to buy her bridal dress. Malishka can’t tell him about Rishi and her secret marriage plan. Rishi asks Lakshmi to listen to him patiently for a minute. He tells her that she has made a big mistake by marrying him. Lakshmi doesn’t want to hear anything bad like that. She asks Rishi to just leave, else she will scold him. She makes him leave. Virender tells her that her one wrong decision will ruin three lives. He asks Malishka to not break Rishi and Lakshmi’s marriage. What will Malishka do now? Keep reading.

Earlier in the show, Dadi asks Virender not to prove himself bad to show Neelam’s goodness. She asks Virender to keep Neelam happy, live for themselves, not just for others. She tells that if he keeps his wife happy, then Rishi will follow his footsteps and keep Lakshmi happy. He agrees. Rishi finds Lakshmi in trouble, when she gets stuck in the jam and can’t cross the road. Rishi runs to her. He holds her hand and brings her to their car. A kinner blesses their jodi. She tells that she can see their true love, nobody can harm their relation until they are together. Lakshmi gets happy to get the blessings.

Rishi tells that they are getting late now. Lakshmi asks Rishi to give some money to the kinner. Rishi gives the money. Lakshmi asks the kinner to take the money. Kinner refuses to take money and blesses them by all the heart. Lakshmi is very happy to get such a blessing to be with Rishi for many births. She shares her joy with Rishi. She sits in the car. Rishi can’t tell her that he is breaking their relation in this birth itself. Virender asks Dadi to give him some idea to make Neelam happy. He finds it too difficult to please Neelam. Dadi tells that one doesn’t get a good wife easily. He asks her what is her advice.

She advises him to go and ask Rishi. He asks how can he go and ask his son. Ayush comes home. Dadi asks Virender to take an idea from Ayush. Ayush asks Virender what is he doing. Virender tells that his friend’s wife is upset, his friend wants to please his wife. Ayush tells that its not easy to please Neelam. He adds that he is always ready with a solution. He asks Virender to sing a romantic song for Neelam, she loves music. He asks Dadi to come with him, he also needs her help. Virender likes the idea. He thinks of Neelam’s favorite song. He sings and rehearses. Neelam finds him singing and asks the reason.

He tells that its his favorite song. She dislikes to hear it from him. She asks him to have some decency and mind his age. She scolds him and goes. He gets upset. He wants to scold Ayush for the bad idea. Ayush and Dadi find Neelam bashing Virender’s singing. They console Virender. Virender makes Ayush apologize. Ayush and Dadi praise Virender’s singing. Rishi and Lakshmi come home. They tell about finding the bridal dress for Malishka. Rishi tells that Malishka wanted him to help her in shopping. She tells that Malishka was so worried, because there is no woman in her Sasural.

She adds that Malishka was upset, even when Viraj’s Dadu told her that he will handle everything. She tells that Malishka got upset seeing all of them. Rishi tells that Malishka doesn’t get upset for this reason. She tells that she doesn’t say few things, but she surely understands it. Virender doesn’t want Lakshmi to understand much. He wants to save Lakshmi’s marriage, and thinks to talk to Malishka. He tells Dadi that he has to meet someone. Virender asks Rishi to take care of Lakshmi first. Lakshmi repeats the same words to tease Rishi. Rishi is disturbed by the guilt. He can’t lie to Lakshmi further.

He feels Lakshmi deserves to know the truth. He heads to the room to tell Malishka and his truth. Virender summons Malishka outside her house. He asks her what is going on between Rishi and her. She asks him to ask Rishi. He tells that his son will lie to him and then regret for the lie. He adds that Lakshmi is an innocent girl, but not a fool, she understood everything in the mall that Malishka wasn’t happy seeing Viraj and his Dadu. Malishka asks why is he telling this to her. He tells that Rishi just thinks that he loves Malishka, but its not true. He asks her to understand things clearly, Rishi is crazy and Lakshmi is ignorant, but Malishka is marrying Viraj.

He understands that she is pressurizing Rishi this way by emotional blackmail. Rishi reaches Lakshmi. She tells that he says something and does something else. He asks her to listen to him, its really important. He admits that he is really a bad person, he is ruining her life, she made a big mistake by marrying him, she isn’t lucky to marry him, its a curse that she married him. She is stunned. Malishka doesn’t want to tell Virender that Rishi is going to marry her.

Virender knows that he is saying the truth. He tells her that he wants to request her the happiness of Lakshmi and Rishi. He pleads that she won’t play with Rishi’s mind, after all Rishi loves Lakshmi. He asks her not to make Rishi jealous. He adds that her one decision will destroy three lives, she has to make the right decision in her life. He asks her to take advice from her elders. He adds that he thinks the best for her. She thanks him for being so considerate.

She lies that she really wants to marry Viraj, she knows that Rishi won’t come back to her after a year. He wants to believe her. She tells that she wasn’t upset with anyone at the mall. She assures that Lakshmi will be happy, and even she will be happy. She asks him not to tell anything to Rishi about their meeting. He thanks her that she relieved him. He feels Rishi and Lakshmi will never get separated now.

Reviewed Rating for Bhagya Lakshmi 17th December 2021 Written Update Lives at stake: 3/5 This rating is solely based on the opinion of the writer. You may post your own take on the show in the comment section below.