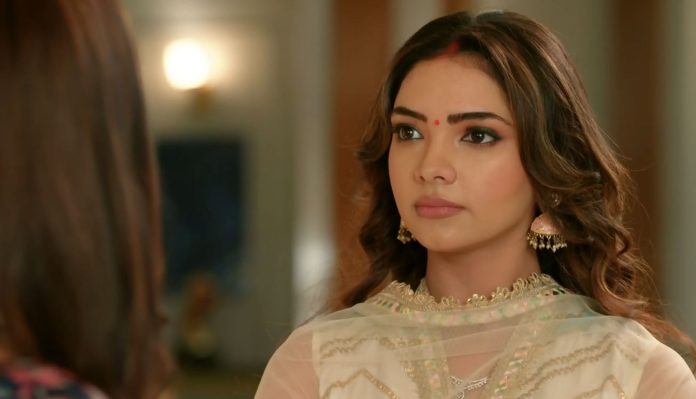 Kumkum Bhagya 17th December 2021 Written Update Rhea warned Prachi angers Rhea deliberately by telling her that Ranbir has hidden the fact from Rhea that he just held her/Prachi tightly in her arms. Rhea looks at Ranbir with much upsetness. Prachi makes Rhea lose her smile and goes away. Rhea tells Ranbir that Prachi is trying to come between them. Ranbir replies that Prachi is just wantedly troubling Rhea, and Rhea is making the former succeed by reacting so immature. He asks Rhea to ignore Prachi.

Rhea goes to Prachi and orders her to leave the house. She expects Prachi to obey her orders. That’s again a foolish move by Rhea. Prachi answers her that she can leave the house if Rhea also leaves at the same time. She tells that she knows the level of happiness Rhea would get on her leaving, and that’s the one thing she can’t let happen. She tells that she won’t go and won’t let Rhea get any moment of happiness. Rhea gets a stern warning. What will Prachi do next? Keep reading.

Earlier in the show, Ranbir and Prachi collide and land into a romantic moment. They recalls their romantic times and also their bitter separation. Prachi doesn’t want to recollect their good moments. She just wants to remember his betrayal. She remembers his challenge. Rhea asks Ranbir to come and have the sweetdish. She tells about the new bahu’s ritual of making sweets, it brings sweetness in relations. Ranbir tells that there is another ritual in the house, they all dine together. Prachi thanks him for the invite. Rhea gets upset.

Prachi angers Rhea by telling her about Ranbir and her romantic moment. Prachi thanks Ranbir and goes. Rhea fights with Ranbir. Ranbir tells that Prachi was falling down, he just helped her. She asks him not to stoop to Prachi’s level. He asks Rhea not to fight him, else she will just help Prachi this way. Aaliya calls Rhea. Rhea tells her that her life has changed completely. Aaliya tells her that she works for a company, she had gone for a foreign trip, but she is back in the city now. She asks her what does she mean by her message. Rhea tells that Prachi is back, there is much drama in her life. She tells what Prachi did to snatch Ranbir from her. She feels she is going to lose everything. Aaliya asks her not to worry, she is coming there to handle things. Rhea doesn’t want to lose to Prachi.

Pallavi praises the sweets. Rhea offers it to Prachi, but the latter refuses to have it. Rhea asks Ranbir to have the sweets by her hand, it will look more tasty. Ranbir also dislikes it, as Dida. Rhea asks Pallavi why is Ranbir behaving so. She also tastes the sweets. She is shocked to have it. Ranbir tells that its too sugary. Pallavi tells that they should appreciate Rhea’s efforts. Prachi jokes on Rhea’s sugary touch. Pallavi asks Ranbir to scold Prachi. Prachi asks Pallavi not to get fights between a husband and a wife.

She calls it unfair. She asks Ranbir not to spoil his mood, and have food at the office. She shows her rights on Ranbir. She feeds the curd and sugar to him for his important meeting. Ranbir doesn’t understand if she has come for her revenge or her rights on him. He gets confused by her behavior. Prachi asks him to leave for office. Rhea yells at him. Ranbir asks Rhea not to get troubled. Rhea asks him if he isn’t troubled, is he liking whatever Prachi is going. Ranbir doesn’t answer and goes.

Rhea stops Prachi and warns her to stay away from her husband Ranbir. Prachi tells Rhea that she has to go for shopping. She asks Rhea not to waste her time. Rhea asks her to leave the house. They both have a heated argument. Rhea asks Prachi to die, why is she alive, like she has a reason to live. Prachi has the baby as a reason for her life. She tells Rhea that she will not give her a chance to stay happy now. She adds that she loved Rhea a lot before, she was blinded, and now she has seen the truth. She reveals that she had seen Rhea’s bad sight on Ranbir, and realized Rhea’s plans as well, but didn’t pay attention because of the trust. She tells that they have no relation between them now, she will settle their scores.

Rhea tells that Ranbir has married her by his wish, Prachi has already lost her husband, its no use to fight for him. She challenges that she will throw out Prachi in two days. Prachi asks when will she win if she wastes her life in these things. Ranbir meets his old friend Jay after a long time. Jay thanks him for being so nice to his brother Shiv. Ranbir asks Jay to become his personal manager until Shiv resumes. He updates about his meeting. Jay tells that he will read the files until they reach the hotel. Prachi goes for the checkup at the hospital. She gets to hear the baby’s heartbeat. She cries that Ranbir isn’t with her, the baby is also alone like her. She doesn’t want Ranbir to be with her, but with their baby.

Reviewed Rating for Kumkum Bhagya 17th December 2021 Written Update Rhea warned: 3/5 This rating is solely based on the opinion of the writer. You may post your own take on the show in the comment section below.