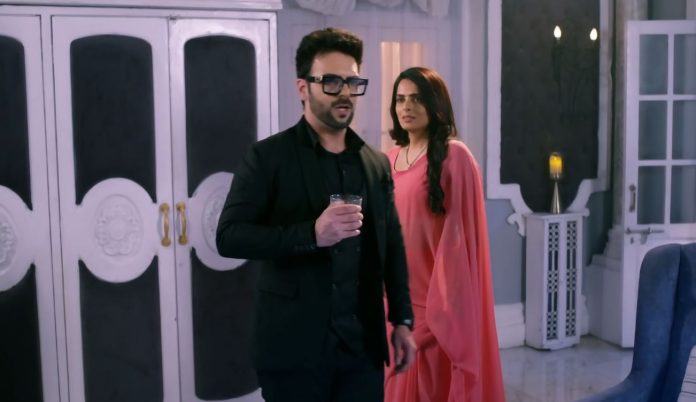 Kundali Bhagya 20th December 2021 Written Update Natasha entry Sherlyn fakes a good bahu avatar in front of Rakhi. She tells Rakhi that Preeta has done wrong with them by snatching Pihu, which led to Mahesh’s mental instability. She tells that Preeta will never come back to them, knowing she is wrong and not able to face them. She asks Rakhi not to wait for Preeta, who is a bad time for them. She asks Rakhi to be thankful that their bad time has passed. She tells that Prithvi is handling the business since Karan was in depression, its also because of Preeta. She accuses Preeta for their miseries. She asks Rakhi to get Karan remarried. She takes the responsibility of finding a girl for Karan.

Preeta overhears their conversation and is enraged. Sherlyn has brought Prithvi back in the Luthra family, after fulfilling revenge on Preeta. Sherlyn and Prithvi fake a fight in front of the Luthras to convince them that they aren’t together, but they are still together in their evil plans. Sherlyn tells Prithvi that Mahesh might die by his torture, and then he will lose the entire property to Luthras again. Prithvi tells that he will keep Mahesh alive as long as he wants, and he has a back up plan as well to get the Luthra property.

He tells her that she will get 50% percent of the property which is on Rishabh’s name, since she is Mrs. Rishabh Luthra. She asks about Karan’s share, if Preeta will come back and claim it. He asks her to get Karan remarried to the girl they plant for the property purpose. He tells his plan that she will plant her fake sister Natasha in Karan’s life. He tells that Natasha will get the 50% property after marrying Karan. He asks her to tell Natasha to meet Karan and try to get close to his heart, just to convince him for marriage.

He tells that once Karan marries Natasha, then Sherlyn and he/Prithvi will get all the 100% of the Luthra family property. Preeta will get back to the family to claim her rights as Karan’s wife, and pose a huge problem to Sherlyn and Prithvi. Who is Natasha? Will Karan agree to marry Natasha or will Preeta hinder her in time? Keep reading.

Earlier in the show, Prithvi tells that if Mahesh dies, then Karan and Rishabh will get the property back, that’s why he will keep Mahesh alive and keep the authority in his hands. He knows that Karan loves Mahesh and wants him alive. He also wants Mahesh to stay alive. He asks the family to explain Karan his limits. Preeta cries watching the Luthras in much pain. Prithvi stops Kritika and reminds her that he is her husband. He doesn’t forgive her for the big cheat that she supported Preeta against him.

Rakhi begs Karan to not fight Prithvi. She tells that Prithvi may stop Mahesh’s treatment if Karan rebels. She asks him to find Rishabh and get him back, only Rishabh can save them from Prithvi. Kareena tells that Rishabh had handled the business till now, just he can save them. She also asks him to find Rishabh. She asks Karan to control his anger and not let Prithvi use him. Karan takes their advice. Rakhi asks Bani and Kareena to take some rest. Preeta cries seeing Rakhi cry. She wishes she could help them. Rakhi misses Rishabh and Preeta in the family.

Sherlyn tells Rakhi that Preeta will never come back in the family, she is a bad news for them. Sherlyn tells that very soon Prithvi will also leave from their lives. Rakhi hugs her and cries. Preeta leaves from there and thinks of the Luthras’ misery. She wonders how did Prithvi become the owner of the house. She thinks where did Rishabh go, how did Prithvi take over everything. Shrishti saves Preeta from getting hit by a car. She finds Preeta lost and takes her home. Prithvi takes Sherlyn to his room. She asks him not to drag her this way, anybody can see them.

He tells her that she is acting good as the perfect bahu. They laugh. She asks him not to provoke Karan, who can do anything against them. He tells that he loses his temper when he sees Karan. She warns him to control his rage. He tells that he knows it very well, its all his plans, he will control Luthras, Kareena sent him to Mahesh to get the papers signed, and that day he took advantage of Mahesh’s trust on him, he got the authority papers signed by Mahesh and got all the powers in his hands.

She asks him if Mahesh dies then what will happen. Prithvi tells that Mahesh will be alive, its important, his post is valid until Mahesh is alive, he will be mad because of the electric shocks and drugs. He tells Sherlyn that Luthra mansion will be just of him. Sherlyn tells that he is being overconfident. He tells that he has a plan to snatch 50% of the Luthra family, even if Mahesh dies, they will get Rishabh’s share and then Natasha will get 50% share that comes after she marries Karan. He asks Sherlyn to tell Natasha to get close to Karan soon, because they have less time. He doesn’t want Karan to see Preeta as he has seen today. Natasha is busy making the dance videos.

Sherlyn meets Natasha and learns about her dance videos and followers count. She asks Natasha not to worry about the less followers. Natasha boasts of her skills and cuteness. She finds herself a dance superstar. Sherlyn asks her to run after Karan and follow him, she will get mcuh money once she marries Karan. She asks her to get close to Karan, who is in depression. She takes Natasha to Karan. Sarla thanks Biji for staying with Preeta for two years and taking care of her. Preeta and Shrishti come home.

Preeta is much upset. She lies to the family. She tells that she got tired because of work. Sarla knows Preeta’s real sorrow. She tells that its not easy for Preeta to stay in this city. Biji asks Sarla to give some time to Preeta. Sarla wishes that things get fine. Sherlyn finds Karan drinking. She asks Natasha to get Karan’s attention. Natasha asks Sherlyn to leave them alone. Natasha asks Karan is he stressed. She acts like a good friend to him. She tries to woo him.

She tells Sherlyn that no girl will enter Karan’s life now. Sherlyn wonders if Natasha can make her place in Karan’s life. Preeta misses Rakhi and recalls her words. Rakhi also misses Preeta. She wants to visit Preeta once and find out if she is okay. She doesn’t want to meet Preeta after recalling the past. Preeta recalls the Luthras blaming her and rebuking her with hatred. She cries after the bad nightmare. Shrishti gets scared seeing Preeta’s tears and shouts to call Sarla.

Reviewed Rating for Kundali Bhagya 20th December 2021 Written Update Natasha entry: 3/5 This rating is solely based on the opinion of the writer. You may post your own take on the show in the comment section below.