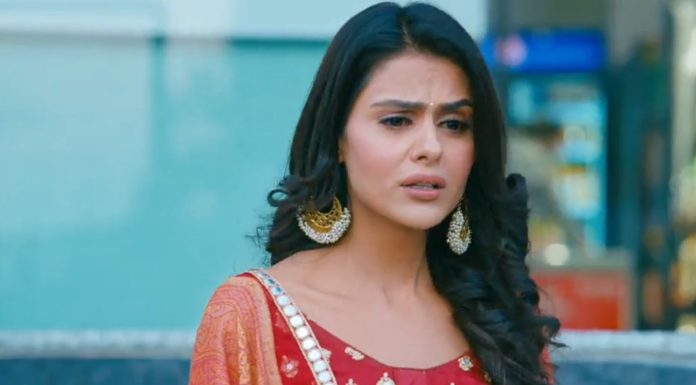 Udaariyaan 20th December 2021 Written Update Troubles for Tejo Angad looks for Riya desperately. Tejo is upset that Angad sends her home in anger. Tejo is responsible towards Riya. She had been taking care of Riya well, but didn’t know that danger will hover around in the form of an unknown enemy, Jasmin. Tejo isn’t at fault, because she has fallen prey to Jasmin’s evil conspiracy. Angad fails to find Riya. He returns home empty-handed in a hopeless and raged state. Tejo enquires about Riya. Angad lectures her when she teaches him about child’s safety. He asks her how can she teach him about Riya’s safety when she is responsible for Riya’s disappearance. He tells that Riya has got kidnapped when Tejo was present there.

Tejo asks him where is he going now. He asks her to leave him alone. He rebukes Tejo. This sight pleases Jasmin, who stays outside the house and keeps an eye on Tejo’s plight. She tells that Tejo will be soon ousted from Angad’s life, she can enjoy a luxurious life in the lavish house for some more time until Angad throws her out. She tells that Tejo shouldn’t even get a place roadside. She wants to see Tejo in the worst imaginable state, due to her immense hatred. How will Angad find Riya? Will Jasmin release Riya after proving Tejo irresponsible? Keep reading.

Earlier in the show, Tejo calls Angad and informs him how she lost Riya. Angad is in shock. She informs him that she got Riya to the supermarket, but the latter is nowhere. Angad asks her not to worry, he is coming. He runs out of his office to reach Tejo and find Riya. Angad tells that he will not let anything happen to Riya. He suspects if Riya’s Nani took her away. He thinks Tejo made a wrong move by taking Riya outside and putting her into risk. Jasmin lies to Riya and takes her too far. Riya thinks its a surprise from Angad. Tejo and Angad look for Riya everywhere, but fail to find her. Angad angrily sends Tejo home. He doesn’t want to hear anything from her. Jasmin succeeds in creating a rift between them. Stay tuned.

Tejo comes home and tries to find Riya. Her happiness gets back when she really finds Riya at home. Riya hugs her. Tejo is hugely relieved to see her. She asks Riya where had she been till now. Riya tells her that it was Angad’s prank, he had sent his friend to pick her and then drop her home. Tejo doesn’t believe this, because she had informed Angad about Riya and he went to search for Riya. She asks Riya about Angad’s friend. Riya describes Jasmin, who looked stunningly beautiful.

Tejo doesn’t even think of Jasmin, since the latter is assumed to be happy in Canada. She wonders who is behind the prank. She asks Riya why did she go with a stranger. Riya tells that Jasmin had her doll, so she believed her. Tejo gets puzzled. Angad is still madly searching for Riya. Tejo informs him that Riya has come back home. He gets a big relief by this good news. She asks about the prank. He doesn’t understand anything. He tells her that he will come home and talk to her. She waits for Angad home. Jasmin wants to trouble Tejo in the similar way again, and make her lose Angad’s faith.

On the other side, Fateh gets troubled by Tanya, who continues to flirt with him in Sharma’s absence. He refuses to her. She vents anger on him when he pushes her away. Sharma is unaware of her truth. She threatens Fateh of lying and framing him in the indecent act. Fateh is speechless and doesn’t say anything to Sharma. Tanya troubles Fateh a lot. He thinks Sharma is a nice person, but Tanya isn’t deserving of such a husband. Fateh tries to stay away from Tanya. Angad returns home and hugs Riya.

He sends Riya away to talk to Tejo in private. She tells Tejo about her big mistake of losing Riya. Angad blasts his anger on Tejo who had been too careless and lost Riya. Tejo tells him about someone’s conspiracy. He doesn’t listen to her excuses and rebukes her. He doesn’t want to talk to her about anything. She asks him to talk at least for Riya’s safety. He yells at her for lecturing him on a child’s safety when she couldn’t look after Riya well. Tejo fails to understand his dual personality. She asks him what’s his truth, when he can turn too good and take away her sorrow and pain, then why does he not tell her look into his life, why does he always want to keep her away from Riya’s matter.

She questions his strange behavior. Angad asks her to just leave. She insists him to tell her what is he hiding. He tells that if Riya’s Nani gets this news, then she will come with the court orders and take Riya away. Tejo asks him why would she separate Riya from her uncle. Angad admits the dark truth that he has killed his brother and Bhabhi, he is the reason for their accident, their death. He blames himself and tells Tejo that he has no right on Riya. Angad breaks down, while Tejo consoles him.

She asks him what does he mean that he killed Riya’s parents. He tells her that he dies by guilt every day that he has orphaned Riya by becoming the reason for her parents’ death in the accident, which could have been avoided if he got the car checked before her parents went on the trip. He tells Tejo that he didn’t take his brother’s words seriously, and that led to the big accident where his brother and his Bhabhi died. He cries and tells Tejo that they were his world and he was really happy to live with them, but now he feels guilty that one day Riya will also know the truth that he is their murderer and will leave him to go far away.

He cries that Riya’s Nani will fill her mind with the painful truth and then snatch Riya from him. He adds that he can’t live without Riya, his soul gets shaken up with the thought of losing Riya. Tejo understands his pain and asks him not to blame himself for the accident. She promises to support him in Riya’s legal matter. She tells him that he isn’t alone from now. Angad leaves in anger, while Tejo is disturbed thinking about the girl who kidnapped Riya and then dropped her home. She wonders what’s the girl’s intentions behind such a move. Jasmin sees Angad leaving in anger, and thinks her plan has got into action.

She plans to take the next step now and snatch Riya from Angad, so that Tejo gets blamed. Tejo enquires from Babli about Jasmin. She learns that Jasmin had come home and fooled Babli. She fails to realize that it was Jasmin who plotted this to ruin her peace. Tejo decides to dig into the matter. Will Jasmin get caught? Stay tuned.

Reviewed Rating for Udaariyaan 20th December 2021 Written Update Troubles for Tejo: 3/5 This rating is solely based on the opinion of the writer. You may post your own take on the show in the comment section below.