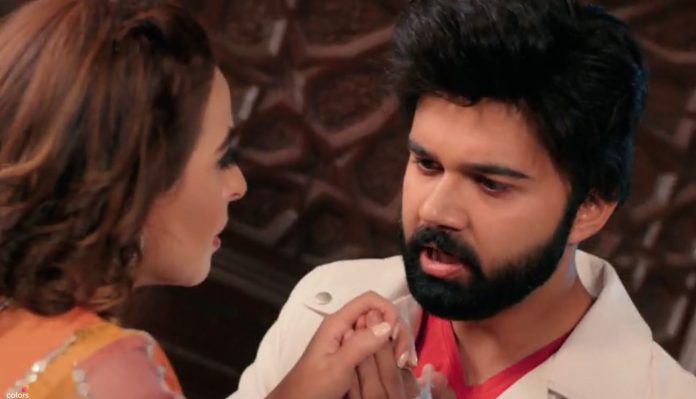 Sasural Simar Ka 21st December 2021 Written Update Chitra’s entry Aarav sees Mohit and doesn’t identify him, because he is drunk. He asks Mohit is he drunk. Simar calls Aarav. Mohit’s man drops Aarav’s phone and stops him from taking Simar’s call. Aarav goes to his car. He asks for his phone. Simar tells Samar that Aarav isn’t answering her calls. Samar asks her to call him later. Chitra steps on Aarav’s phone and stops him. Aarav isn’t able to see things clearly and understand anything. He tells that he can see Chitra. He asks her if she is really there. Chitra tells that its really her. She asks him what happened to him.

He tells that everything went wrong, Simar is snatched from him. She asks him to sit in the car and leave from the isolated road. Chitra informs Giriraj that they are leaving, they will pick him on the way. She leaves Aarav’s phone there. Simar calls Aarav again. Mohit answers the call. She tells that she wants to meet him to discuss something important. He disconnects the call. He messages her and asks her to meet him alone at the sent address. Samar asks why did he call her alone. Samar doesn’t want her to go alone. He tells that he will come along. She tells that she will talk to Aarav first and sort their issues, she will get Aarav to meet Samar.

She asks Samar to let her go. He tells that he will at least drop her there. Aarav gets more drunk that Simar has left him, she isn’t in his life now. Chitra acts to console him. Samar gets a call, while Simar waits in his car. Chitra takes Aarav from the same route. Simar and Aarav fail to see each other. Aarav shouts Simar. Samar drives the car. Aarav laughs and tells that he sees Simar everywhere. Mohit waits for Simar at the godown. He plans revenge on Simar. He thinks to make Simar pay a price. Yamini asks Jogi about Aarav. Jogi tells tat Aarav has reached home. She gets relieved. She wants Aarav’s safety. She doesn’t want Gitanjali to ruin Aarav’s life.

Badimaa rebukes Sandhya for hiding secrets from her. She doesn’t believe Sandhya. She tells that she can see a bad future of the family. Sandhya apologizes to her. Chitra drops Aarav home in the drunk state. Aarav comes home drunk and drops the alcohol bottle. Giriraj and Chitra bring him home. They show that they have saved Aarav and brought him safely. They plan their entry back in the family. Aarav blames the family for snatching his Simar. Aarav falls down. His parents rush to him with concern.

Badimaa asks Chitra what did she do to Aarav. She reminds the warning. She asks Chitra to stay away from the family. She can’t forget that Chitra tried to harm Aarav. Giriraj tells that its just a misunderstanding. He calls Badimaa wrong. Chitra apologizes to Badimaa. She wants her lost place back. Vivaan and Reema are shocked to see Chitra and Giriraj at the door. Vivaan rushes to see Aarav. Badimaa asks Chitra not to enter the house. She asks where did they get Aarav. Giriraj tells that they found Aarav fallen on the road, a truck was going to run over him, they had saved Aarav’s life and came to drop him home.

He praises Chitra who stood between the truck and Aarav, she was the one who stopped the truck by risking her life. Badimaa tells them that the story is good, she doesn’t trust him and his wife now. She tells that she will ask Aarav the truth once he gets sober. Aarav falls down when the family tries to take him to the room. Badimaa asks them to leave Aarav alone. She encourages Aarav to get up on his own. She helps him stand up on his feet. She asks him to tell the truth, what happened with him, who saved his life. Aarav doesn’t answer them. He is heartbroken because of Badimaa and his parents.

Aarav tells he has much pain in his heart, the pain is given to him by his so called family. He tells that there is no reason or hope for him to live, its better that he dies. He hates the family. He tells that he doesn’t want to live with them, they are his enemies now. Badimaa and the family are hurt by his words. He wants to leave his house and go away.

Reviewed Rating for Sasural Simar Ka 21st December 2021 Written Update Chitra’s entry: 3/5 This rating is solely based on the opinion of the writer. You may post your own take on the show in the comment section below.