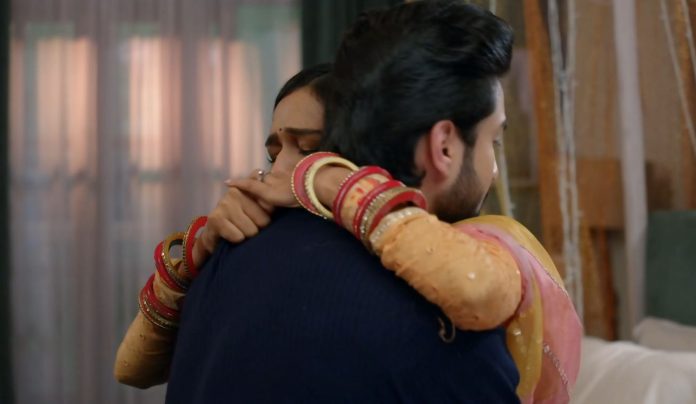 Bhagya Lakshmi 23rd December 2021 Written Update Lakshmi breaks down Malishka tells that Lakshmi has become her Sautan. She gets too angered on Lakshmi, that she wants the latter to come in her wedding and see it herself. She tells that she wants Lakshmi to come and see the wedding, without Rishi inviting her. Rishi takes care of Lakshmi. He apologizes for hurting her. She asks him to think what will happen if she gets hurt big time, like he is feeling so worried for a small thing. She tells that big wounds don’t heal so soon. Rishi gets worried hearing her words and feels guilty of cheating her. She grows emotional and hugs Rishi, asking him not to leave her ever, else she can’t live without him. He consoles her.

He sees the time and tells Lakshmi that he has to rush. He has to go to Malishka’s place and marry her. Malishka tells that Oberois will have no option than to accept her as their Bahu, and poor Lakshmi will leave Rishi on her own after witnessing the marriage. Rishi tells Lakshmi that he is getting late. He goes away and leaves Lakshmi worried. Malishka wishes herself happily that her wedding day has arrived. Will Rishi break Lakshmi’s heart and faith, and marry Malishka? Keep reading.

Earlier in the show, Lakshmi confronts Rishi about the wedding card. Rishi calls it a printing mistake. He tells that he wanted to help Malishka, he gave the wedding cards order, this sample got an error. He adds that he forgot to give Viraj’s name, so that guy had put his name on the sample card. He asks Lakshmi what did she think that he will marry Malishka. She tells that she really thought so.

She asks how can the man make such a big mistake. He tells that he scolded the man a lot. She starts coughing by cold. She then realizes his wet clothes and sends him to change his clothes. Rishi was worried that his lie will get caught. He tells that Malishka will turn him mad one day. Malishka sees the dress gifted by Dadi. She throws the shagun. She tells that she will be marrying Rishi. She loves him a lot. She boasts of her cleverness that she is making Rishi fulfill her demands. Rishi finds Lakshmi crying. He asks the matter. He asks who has hurt her now. She hugs him and shares her fears of losing him.

Rishi hugs Lakshmi when she sobs a lot. She tells him that she was afraid of losing him, then she understood his importance in her life, he is her identity, the reason for her living, she is nothing without him. He asks her not to think much. He consoles her. He tells her that they are different, their identities are different, she shouldn’t love him so much, her existence shouldn’t depend on anyone else, she should feel complete and stay happy. He hints that maybe they won’t stay together forever. She asks him does he not want to stay with her. He recalls their moments. The stormy winds begin with the rains.

She rushes to close the window, and gets herself drenched. She wipes her hair. Rishi looks at her. She apologizes to him. He pacifies her fears and makes her happy. The power failure makes them fall into a moment. They slip and fall into a romantic moment. They smile seeing each other. Malishka is preparing for her marriage. She tells the wedding planner that there are no guests, that the groom, bride, pandit and a Sautan will be there. She gets upset recalling Lakshmi. She wants Lakshmi to come and see the wedding, and then know the truth herself. She wants the family to accept her. She hates the fact that Rishi’s life is in danger. She thinks to stop Lakshmi back just to save Rishi.

They share a laugh. He takes care of her. He tells that he had hurt her. She tells that he can never hurt her, it was because of her mistake. She adds that her wounds don’t heal easily, big wounds don’t heal soon and leave a scar. Rishi thinks he is at fault to do wrong with her, he got close to her and made her fall for him, and now he is going to leave her. He thinks he is really bad. He tells her that she is really good, and he isn’t worth her. He adds that she may not forgive him for his mistakes, but she must always take care of herself. She tells that he is always with her to take care of her.

She isn’t scared of anything. He does the aid. He tells that she doesn’t care of herself, that angers him. He reminds that she always risks her life to save others. She tells that she isn’t delicate, she can tolerate anything, but not his annoyance. She asks him to scold her, but not stay silent, she feels distant by his silence, she can’t stay without him if he goes away. She doesn’t have words to express her feelings. She tells that she exists because of him. She madly loves him. Rishi asks her to go to sleep. She holds his hand. He goes away. Malishka likes the wedding decorations.

She is not tensed. She is going to marry Rishi. She gets dreaming of him. She messages I love you to him. She can’t wait for the next morning. Rishi sees Lakshmi sleeping. He responds to Malishka’s message but then deletes the reply. He falls into a big dilemma on recalling Lakshmi’s words of faith. He goes to sleep. Lakshmi dreams of a happy union with Rishi. Malishka comes and breaks them apart, to take Rishi with her. Lakshmi wakes up from this nightmare. She cries and hugs Rishi, when he attends her to pacify. She asks him to never leave her. Stay tuned.

Reviewed Rating for Bhagya Lakshmi 23rd December 2021 Written Update Lakshmi breaks down: 3/5 This rating is solely based on the opinion of the writer. You may post your own take on the show in the comment section below.