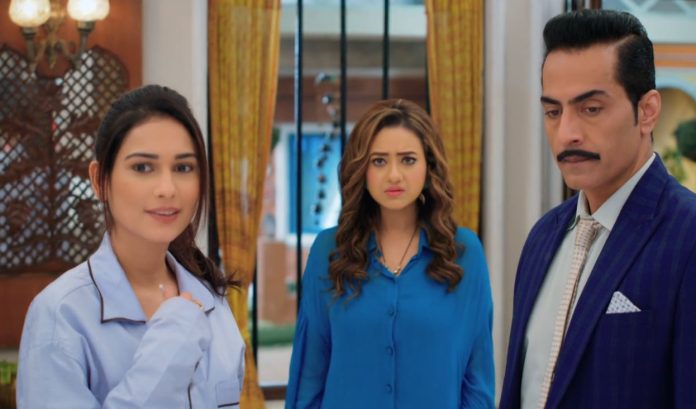 Anupama 24th December 2021 Written Update Malvika’s twist Anupama and Anuj are seen searching for Malvika through a car. She asks Anuj if Malvika feels bad even through little things? Anuj says old wounds hurt more. He tells Anupama that Malvika has been sensitive since childhood. Anuj stops speaking about what happened after that. He changes his words and says Malvika doesn’t know how to hide things and speaks everything that is inside her heart. Anuj says Malvika felt hurt once again. Anupama asks Anuj to not blame himself.

Anuj asks Anupama, who is to be blamed then? He tells Anupama that he failed to give Malvika any time as he got very busy at work after his parents death. Anuj says Malvika just wanted his attention. Anupama says to Anuj that she understood that Makvika needed his full attention for herself alone. Anuj says he and Malvika are those broken pieces who can be completed only after getting together. Anupama says he and Malvika both suffered pain and sadness. She says to Anuj that the only difference between him and Malvika is that he knows how to handle sorrows.

Anuj says to Anupama that no one can handle the pain or sadness Malvika suffered from. He tells Anupama that she can’t even think how alone Malvika is? At shah house, Vanraj thinks his new work is going to start from today. He prays to Lord and says, “Jai Mahakaal”. Kavya comes there, Vanraj says he has to leave at 11 am. Kavya gives Vanraj his handkerchief and some other stuff. Vanraj tells Kavya that he wouldn’t have left Anupama if he needed a wife like her. He asks Kavya to not waste time trying to be like old Anupama. Kavya feels frustrated and asks Vanraj what type of wife he wants? She says she will become exactly like he wants his wife to be.

Vanraj asks Kavya to sign the divorce papers and let him live in peace. He asks Kavya if she can sign the divorce papers. Kavya tells Vanraj that she doesn’t want to be a woman who leaves her house and self respect for love/husband. She says she is trying to forget her self respect because her heart only understands own and alien. She tells Vanraj that she won’t ever let him become extrinsic. Vanraj leaves wishing Kavya “Goodluck”. On the other hand, Anuj tells Anupama that everyone’s way of saving himself/herself from pain is different. Anuj says Malvika is running away from her pain and he is trying to hide from his pain.

Baa asks Kavya if she is well? Kavya reminds Baa that she only asked to work on her marriage. Baa tells Kavya that for being a good wife she doesn’t need to stand in the kitchen the whole day. Frustrated, Kavya asks Baa what should she do, leave kitchen work? Baa leaves, asking Kavya to continue her work. Kavya fears becoming old Anupama. She thinks that Kavya is Vanraj’s love and Anupama is Vanraj’s need. She decides to become the perfect combination of both Kavya and Anupama. Anupama prays to God to help Anuj find Malvika. Malvika is seen wandering here and there on the streets. She scolds a person for staring at her.

Anupama gets shocked to hear this. She asks Rinku, didn’t she try to talk to her parents or family? Rinku tells Anupama that there is no culture of understanding in her hometown and people are just forced to marry. She reveals that she ran 21 times till now. Anupama explains to Rinku that she will keep running away from her like this. She jokes with Rinku. Rinku takes Anupama’s leave. On the other side, Kavya runs behind Vanraj to give him tiffin. Vanraj tells Kavya that their whole day will go in food tasting. Kavya asks whom else?

Vanraj turns and gets shocked to see Malvika shaking at Shah house door. Kavya too sees Malvika and recalls herself shaking at Shah house door in the past. Vanraj asks Malvika what happened? Malvika tells Vanraj that she forgot money and cards at home only. She requests Vanraj for an immediate sugar shot (cold drink). Vanraj and Kavya both get shocked and confused with Malvika’s behavior. On the other hand, Anuj and Anupama are seen continuously searching for Malvika. At Shah house, the whole family is shocked to see Malvika drinking cold drinks with speed. Malvika’s sudden burp makes Bapuji and Pakhi laugh silently.

Malvika apologizes for coming suddenly and asking for a cold drink. She tells Baa that she was feeling salty. Pakhi explains to Baa that Malvika is in a bad mood. Bapuji asks Malvika if she and Vanraj have to start work from today onwards? Malvika says yes. Kavya asks her if she will work in a night suit. Malvika replies that she has to do business, not her clothes. Baa jokes with Malvika. Malvika asks Baa to permit her to stay at Shah house. This request of Malvika shocks the whole Shah family. Malvika says she will pay the rent and can adjust anywhere.

Whole Shah family feels weird with Malvika’s behavior and requests. Malvika asks Vanraj if she can stay at his house? On the other side, Anuj and Anupama are seen searching for Malvika. Anupama asks Anuj about Akshay. She says she heard it by mistake. Anuj tells Anupama that Akshay was Malvika’s boyfriend. He reveals that he went very busy at work and Malvika found Akshay as her support in his absence. Anuj says that he found that Akshay was behind Malvika’s wealth, not love. Malvika tries to convince Vanraj to let her stay at his house. Kavya feels angry when Malvika reveals that she got impressed by Vanraj’s words and business ideas while conversing online with him from Paris.

Malvika tells Vanraj that it’s due to him only that she got the courage to return to India and meet her family after a long time. In excitement, Malvika hugs Vanraj, shocking everyone. Baa coughs and sings Malvika to stay away from Vanraj. Mamaji explains to Malvika that it’s not in their culture. Malvika continuously requests Vanraj to let her stay. On the other hand, Anuj reveals to Anupama that Akshay ran away and left Malvika when he offered him the money to test him for his sister’s happiness. Anupama understands that Malvika misunderstood Anuj in the past. Anun says Malvika went silent on knowing the truth.

Anuj further reveals that he can’t forget Malvika’s words. He starts telling Anupama that Malvika already knew that Akshay was behind her wealth. Anuj says that Malvika explained to him that loving someone is to accept his/her partner’s each weakness too. He says that Malvika told him that she accepted Akshay as he was. Anuj blames himself saying that he believed that a person’s heart should be seen in love not wealth. He says he did what he found was right in the past. Anuj says after Akshay, Malvika went far away from him.

He stops revealing what happened after that to Anupama and also apologizes to her for it. Anupama cries saying she also won’t be to question Anuj more. She thinks about how she will be able to help Anuj without knowing everything about his past. Anupama says she can’t see Anuj’s pain. In the next episode, Vanraj will allow/permit Malvika to stay at Shah house. Angry Kavya will ask Malvika to get out of her house. Anuj will hear this, shout Kavya’s name and stare at her angrily. He will get shocked to see Malvika holding Vanraj’s hand and saying that she will stay with her partner Vanraj. Malvika will hug and thank Anupama for permitting her to stay at Shah house.

Reviewed Rating for Anupama 24th December 2021 Written Update Malvika’s twist: 5/5 This rating is solely based on the opinion of the writer. You may post your own take on the show in the comment section below.