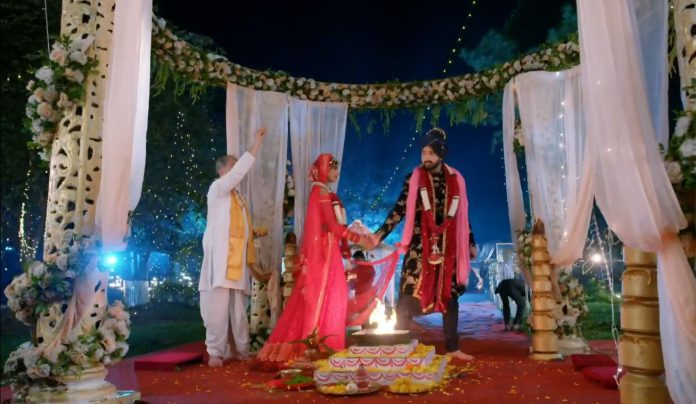 Bhagya Lakshmi 27th December 2021 Written Update Rishi marries Malishka Neelam tells that her son Rishi can never go against her. Virender asks what if Rishi goes against her, what will she do. He grows worried for Lakshmi. Lakshmi senses a bad omen when a glass vase breaks by her hands. She grows worried recalling the nightmare. She wonders how did Rishi think of leaving her if she is really important for him. Malishka tells that she will marry Rishi some how. Neelam, Lakshmi and Virender along with the other family members are shocked to know the danger over Rishi’s life. Neelam asks Pandit to guide them to save Rishi. Pandit tells that it will happen as destined. Neelam tells that Lakshmi will be responsible if anything happens to Rishi.

Lakshmi promises Neelam that she will bring Rishi home safely. She walks on the road on her hurt foot and looks for Rishi madly. She realizes that he was going to meet Malishka at her house for some work. She heads to Malishka’s house. Rishi meets Malishka and they both get ready to get married. Pandit chants the mantras, while Malishka happily performs the rituals to marry Rishi. They take the wedding rounds, when Lakshmi arrives there and receives a huge shock by Rishi’s deceive. Will the wedding stop? Keep reading.

Earlier in the show, Rishi asks Lakshmi to take care of herself. She tells him that she will be tensed until he comes home. He asks her to rest instead worrying. She smiles seeing his care. Karishma and Dadi learn that Neelam is worried. They go to see Neelam. Lakshmi arrives home. She asks the servant not to tell anyone about her injury. He informs about pandit’s arrival. He tells that the entire family is worried. Lakshmi runs to know the matter. Rishi meets Malishka at her home. She tells that she will wear a saree on her wedding. He tells that Lakshmi wears sarees. She asks him not to take Lakshmi’s name. Lakshmi fears for Rishi’s life.

Rishi apologizes to Malishka. He tells her that he just loves her. She tells that she will try the saree and come. He waits for her. He tries to sehra. He thinks of Lakshmi. The wind blows and makes him tensed, just like Lakshmi. He removes the sehra. Servant asks Lakshmi to go aside, while he cleans the broken case. Lakshmi recalls the nightmare. Rishi sees the lipstick marks on his shirt. He thinks of Lakshmi’s hug. He feels guilty. Malishka gets dressed up in the saree. She tells that she is looking really stupid, because the saree isn’t tied well. He tells that the saree looks fine. She asks him to take help from Lakshmi. Rishi asks her not to involve Lakshmi in their matter. He gets upset on her stupid pranks.

He tells her that he is breaking Lakshmi’s heart, he is a selfish person that he is marrying Malishka and doing injustice with Lakshmi. He tells that even Malishka is selfish to not think of Lakshmi. He cries that they all are using Lakshmi for their motives, they are really bad and selfish, Lakshmi isn’t bad, they are bad to use her. He asks Malishka to never say bad about Lakshmi, because it hurts him a lot. He wants Malishka to understand Lakshmi’s pain. He feels he was wrong to expect this from Malishka.

He tells that when a person’s love dies, it is really painful, when a person is cheated is love, then the person breaks down, that person can’t trust anyone else again. He feels they are doing too wrong with Lakshmi. He doesn’t know how will Lakshmi feel when she learns that he married her for saving his life, when she learns that he just loves Malishka. He tells that Lakshmi will be shocked and broken on knowing the cheat. He weeps in guilt.

Meanwhile, Neelam asks Pandit about his arrival. Pandit tells her that Rishi will be facing a problem, he should be at home at this time. Neelam asks the reason. She tells that Rishi is at his office. He tells that Rishi’s Markesh dosh isn’t away, he is just safe because he is married to Lakshmi. Malishka is shocked to see Rishi in guilt. Rishi tells that he isn’t happy to marry Malishka, he feels terrible that he is cheating Lakshmi. Malishka thinks if Karishma told her the truth that Rishi will fall for Lakshmi. She asks Rishi not to feel guilty, he is sensitive and that’s why he is thinking of Lakshmi.

She pleads him to get ready for the marriage. She asks him to smile once for her sake. He tells that he really likes it when Lakshmi smiles, now she will lose her smile forever because of him. He doesn’t think Malishka will understand this. He tells that he is doing wrong. She tells that things will get fine once they get married. He tells that she can never understand, he has failed Lakshmi. She asks him to get ready and come out, she will wait for him. Neelam asks Pandit what’s the problem now when Rishi is married to Lakshmi. Pandit tells that Markesh dosh is coming back as a big threat. He fails to understand the reason since Rishi is with Lakshmi. He asks Neelam where did Rishi go.

Malishka waits for Rishi. She is restless. She tells that she has to marry Rishi. Karishma asks what problem would Rishi face, he isn’t marrying anyone else. Lakshmi reaches there and overhears the conversation. She tells them that she heard everything, they are hiding the entire truth from her. She asks Virender to tell him the truth. She asks them what is the truth, why is the family so worried for Rishi. She tells that Rishi is her husband. Malishka calls the pandit. Lakshmi asks why is Rishi’s life in danger. She asks how will they save Rishi.

She knows that the family loves her and was hiding the matter to not give her tension. She tells that she has a right to know. She tells the pandit about her nightmare. Pandit asks her what did she see in the dream. Lakshmi tells that Rishi was going away from her. She tells that she told Rishi about her fear, and stopped him from going to office, but he didn’t listen to her. Neelam rebukes her for not telling them about the danger. Kiran arrives home and shocks Malishka. She tells that she won’t let Malishka do what she wants. Malishka asks how did she come back so soon.

She tells that Rishi and she will get married. Neelam asks Lakshmi why did she leave Rishi alone. She asks pandit what would they do now. Pandit apologizes to her. He tells that it will happen as destined. Lakshmi asks pandit to tell her what to do for Rishi. She is ready to do any puja for Rishi. Pandit asks her does she not know what’s happening in Rishi’s life. Stay tuned.

Reviewed Rating for Bhagya Lakshmi 27th December 2021 Written Update Rishi marries Malishka: 3/5 This rating is solely based on the opinion of the writer. You may post your own take on the show in the comment section below.