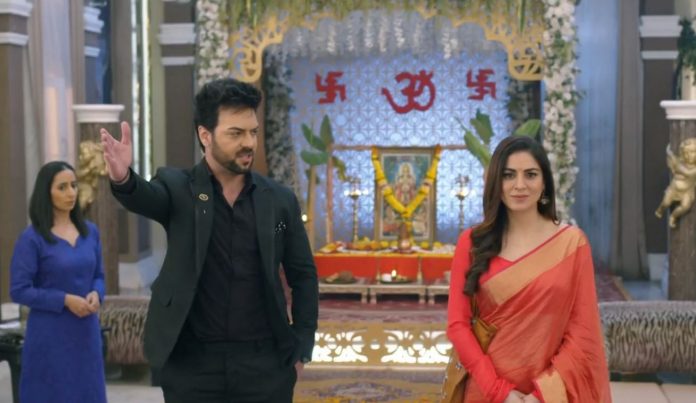 Kundali Bhagya 27th December 2021 Written Update Wow Preeta Preeta shocks Prithvi and Sherlyn, telling them that Mahesh had transferred the power of attorney of Luthras’ business to her. She tells that she is back in the Luthra mansion with all her rights. She tells that the Luthra house is also on her name, because of Mahesh’s decision. Prithvi is moved when Preeta claims the ownership of the mansion. Preeta tells the Luthras that she has come home to get her property share. She adds that she didn’t come for their sympathy, love or forgiveness. She shocks the Luthras and also Prithvi. She tells that she has come for her rights, her share and her money.

Kareena tells that she so expected this from Preeta, who is really greedy. Rakhi is shocked to know this. Bani rushes to wake up Karan and inform him that Preeta has come back. She tells that Preeta had told this herself that she has come back for money, she married Karan just for the sake of money. Karan is shocked to know this. Preeta aims to protect Mahesh first. How will Preeta reach her goals? Will Karan support Preeta or misunderstand her intentions? Keep reading.

Earlier in the show, Sherlyn asks Natasha to take Karan to his room. Natasha takes Karan to his room, while Kareena is angered that Preeta has come home. Kritika tells that she has no place for Preeta in her heart, Preeta is responsible for the wrong that’s happening in their lives. Preeta challenges Prithvi. He pays the money for her service. He mocks her for seeing poverty in her life. He tells that he is feeling sad for her, because she didn’t gain anything by marrying Karan. He asks her to think if she had married him, then she would have ruled as a queen. Keep reading.

Prithvi tells Preeta that her fate is really bad, if she had married him, then she would have been a queen. He tells that Karan isn’t with her. He adds that he doesn’t want to marry her now, because he hates her since the day when she had got him arrested. She reminds him how she got him beaten up. He laughs on her poverty. He tells her that he keeps everyone on the tip of his shoe. He mocks Preeta by telling her that he is wearing shoes worth lakhs, even his watch and clothes are costly. He tells that he rules on Luthras and their business also, he is the sole owner, he is the decision maker. He shows that he reigns on the house.

He thinks his words will shock Preeta. He enjoys to see her plight. Luthras watch their arguments silently. Sherlyn tells him that the puja is over, and even the pandit left, they shall wind up the things. Prithvi asks Preeta to take her money and get lost. He doesn’t want to see Preeta. Preeta picks the fallen money. She respects it since its Laxmi. She keeps the money in the temple. She tells Prithvi that she is sure that he won’t save money for any good deed, when he wastes money on his costly shoes. She tells him that she didn’t come to take 1000rs, but to get Luthras’ bank documents and all the cash.

Prithvi and Sherlyn are shocked to know this. Prithvi asks Preeta how can she take Luthras’ assets. She tells that she regrets that she didn’t come before, he is enjoying everything that belongs to her. Sherlyn asks Preeta how did everything belong to her. Preeta tells that Prithvi has taken over the property and assets, illegally, which actually belongs to her. He tells that her greed has got revived. He knows that she is addicted to enjoy a lavish life in the Luthra mansion. He isn’t interested in Preeta.

He doesn’t permit her to stay in the house. He tells that she isn’t deserving to become his wife or girlfriend. Sameer tells that Preeta is still Karan’s wife. Preeta thanks Sameer. She tells that she doesn’t need anyone’s support, because she is powerful enough. She tells the family that they shall know about her powers soon. She tells Prithvi that she has no interest in becoming his girlfriend, she can hire him for any small job, he is a loser. She adds that she has gained a lot by marrying Karan, she is Luthras bahu and the owner of Luthra property. The family is shocked. Sherlyn asks her to stop nonsense and leave. Preeta asks her to stop interrupting. Kritika thinks Preeta has gone mad.

Preeta asks them to take her seriously, she is their bahu and also the house owner. Bani madly tells that she doesn’t accept Preeta as Luthra bahu. Preeta tells that they will discuss their personal issues later. She asks Sherlyn not to talk in between. She tells them that Mahesh has given her the power of attorney of Luthras’ business, which means that she is the decision maker. She tells that the revenue from Rishabh’s event company will belong to her, she will decide everything for the business. She shocks Prithvi more by telling him that the Luthra house belongs to her, Mahesh had transferred the house property to her.

Sherlyn calls it impossible. Prithvi tells that its nonsense, Mahesh has given him the signing authority. Preeta tells that he is talking of the old times, while she is talking of the recent decision. She tells that the documents which Prithvi has with him aren’t valid, its null and void. He doesn’t accept it. She tells him that she got the proof as well. She shows him the property papers. She asks Rakhi to check the papers first and verify Mahesh’s signatures. Rakhi testifies that its really Mahesh’s signatures on the legal deed. Prithvi and Sherlyn are left shocked.

Preeta tells him that she will lose the Luthra property which he took over illegally. Sherlyn asks Rakhi to show the papers to her. Preeta asks her to let it be. She tells that Mahesh was mentally fine when he signed the papers. She adds that Mahesh also got a doctor along with him when he visited her, the doctor had certified that Mahesh was fit and fine, she has the medical certificate attached to the will. She tells Prithvi that he is standing in her house right now.

Natasha is with Karan. She thinks why did Preeta come home for 1000rs, as if she will get crores. She doesn’t want to lose her dreams. She thinks if Preeta really got poor and came for earning some money. She wants Karan to marry her. She goes to see what’s happening in the hall. She leaves Karan alone. Prithvi tells Preeta that she is lying, because Mahesh had given him the signing authority. Preeta asks him doesn’t he understand anything well. She tells him that its really simple thing. He tells that the house and business belongs to him. He asks her not to act clever.

He tells that he has earned everything by his hardwork, he runs the Luthras business and deals in crores, he has taken the business to peak and now he won’t let her snatch it. She tells that she is proud of him. She adds that his story is boring and unbelievable, he never worked hard in running the business. She asks him what did he do, he told the family that Mahesh gave the business powers to him. She asks why would Mahesh give his powers to him, why would Mahesh trust him so much. She tells that Mahesh would always think of his sons and family first, why would he give everything to Prithvi.

She asks is he mad to make the family believe so. She tells that he is just fooling them. She tells that his story is too fake. She asks him to know that Mahesh and her relation is of a father and daughter, whenever Mahesh needed her, then she stood by him, whenever she needed him, then he stood by her. She tells that Mahesh has written her will on her name, because he trusts her a lot. She tells that her story is believable and original. Prithvi fails to oust Preeta. How will Preeta stand against Prithvi and Sherlyn all alone, when none of the crazy Luthras are supporting her? Stay tuned for the next twists.

Reviewed Rating for Kundali Bhagya 24th December 2021 Written Update Real Stunner: 5/5 This rating is solely based on the opinion of the writer. You may post your own take on the show in the comment section below.