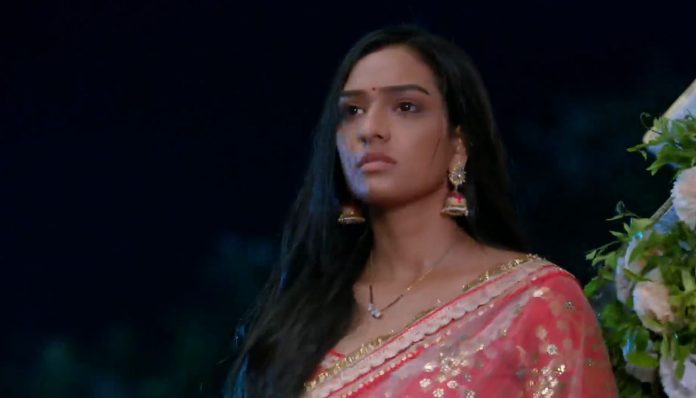 Bhagya Lakshmi 28th December 2021 Written Update Lakshmi shatters Lakshmi feels guilty that she had let Rishi go out of the house, even after sensing the bad omen. Neelam, Lakshmi and Virender along with the other family members are shocked to know the danger over Rishi’s life. Neelam asks Pandit to guide them to save Rishi. Pandit tells that it will happen as destined. Neelam tells that Lakshmi will be responsible if anything happens to Rishi.

Lakshmi promises Neelam that she will bring Rishi home safely. She walks on the road on her hurt foot and looks for Rishi madly. She realizes that he was going to meet Malishka at her house for some work. She heads to Malishka’s house. Rishi meets Malishka and they both get ready to get married. Pandit chants the mantras, while Malishka happily performs the rituals to marry Rishi. They take the wedding rounds, when Lakshmi arrives there and receives a huge shock by Rishi’s deceive. Keep reading.

She tells that Rishi and she will get married. Neelam asks Lakshmi why did she leave Rishi alone. She asks pandit what would they do now. Pandit apologizes to her. He tells that it will happen as destined. Lakshmi asks pandit to tell her what to do for Rishi. She is ready to do any puja for Rishi. Pandit asks her does she not know what’s happening in Rishi’s life. Stay tuned.

Karishma tells that his Kundali has some issue. Lakshmi asks about the threat on his life. Neelam calls Rishi. He doesn’t answer the calls. Malishka tells Rishi that they shall rush for the marriage now. She takes him to the mandap. Neelam panics. Virender asks her to relax. Neelam tells that Lakshmi will be responsible if anything happens to Rishi. She adds that she trusted Lakshmi, who would protect Rishi from every problem. She asks Lakshmi why did she let Rishi go away. She tells that she will die if anything happens to Rishi. Lakshmi promises Neelam that she will get Rishi safely home.

Neelam asks Virender to let Lakshmi go. She feels helpless that she can’t save Rishi, but Lakshmi can save him. She is angry on Lakshmi, but trusts her. Lakshmi feels hurt to walk on her hurt foot, but still tolerates the pain. She leaves the house. Rishi and Malishka sit in the mandap for rituals. Rishi feels guilty.

He visualizes Lakshmi. He recalls his marriage. He feels sad. Pandit asks Rishi and Malishka to exchange garlands. Virender tries to stop Lakshmi from leaving the house. Lakshmi tells that she will get Lakshmi home. Virender falls down and gets hurt. He is worried for Lakshmi. Neelam attends Virender. She calls the family members to help him. Rishi and Malishka exchange the garlands. Lakshmi calls him, but doesn’t get any answer. She wonders if he is fine. Rishi recalls Lakshmi during all the rituals of his marriage. Lakshmi gets hurt on the road. She doesn’t lose. She still attempts of reaching Rishi.

Rishi and Malishka see the stormy winds occurring suddenly. Lakshmi calls Malishka, who ignores the calls and lies to Rishi. She thinks to go to Malishka’s house somehow and meet him. Malishka asks pandit to hurry up. Pandit tells that they should stop the marriage. She tells that the marriage shouldn’t stop at any cost. Rishi also nods on her insistence. Karishma and Dadi take care of Virender. Neelam keeps calling Rishi. She grows worried knowing about the bad weather. Neelam is just worried for Rishi. Virender asks why did she sent Lakshmi after Rishi in such a bad weather. He tells that she vented angry on Lakshmi.

She tells that she was angry because Lakshmi didn’t tell her anything. He tells that Rishi would have not stopped on Neelam’s saying also. She tells that her son can never go against her. He asks what will she do if Rishi goes against her. She tells that it will never happen. Rishi doesn’t want Neelam to know that he cheated her for Malishka’s sake. He knows that he is marrying his love, but he isn’t feeling happy. Virender tells that Lakshmi went out in the storm, even she is a human. Neelam doesn’t understand anything. Rishi gets Neelam’s call when he finds his phone. He doesn’t answer the call.

He doesn’t want Neelam to hear the mantras and understand that his marriage is going on. He thinks if this marriage will break his marriage with Lakshmi. He worries that his Kundali Bhagya will be connected to Malishka after this marriage. Lakshmi doesn’t find any help. She cries helplessly. She continues to walk barefoot. She hears a lady telling that the storm is Matarani’s anger when something wrong is happening around. She adds that Matarani will either stop the wrong happening or not spare the wrongdoers.

She sees Lakshmi and questions her. Lakshmi tells the lady that she is looking for her husband. The lady asks her to make a new way as shown by Matarani. She tells Lakshmi that everything will change soon, she is a protector of her husband. Lakshmi doesn’t understand the lady’s words. The lady asks Lakshmi to go to the temple and pray, then her wishes will get fulfilled. Lakshmi prays to Matarani.

Reviewed Rating for Bhagya Lakshmi 28th December 2021 Written Update Lakshmi shatters: 2/5 This rating is solely based on the opinion of the writer. You may post your own take on the show in the comment section below.