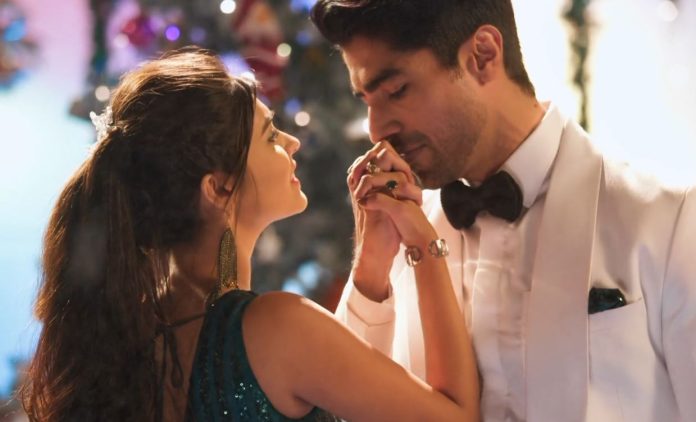 Yeh Rishta 27th December 2021 Written Update Magical ties Aarohi is seen worried and searching for the picture which can expose her lie. She smirks on finally finding the photo. Neil calls Aarohi from behind, making her scared. He asks Aarohi what is she doing here? Aarohi secretly folds the photograph and hides it behind her in her hands. Neil asks Aarohi what is she doing with kids’ party boxes? Aarohi lies to Neil that she was checking if any bread in the box has fungus. She also shuts the staff from telling the truth. Neil says he will get the bread changed. He thanks Aarohi and leaves.

Aarohi leaves with the picture. Staff thinks why Aarohi was lying. They stop thinking about it, thinking Aarohi is from a big family. Neil gets shocked hearing it. Aarohi thinks to burn the proof picture as soon as possible. She crushes the photograph badly. Akshara playing with kids collides with Aarohi and the photograph falls somewhere far away (inside the Christmas tree). This makes Aarohi worried. She searches for it in tension. Kids ask for Santa and he arrives. Reem asks Santa for true love. Vansh in Santa’s costume gets mesmerized by Reem and her wishes. He assures Reem of fulfilling her wish. Reem leaves thanking him.

Abhimanyu’s speech gets interrupted as he gets mesmerized seeing Akshara in a beautiful gown. He keeps staring at Akshara while “Ek Ladki Ko Dekha Toh Aisa Laga” plays in the background. Akshara walks forwards and looks at Abhimanyu. Abhimanyu gets interrupted with Vansh’s Ho Ho Santa sound. Kids remind Abhimanyu that he was something. Abhimanyu looks at Akshara and wishes everyone “Merry Christmas”. Kids too wish “Merry Christmas” to Abhimanyu. Abhimanyu goes to Harshvardhan and reminds him that he has just 1 hour.

Harshvardhan and Aarohi both are seen tensed. Harshvardhan sees Aarohi and asks her what is she doing? He asks Aarohi to give him the health camp photos as he has to give them to the PR team for publicity. Aarohi gets more worried. In Santa’s costume Vansh dances and plays with kids. Abhimanyu too plays and dances with kids. Akshara smiles watching Abhimanyu playing. She changes her expressions when Abhimanyu sees her. Birlas dance with kids and each other. Aaroi feels irritated. Manjiri and Abhimanyu distribute gifts to kids. Vansh brings Akshara and Aarohi to the dance floor. Aarohi goes away to find the lost photograph. Harshvardhan overhears Aarohi saying if her secret gets revealed?

Harshvardhan takes Aarohi aside and asks her what secret is she talking about? He asks her what happened to her? Aarohi looks at Harshvardhan with worry in her eyes. Abhimanyu and Akshara imagine dancing with each other happily. They also dream of being close to each other. “Jaaniye” plays in the background. In the imagination Abhimanyu picks up Akshara in his arms. Imagination gets interrupted and ends by loud music. Abhimanyu leaves and stands away from Akshara. Vansh keeps Neil away from Reem. He makes Birla dance. Aarohi is seen telling the truth to Harshvardhan.

Aarohi tells Harshavardhan that she lied to fulfill her dreams. She then says that she actually didn’t lie as everyone assumed that she saved Abhimanyu from fire. She says her one lie cannot reduce her ability. Aarohi asks Harshvardhan if she lacks anything? Aarohi asks Harshvardhan if he doesn’t want her to become his daughter in law. She says she doesn’t regret lying. Aarohi says she wants to become a power couple with Dr Abhimanyu Birla as Dr. Aarohi Birla. Harshvardhan thinks for some time. He asks Aarohi to search for the photograph and says he will also search it. Harshvardhan says that the photograph shouldn’t reach Abhimanyu’s hands.

Everyone gets shocked with Goenkas’ arrival at Birla’s Christmas party. Manish tells Harshavardhan that they came on his insistence. Harshvardhan looks here and there and apologizes to Manish for his lie by folding his hands in front of everyone. He recalls how Anand explained to not anger Abhimanyu who is going to be the face of their hospital. Anand also explained to Harshvardhan to not make enemies with reputed people like Goenkas as it’s not good for them. Unaware of reality, Manish forgives Harshvardhan, making everyone happy. Anand takes everyone inside. Aarohi thinks that once she finds the photograph everything will go fine.

Everyone gets surprised to see that it was Vansh in Santa’s costume. Reem feels shy. Aarohi gets angry on finding a blank paper instead of a photograph she is searching for. Goenkas and Birlas dance with each other happily. Akshara feels thankful towards God thinking that everything got sorted. In the next episode, Aarohi will inform Harshvardhan, Anand and Mahima that Akshara is missing. Anand will say that Akshara will return. Aarohi will say that Akshara can’t be found anywhere and everyone is worried for her at home. Worried Abhimanyu will be seen searching for Akshara outside the hospital. A guard will tell worried Abhimanyu that Akshara left in the afternoon only.

Reviewed Rating for Yeh Rishta 27th December 2021 Written Update Magical ties: 4/5 This rating is solely based on the opinion of the writer. You may post your own take on the show in the comment section below.