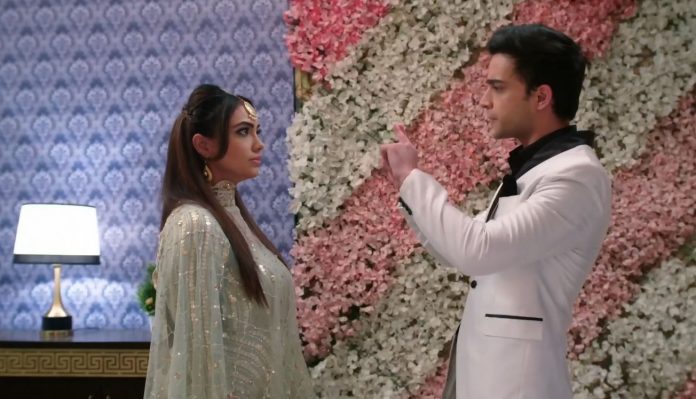 Kumkum Bhagya 29th December 2021 Written Update Rhea loses Rhea loses out her temper when Pallavi tries to pacify her over Ranbir’s mistake. Rhea misbehaves with Pallavi and leaves the latter angered. Aaliya tries to control Rhea, as she knows Rhea’s temper well. She apologizes to Pallavi on Rhea’s behalf. Ranbir handles Rhea, while Aaliya speaks to Pallavi. Pallavi tells Aaliya that whatever Prachi said is mostly right. She praises Prachi for having respect for everyone in the family.

She tells that Prachi values relations and knows the limits to never cross. Ranbir tells Rhea that they are stuck in a worse love triangle, because Rhea loves him, but he doesn’t love her. Rhea is shocked to hear Ranbir’s straight-forward statement. She tries to force her love on him, but he doesn’t fall in her words. Keep reading.

Dida tells that Rhea would feel bad if she hears this. Ranbir wants to know if Prachi felt the same as him. Prachi doesn’t want to feel love for Ranbir. Ranbir goes to ask Prachi about her feelings. He tells her that he knows her feelings, but wants to know it from her, why didn’t she give her contact to him. He wants his answers.

Shahana lies to Rhea that she was going to the bathroom. She doesn’t want Rhea to harm Prachi. She tells that she is really Prachi’s sister. Ranbir asks Prachi why doesn’t she complete her words always. Prachi tells that she will answer him and complete her word. He wants her answers. He asks her why does she always show attitude. She asks him why does he stay innocent always.

She tells that she didn’t give his contact number, but he knew her address, Sushma’s house, he should have come there to meet her. She tells him that she will tell him everything when the right time comes. He asks when will the right time come, when he learns to tolerate her anger. She tells that he is charming to manipulate anyone by his words. She asks him to go and talk to his mother. She asks why isn’t Pallavi telling everyone that Prachi is his wife. He asks is she feeling bad that he is Rhea’s husband. She tells him that she doesn’t care anything such now. She adds that he doesn’t know to enter heart and read mind. She taunts him.

She asks Pallavi why did she want Rhea to kiss Ranbir in front of everyone. She doesn’t want to step back from her duties, but she can’t take Pallavi’s commands. She makes Pallavi realize her mistake. She asks Pallavi not to forget that Prachi is her Bahu, its really a sin to make Rhea publicly kiss Ranbir, when Rhea isn’t Ranbir’s legally wedded wife. Prachi asks Aaliya to stay out of their family matter. She tells that she has learnt everything to respect elders, she would have not done this, but she knows that Rhea did wrong and even Pallavi was also involved. She tells that she never mentioned Pallavi’s name, because she respects Pallavi. Prachi counts her favors.

Rhea confronts Ranbir about not finding her when she already hinted about the Gajra. She asks him what’s going on between Prachi and him. She wants to know everything. He tells that Prachi has come to take revenge on him. He adds that he is standing with her. She tells that he never stands by her. She wants to know why did he hold Prachi’s hand. He tells that he knew about her Gajra trick, he didn’t wish to cheat in the game, he will never support her if she cheats anyone. He asks her to consider him out of the entire matter if she does anything wrong. She asks him why did he call Prachi his wife.

She provokes Pallavi against Prachi. She tells that Prachi never thought for the Kohlis, she has come to ruin Rhea’s life, she doesn’t care for anyone. She asks Pallavi to let this happen, else Ranbir will leave the family and go away with Prachi. Pallavi doesn’t want to lose her son. She permits Aaliya to do anything. She tells that she is with Rhea. Aaliya thanks her. Rhea asks Ranbir who is she if Prachi is his wife. Ranbir tells that Rhea is his mistake. Rhea is shocked to know this.

Reviewed Rating for Kumkum Bhagya 29th December 2021 Written Update Rhea loses: 3/5 This rating is solely based on the opinion of the writer. You may post your own take on the show in the comment section below.