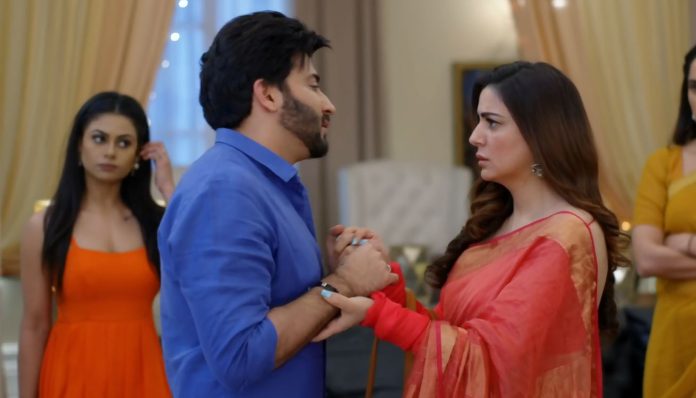 Kundali Bhagya 29th December 2021 Written Update New twist Karan rushes downstairs to meet Preeta. He loves Preeta a lot. He tells that Preeta is of him. He asks Preeta to take his name once. He is drunk and not in his senses. He tells her that he has missed her a lot. He gets too happy to see her back in the house. He tells that he wants Preeta back in his life, like they used to stay before. Prithvi interrupts them and asks Preeta to listen to him. Karan shouts shut up and makes Prithvi out of their conversation. He tells that he is talking to his wife, nobody should talk in between.

Sherlyn is worried that Prithvi’s plans will fail if Preeta unites with Karan. Prithvi and Sherlyn go away for a talk. He tells her that if Preeta returns in the house and takes over the Luthras business, then all his hardwork will go waste. He adds that he will not let this happen. He is ready to go to any extent to stop Preeta. He tells Sherlyn that he will get Preeta killed if she dares comes in his way. Preeta is saddened to see Karan’s depressed condition. She thinks she has to handle the entire family like before, without revealing her true intentions behind her coming.

She acts arrogant towards them just to show Prithvi and Sherlyn that she didn’t come for the family’s sake, but for money. She has just come for the family, but pretends as a greedy person to tackle the enemies. She doesn’t want to show the family as her weakness, because it will make easy for Prithvi to threaten her. Preeta acts fearless, but is really upset within. How will she face the peril planned by Prithvi for her? Keep reading.

Preeta asks Prithvi to return the papers if he wants. Karan comes there and shouts Preeta on seeing her in the house. He runs to her happily and hugs her. He tells her that he missed her a lot. Preeta controls her feelings when she meets Karan. He asks her if she feeling sorry. He asks her not to say sorry, she is welcome in the house, its her family, her house. He tells that he is very happy. Preeta tells him that she didn’t come for any apology, or to return in his life. He tells that she doesn’t need to apologize. He has missed her a lot and wishes she comes back to him.

He tells her that he started drinking in her memory. She asks him if Prithvi took over the house post Karan’s addiction to the alcohol. He tells that he will not drink now. He tells her that he missed her, like his entire family did. He feels he was wrong. He apologizes to her for being so rude and unkind towards their relationship. He begs her to forgive him. He tells that he is sorry for everything, he wants her back. He takes back his words. He asks her to take his name. Prithvi talks in between and gets rebuked by Karan. Karan tells that Preeta is his wife. Natasha thinks she stands no chance in Karan’s life.

Karan asks Prithvi to talk when Preeta wants to talk to him. He asks her not to talk in between his conversation with his wife. Preeta asks Karan to complete his words. Karan tells Preeta that he loves her a lot. Preeta cries on hearing Karan’s love confession. Karan faints down drunk. Preeta feels terrible to see his condition. Preeta goes to the room and cries. She thinks she didn’t come to take revenge for her insult, but to get back her rights. She wonders what happened with her family. Kareena tells that Karan fell in love with Preeta once again, he forgot whatever happened, he was apologizing to Preeta. Sherlyn tells them that she was shocked to see him hugging Preeta.

Kritika asks how can Karan say I love you to Preeta. Kareena tells that Karan was drunk, he would not forget everything if he was in senses. Rakhi tells that Karan remembers everything, but still he wants Preeta back, he wants Preeta’s love again. Rakhi adds that Karan and Preeta love each other a lot. Preeta tells that she loves Karan a lot. She thinks she took the right decision by coming back home, she loves the family a lot. She wants to be strong enough to tolerate the wrong people in the house. She doesn’t want to tolerate Prithvi. Kareena asks Rakhi to stop supporting Preeta.

Prithvi is angered on Preeta. He makes a drink for himself. He asks Sherlyn to leave him alone. She asks him to calm down. He asks her why did Preeta come back on the day when he planned to get Natasha married to Karan. He tells that he was going to step in real estate, he had planned a big event, its organized from Luthras, he is their representative, if Preeta takes over the business, then his plan will fail. He tells that he will get Preeta out of his way. Preeta meets the family again. She asks Sherlyn if she dislikes to see her back. She tells that she has come back home, its better that Sherlyn brings a smile on her face and gets habitual. Kareena calls her shameless.

She criticizes Preeta. Preeta reminds Kareena that she is the owner of the house now. Kritika tells that they don’t believe anything. Prithvi asks them if any special meeting is going on without informing him. Preeta taunts him that she didn’t fire him from the job yet. She calls the staff and tells that the rules will be changed in the house, she will be the ruling person, the decision maker, Prithvi is just a househelp in the house now. She tells them that she is the owner now, her rules will be followed.

She tells Prithvi that she has seen his expenses, he has to earn the money and return it to her. She bosses over Prithvi. He tells that this will happen when he accepts her decision. Kareena, Sherlyn and Kritika also refuse to accept Preeta as the house owner. Preeta asks them to check the legal documents, nobody can make her out of the house, they have to stay by following their rules, else they can leave right away.

Reviewed Rating for Kundali Bhagya 29th December 2021 Written Update New twist: 5/5 This rating is solely based on the opinion of the writer. You may post your own take on the show in the comment section below.