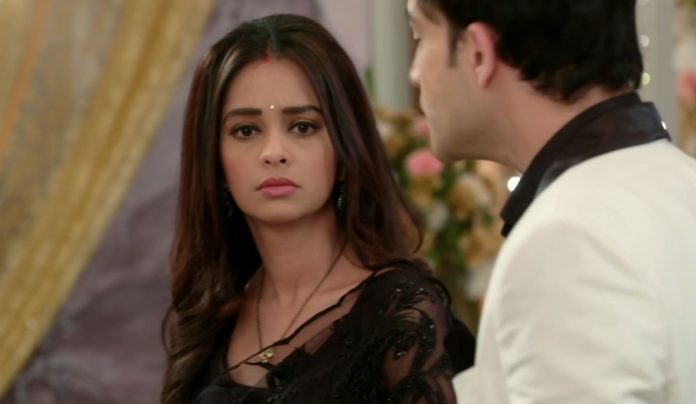 Kumkum Bhagya 30th December 2021 Written Update New conspiracy Rhea tells Aaliya that she had challenged Prachi that this night will be her last night in the house. Aaliya tells that once Prachi takes that drink, she will get intoxicated and then nobody can save her from signing the papers. Ranbir asks Prachi to stop arguing with him, and just have the juice drink. Aaliya, Rhea and Pallavi keep an eye on Prachi. The trio smiles seeing Prachi have the spiked drink. Prachi consumes the spiked drink, unaware of Rhea and Aaliya’s plans. Will Shahana come as a savior and change the drink in time to save Prachi from the big conspiracy? Will Prachi be able to protect her rights and also her baby from evil Rhea? Will Ranbir learn about Prachi’s pregnancy? Keep reading.

Earlier in the show, Aaliya tells that Prachi won’t remember that she signed the papers, then she won’t have any right to get the family arrested. Pallavi calls it wrong. Aaliya asks her to think that Prachi will get away from them. She provokes Pallavi against Prachi. She tells that Prachi never thought for the Kohlis, she has come to ruin Rhea’s life, she doesn’t care for anyone.

She asks Pallavi to let this happen, else Ranbir will leave the family and go away with Prachi. Pallavi doesn’t want to lose her son. She permits Aaliya to do anything. She tells that she is with Rhea. Aaliya thanks her. Rhea asks Ranbir who is she if Prachi is his wife. Ranbir tells that Rhea is his mistake. Rhea is shocked to know this.

Ranbir hurts Rhea’s heart by calling her a mistake. He tells that Prachi, Rhea and he are stuck in a strange love triangle, he doesn’t love her. She tells that he has married her by all his wish, his parents happily accepted her as their Bahu, everyone was happy, but since Prachi came back, nobody is happy. She lies to him that Prachi confessed that she had come to make Ranbir feel rejected. He asks her what does she mean. She asks him to understand Prachi’s motives.

She sees Shahana and asks did she hear Ranbir and her talks. Shahana tells that she didn’t hear anything, she just came to protect Prachi against her bad sister. Rhea asks her to get out. Prachi asks Rhea to never scold Shahana. She warns Rhea. She tells that she will throw Rhea out when time comes. Rhea tells that Ranbir was her love, but Prachi came in between. She adds that Prachi will always remember her right place. She shows her mangalsutra. Prachi feels Rhea has become her Sautan, because she was never a good sister. Prachi advises Rhea to pack her bags and find a new place. She tells that Rhea will be leaving after two days. Rhea reminds the challenge timeline.

She tells that Prachi will leave first. She goes to Aaliya, who reminds her about spiking Prachi’s drink. Aaliya tells that once Prachi drinks the juice, then she will sign the papers. Prachi makes a wish that her baby comes soon, her baby stays healthy and settles scores with the wrongdoers. Ranbir wishes that Prachi gets everything she wishes. Shahana tells Prachi that she is misunderstanding Ranbir, he isn’t lying, he really cares for Prachi. Prachi isn’t interested in it. Ranbir asks Prachi to ask Shahana about the opinion. Prachi tells that its their own perception. She asks him not to take Shahana’s words seriously. She feels Ranbir always fools her. Ranbir asks her when did he do that. She tells that she doesn’t want to ruin his impression in front of Shahana.

He tells that her words are hurting him. She replies that his words are giving her more pain. She tells how much she had tolerated in one month. He asks her to speak out what she has to say. He wants the misunderstandings to end. She tells him that she lied to her all the time, he didn’t try to contact her. She tells that she had to hear Rhea’s taunts. She blames him for hurting her so much. He tells that he didn’t wish to marry Rhea. She asks him not to give her any lame excuses. She doesn’t want to hear any nonsense.

He asks her if she knows about Rhea’s blackmailing move. He tells that she is scolding him as if he did a big mistake. She calls his move a sin. He tells that he just supported his family, Rhea had threatened of suicide, she had threatened to get his family arrested, he was helpless to stop Rhea’s madness and proposed her for marriage, he never cheated anyone. He tells that he didn’t cheat Prachi. Prachi tells that he proved that she was never his family. She asks him why did he not think of her. Pallavi comes to call Ranbir and Prachi. She asks them not to leave the party. She doesn’t want anything to do wrong.

She asks them to stay back in the party and talk. Aaliya and Rhea send the spiked juice for Prachi. Ranbir asks Prachi to have it. Everyone waits for Prachi to drink that juice. Ranbir reminds Prachi their old times. Prachi refuses to have orange juice. She tells that she is allergic to orange juice. She asks the waiter to get mango juice for her. Shahana asks Rhea what is she doing. She taunts that Rhea got scared like she is hiding something. Ranbir asks Prachi what is she hiding, why did her behavior change completely.

Prachi holds her stomach. Ranbir observes her. She acts of cleaning her clothes. Ranbir’s friend takes the spiked drink. Rhea and Shahana get into an argument. Pallavi asks Shahana not to disturb them. Rhea goes to make the new drink for Prachi. Aaliya asks Pallavi to attend her guests. Ranbir asks Prachi to go and change her clothes if she wants. Prachi taunts him for always posing problems for her.

Reviewed Rating for Kumkum Bhagya 30th December 2021 Written Update New conspiracy: 3/5 This rating is solely based on the opinion of the writer. You may post your own take on the show in the comment section below.