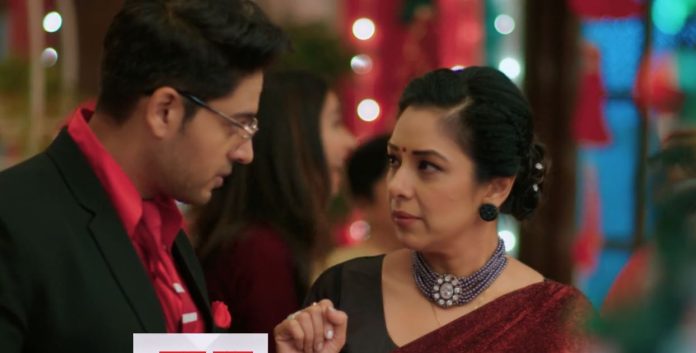 Anupama 30th December 2021 Written Update Anu confession Anuj apologizes to Anupama and requests her to not cry. He says he would never do this again and will do as she says. Anupama asks him if he will do whatever she says? Anuj says promise. Anupama asks Anuj to sit on the chair. Anuj suddenly sits on the chair as if he got scared by Anupama. Anupama asks him to eat carrots like the cartoon’s rabbit. Anuj says, “as you wish, my lord”. He starts eating rabbits and Anupama looks at him smiling. Anuj notices Anupama and thinks that the latter’s behavior seems different. He thinks what happened to Anupama?

Anupama thinks if she should tell Anuj what is happening to her? She stops herself from telling anything to Anuj, thinking of Malvika. Anupama further thinks that Malvika is childish like Pakhi in nature. She thinks that Malvika may feel that she (Anupama) is coming in between Anuj and her (Malvika). Anupama thinks that if Anuj can wait for years to reveal his feelings to her then she can too wait for some days. She tries to control her feelings. Anupama thinks that she would have to tell Anuj if he asks directly. At Shah house Kavya and Malvika argue about who should put a star on the top of the Christmas tree. Kavya says that only special people put stars on the top of the Christmas tree.

Malvika asks Kavya if only special ones can pur star, then why she put the star on the top of the Christmas tree. She suddenly changes her behavior and asks for a high five from Kavya. Kavya refuses Malvika’s request. She angrily asks Malvika if she is laughing at her after insulting her? Kavya tells Malvika that she looks younger but is actually older to her. She wishes that someone teaches Malvika some manners to talk to elders. Kinjal requests Kavya to stay silent. Kavya says Malvika has no manners to talk to elders. She says Makvika calls her elder brother by his name, Vanraj as “Raj ” and addresses Baa as darling. Kavya calls Malvika, “Paglait Kahinki (Crazy Girl)”. This shocks everyone and angers Malvika.

Angry Malvika questions Kavya if she called her crazy? Kavya tries to distance Malvika who jumped to hug her. Vanraj comes from behind and stares angrily at Kavya. On the other hand, Anuj tells Anupama that enough is enough. He asks Anupama to give direct answers to his questions. Anupama agrees. Anuj asks Anupama, why is she behaving differently since many days. Anupama stutters and asks her? Anuj tells Anupama that she is looking at him the way he used to see her. He further tells Anupama that she is avoiding looking into his eyes just like he used to do around her. Anupama gets nervous and Anuj says he used to get nervous seeing her, the way she is getting nervous right now.

Anuj says his behavior was justified as he loves her. He questions Anupama if she fell for him? Anuj requests Anupama to say that she loves him. He again requests her to confess as she wants to, as it will make him die with happiness. Anuj asks Anupama if she loves him. Anupama turns around, shying. Anuj jumps with happiness. It turns out to be Anuj’s imagination. Anupama looks at Anuj weirdly. Anuj thinks how can he dream of something which can never get fulfilled. He thinks Anupama would never fall for him. Anuj receives a message and smiles thinking that Malvika’s Christmas gift got ready.

At Shah house, Malvika interrupts Vanraj when he is thinking about what to wear to the Christmas party. She enters his room and excitedly thanks him for finding a place for their project so soon. Vanraj tells Malvika that he wanted to give her this news as a Christmas gift. Malvika asks Vanraj to think of some other Christmas gift and consider the news as a Pre- Christmas gift. She asks where Kavya is and jokes that Kavya would have asked to give a US return ticket as a gift to Malvika. Both of them laugh. Malvika then asks a puzzle question which Vanraj answers it easily. Kavya comes and says that nobody comes so close in a short period of time.

Kvaya asks Malvika to tell since when did she and Vanraj know each other? Malvika and Vanraj scares Kavya with their joke that they have not known each other since 17 but since 18 days. Both Vanraj and Malvika laugh at Kavya’s condition and make fun of her. Kavya gets angry at her for making fun of her. She asks Malvika if she is flirting with her husband? Malvika tells Kavya that she is doing business with Vanraj not flirting. She leaves telling that till now she didn’t try to flirt with Vanraj. Baa takes her first selfie near the Christmas tree. Shahs also arrive in the hall dressed up in red. Bapuji, Mamaji and GK are seen dressed up as Santa.

Anupama and Anuj also arrive dressed up in red and black. Everyone gets mesmerized seeing Anupama and Anuj’s Christmas look, especially Malvika. Malvika says Anuj and Anupama will get the best dressed people award. Samar says Anuj and Anupama will get the best couple award too. This creates awkwardness in the surroundings. Anupama hands over the cake to Malvika. Malvika says it is carrot halwa cake not proper carrot cake. Anuj asks Malvika to trust him that it’s very delicious. Anupama explains to Malvika that everyone gajar halwa cake trends in India. She and Anuj give a proper carrot cake baked by Anupama to Malvika.

Malvika tells Anupama that she didn’t think that the latter would be able to bake carrot cake. Anupama says to Malvika, then she would have learnt it from her. Malvika calls Anupama a perfect woman. She goes on her knees and requests Bapuji to get Anuj and Anupama married. Malvika’s words shock and surprise people present at the party. She requests Bapuji to accept her request and says that she wishes to call Anupama her sister in law (bhabi). Everyone gets awkward. GK tells Malvika that it’s a big and important decision and cannot be taken as a joke. Anuj tells Malvika that it’s not funny. Malvika tells Bapuji that if she relies on Anuj then she would never get a sister in law.

She requests Bapuji to accept her request and says that love can be seen in Anuj and Anupama’s eyes. Anuj looks at Anupama and the latter lowers her eyes to look away. Bapuji asks Malvika to talk about it later. Malvika grows adamant, Bapuji asks GK to explain to Malvika. Anupama asks Malvika to stop. Anuj thinks that Malvika gets disturbed and irritated if someone objects to her. He gets tensed wondering how Malvika will react now. Disturbed Malvika goes somewhere. Anupama stops Anuj from going behind Malvika and instead herself goes to console Malvika. Kavya says Anuj has spoiled Malvika as she got angry after making a mistake herself. Anuj asks Kavya to stop her nonsense.

Kavya tells Anuj that he can’t show her attitude every time as she doesn’t owe anything to him. Anupama runs behind Malvika and stops her with a cute lie. She grabs Malvika and doesn’t let her go away. Malvika tells Anupama that she may get hurt in her trials to go away. She fails to make Anupama leave her and asks the latter what she eats to become so strong. Anupama says she heard Baa’s scoldings till 25 years. She tells Malvika that she will become strong too after getting scolded from Baa once. Malvika tells Anupama that her cuteness act won’t calm her anger. She asks Anupama to leave her.

Anupama says sorry to Malvika. Malvika asks Anupama to hang her sorry on the Christmas tree. She asks Anupama why she scolded her as she didn’t say anything wrong inside. Malvika calls Anuj and Anupama an ideal couple. She again questions Anupama that why she got scolded instead of appreciation on talking about her and Anuj’s marriage. Anupama tells Malvika that she isn’t wrong. She explains that there is a right time, place and situation to talk about something. Anupama asks Malvika that she didn’t talk about her and Anuj’s marriage out of fun. Malvika agrees. She explains to Malvika that in this country, marriage is not a joke and people here take it seriously.

Anupama explains to Malvika that responsibilities get higher with a big family. She says that they need to utter each and every word very carefully as many generations stay under the same roof. Anupama asks Malvika to think of something which will seem absolutely normal for Samar, Pakhi, Nandini, Paritosh and Kinjal; the same thing may be different or weird for Baa and Bapuji. She explains to Malvika that in the Baa and Bapuji’s generation marriage was of great significance. Malvika realizes her mistake and apologizes to Malvika. Anupama asks Malvika to just be careful of her words from next time.

Malvika leaves joking again by asking Anupama to become her sister-in-law. Anupama scolds notorious Malvika just like her own kid. Anuj gets happy seeing Malvika happy. Anupama and Malvika look at each other smiling. In the next episode, GK and Bapuji will ask Anupama to accept that she loves Anuj and agree to get married to him. They will ask Anupama what is she waiting for? Anupama will tell Anuj that she will put garland around his neck only. Anuj will ask Anupama what else she wants, saying that his heart already belongs to her.

Reviewed Rating for Anupama 30th December 2021 Written Update Anu confession: 4/5 This rating is solely based on the opinion of the writer. You may post your own take on the show in the comment section below.