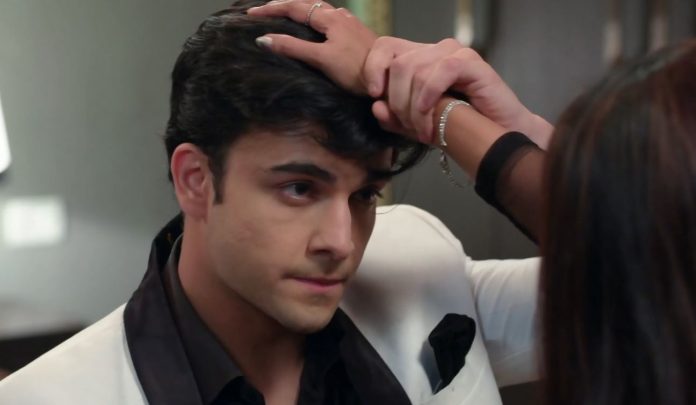 Kumkum Bhagya 31st December 2021 Written Update Secret out Rhea tricks Prachi into signing the legal papers. She tells that the family will be in trouble if she delays to sign. Prachi asks Rhea where to sign. Rhea tells that she needs the signs on all the papers. She asks Prachi to quickly sign it. Pallavi looks at them. She thinks once Prachi signs the papers, then she will be going out of the house forever, she will lose all the rights that she has been claiming till now. Prachi signs the papers. Pallavi checks the papers.

She tells that Prachi has herself left the rights, using which she had come home. She can’t wait to throw out Prachi from the house. Ranbir asks Prachi to swear on him and tell the truth, whatever she is hiding. Both Ranbir and Prachi are intoxicated. They both share a moment. Prachi gets close to reveal the truth of her pregnancy to Ranbir. Will she tell the truth to Ranbir? Keep reading.

Earlier in the show, Ranbir reminds Prachi their old times. Prachi refuses to have orange juice. She tells that she is allergic to orange juice. She asks the waiter to get mango juice for her. Shahana asks Rhea what is she doing. She taunts that Rhea got scared like she is hiding something. Ranbir asks Prachi what is she hiding, why did her behavior change completely.

Prachi holds her stomach. Ranbir observes her. She acts of cleaning her clothes. Ranbir’s friend takes the spiked drink. Rhea and Shahana get into an argument. Pallavi asks Shahana not to disturb them. Rhea goes to make the new drink for Prachi. Aaliya asks Pallavi to attend her guests. Ranbir asks Prachi to go and change her clothes if she wants. Prachi taunts him for always posing problems for her.

Prachi asks Ranbir to solve the problems. Jai meets Ranbir and Prachi. Ranbir tells that Jai and he had some important problem. Prachi stays in the party. Waiter tells Rhea that Prachi didn’t take the orange juice, she needs mango juice. She asks him who had taken the drink. Ranbir talks to Jai and drinks the spiked juice. He tells that he was really feeling thirsty. Rhea asks the waiter to take the spiked mango juice for Prachi. Shahana gets into a dragging argument with Aaliya. She tells that they shall talk of someone else than Sarita, like Tanu. Waiter tells Prachi that he got the mango juice for her. Prachi drinks the spiked juice. Rhea, Pallavi and Aaliya get glad.

Prachi tells that she will read the papers first. Rhea tells that any delay will be proved fatal for their parents. She makes Prachi sign the papers. She goes away with the papers. Aaliya and Pallavi keep an eye on Prachi. Ranbir tells Jai that he needs some rest, he is burdened since he married Rhea. He asks Jai to take care. He goes to his room to rest. He gets to see Prachi. He thinks its Jai who is looking like Prachi. Prachi speaks to him. Ranbir tells that even Jai’s voice has become like Prachi. She gets angry that he is calling her Jai. She goes to argue with him. Aaliya asks Rhea is she okay. Rhea quickly scans the documents signed by Prachi.

She doesn’t care what anyone calls her, she just wants Ranbir. Prachi calls out Ranbir. He tells that he slipped down on the floor. She asks him how can he call her Jai. He tells that she doesn’t know smiling. She tells that she can smile. She smiles and shows him. He tells that he can’t see her smile. He goes to take her help and get up. Prachi also falls down. They both share an eyelock. They confess their feelings that he missed her a lot. Shahana looks for Prachi in the party. She wonders if Rhea has trapped Prachi.

He tells that he loves her a lot. He tells that her love heals his heart. He asks Prachi to swear on him and tell him what is he hiding. Rhea looks for Ranbir and Prachi. Aaliya asks are they together. Aaliya is worried. Rhea tells that Prachi challenged her that she will oust her from the house. Pallavi tells that Prachi is intoxicated, she will just remember the happy past and get close to Ranbir. Aaliya doesn’t think this can happen. Ranbir asks Prachi to just tell him the truth. Prachi agrees to tell him. He tells that if she can’t tell him the truth, then she can write a letter like a love letter.

Reviewed Rating for Kumkum Bhagya 31st December 2021 Written Update Secret out: 3/5 This rating is solely based on the opinion of the writer. You may post your own take on the show in the comment section below.