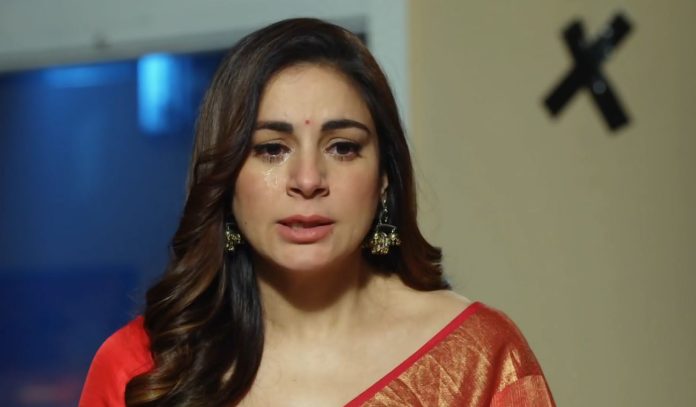 Kundali Bhagya 31st December 2021 Written Update Preeta stirs Prithvi talks to his lawyer. He asks how did Preeta change the entire game, when the lawyer assured that the papers are original and nobody can challenge it. He throws his anger out on the lawyer, while Sherlyn overhears the conversation. Rakhi wants to know Preeta’s real intentions behind coming back. She knows Preeta is only their well-wisher. Preeta secretly visits the basement to meet Mahesh. She is shocked to see Mahesh chained. She cries for Mahesh. She tells that she can forgive anyone in her life, but not Prithvi and Sherlyn, who had ruined Mahesh’s mental state. What will Preeta do against Prithvi? After forgiving Karan, will Preeta reconcile with him and become a power couple like before? Keep reading.

Preeta goes to meet Mahesh, but comes across Rakhi. Rakhi tells that she always knew Preeta well. She believes that Preeta is still the same. She just wants to tell Preeta that she is still standing by her. She asks Preeta to tell her whatever is there in her heart. She promises to not tell anyone about it.

Preeta pretends that she doesn’t understand anything. Rakhi asks why is she doing this. She tells that nothing stays hidden from a mother. Preeta tells that she really has the will papers. Rakhi isn’t talking about the papers, but Preeta’s pretence. She asks the reason for the false put up. She tells that her Preeta was the one who took care of everyone. She can’t accept that Preeta married Karan for the sake of money. She knows that Preeta can never make relations for money.

Preeta asks Rakhi to think anything, she can’t help. She sends away Rakhi. She thinks to go and meet Mahesh later on after everyone sleeps. She doesn’t want to tell the truth to Rakhi, else the news will spread. She doesn’t want Prithvi to find any truth. She tells that Prithvi shouldn’t doubt on her. She wants to find out Rishabh and bring him back. She knows Prithvi is strong, but she doesn’t have to get scared of him. She prays to get strength to face a devil like him. She wants to throw out Prithvi from the house. Prithvi speaks to his lawyer. He gets hyper. Sherlyn is scared of Prithvi’s anger.

She goes away in tension. Lawyer tells Prithvi that they shall meet tomorrow and check the papers. Prithvi doesn’t want to lose out to Preeta, after working so hard to dupe the Luthras. Kritika tells Sameer that Preeta isn’t a good person, Preeta has come to rule them. Sameer tells that Preeta is good at heart, she is better than Prithvi to rule over them. She asks him not to become foolish again. He tells that she has feelings for Prithvi, so she is upset that Prithvi lost everything again, she likes Prithvi and is favoring him over Preeta. She gets angry at him.

He tells that his heart believes Preeta that she is really a good person. Preeta has a big task on her head, that’s to find Mahesh and help him. She thinks of speaking to Sarla. Her battle isn’t so easy. She knows that Sarla would be so worried for her. She can’t explain Sarla that her fate brought her back to the family, who are in a huge mess right now. She tells that she has to solve everything one by one.

She remembers her struggles in taking Sarla’s permission to reach out to the Luthras. She has promised Sarla that she will be strong, not emotional like before, she will just help Rakhi and Mahesh, and save the family from Prithvi. Sarla had given the permission to Preeta to let her decide for her own life. Sarla also wants Preeta to do her wishful and lead her life, but not give up on her esteem.

Preeta wishes that she could tell Sarla that Kaan is guilty on his words spoken in anger. She has forgiven Karan. She tells that she will solve all the problems going on in the house, but first she will find Mahesh. She thinks everyone would have slept by now. She goes to see the family members sleeping in their rooms. She meets Karan. She sympathizes with him. She regrets whatever happened in the past. She never wished that Karan lands in this state. She recalls Karan’s words. She thinks its two years now, but Karan didn’t change, Karan still loves her. She is glad to know that he loves her. She wants to meet him and talk to him when he is in his senses. Karan holds her hand in sleep.

Preeta stays by his side. Karan wakes up and sees Preeta with him. He tells that he loves her a lot. She makes him sleep. She goes out of the room. She thinks she has checked every room, Mahesh isn’t in any room, he might be in the basement. She rushes to the basement to see Mahesh. Nurse injects Mahesh to put him to sleep. She thinks he will sleep till the morning now. She is also fed up of his madness. Preeta finds the way to the basement. She sees Mahesh tied up in chains. She cries seeing him. She doesn’t want anyone to see her. She finds the nurse in the other room and locks the door. She unlocks Mahesh’s room and goes to see him. She can’t control her tears. She swears that she will never forgive Prithvi, who has put Mahesh in this state.

Preeta asks Mahesh to open eyes and see her, she has come on his call. She thinks why is Mahesh chained, how can Prithvi treat Mahesh like animals. She feels sorry that she got late in coming home and rescuing Mahesh. She tells that she will free Mahesh soon and take him to the outside world to make him lead a good life with pride and power. She promises to save Mahesh, return his lost name and fame, respect and rights. She wants to take care of Mahesh.

Nurse finds the door locked from outside. She shouts to alert Prithvi. Preeta doesn’t want the nurse to make noise and call the family. Nurse calls Prithvi and informs that something is wrong, someone has locked her in the room. Preeta tries to leave, but hides on seeing Prithvi come there. He opens the door. He asks the nurse to let him check the basement. He decides to snatch the powers from Preeta and ill-treat her. Stay tuned.

Reviewed Rating for Kundali Bhagya 31st December 2021 Written Update Preeta stirs: 4/5 This rating is solely based on the opinion of the writer. You may post your own take on the show in the comment section below.