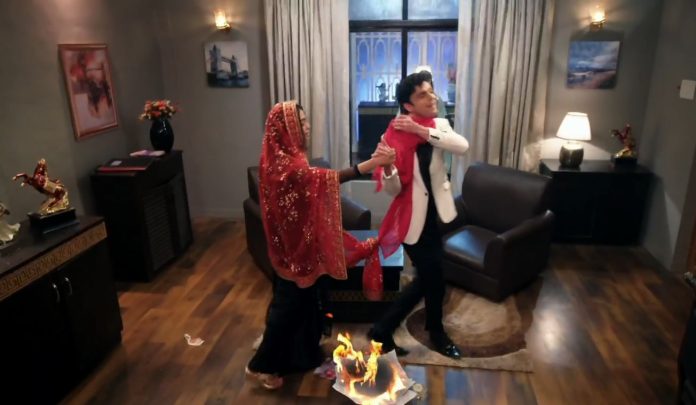 Kumkum Bhagya 3rd January 2022 Written Update Pranbir Wedding Prachi and Ranbir share a hug. She isn’t able to tell him the truth. He advises her to not tell anything and simply write it to tell him. He wants to know what is she hiding. She tells that she has no paper and pen to write. Ranbir gets it for her and asks her to just write down. Prachi writes an emotional letter for Ranbir. They both are intoxicated. They get close while she hands over the letter to him. Ranbir reads the letter. She writes about Ranbir’s three dreams, which she shared with her. One of the dream was her pregnancy, their parenthood.

She writes that his dream of marrying her was fulfilled, and then also his startup dream was accomplished, now the third dream is also getting fulfilled. She mentions about her pregnancy. She writes about her pregnancy. Prachi mentions that she is pregnant, and Ranbir is going to be a father. Ranbir can’t believe that his dream is coming true. He asks Prachi is this true. Prachi tells its true.

He decks up Prachi as his bride and lights some papers there to ignite the fire. He ties their gathbandhan. He tells that they will get married again. Ranbir and Prachi take the marriage rounds in their room. Rhea comes there looking for Ranbir. She is scared that Ranbir and Prachi can get close. Her fears turn true when she finds Ranbir and Prachi marrying. Rhea is shocked and feels helpless. What will Rhea do next? Keep reading.

Earlier in the show, Ranbir tells Prachi that he loves her a lot. He tells that her love heals his heart. He asks Prachi to swear on him and tell him what is he hiding. Rhea looks for Ranbir and Prachi. Aaliya asks are they together. Aaliya is worried. Rhea tells that Prachi challenged her that she will oust her from the house. Pallavi tells that Prachi is intoxicated, she will just remember the happy past and get close to Ranbir. Aaliya doesn’t think this can happen. Ranbir asks Prachi to just tell him the truth. Prachi agrees to tell him. He tells that if she can’t tell him the truth, then she can write a letter like a love letter.

Ranbir asks Prachi to write a letter and tell him the truth. She tells that she doesn’t have any pen or paper. He gets a paper and a pen for her. He asks her to write, he will read it. She tells that she will feel shy if he reads it while she writes. She asks him to go and turn around until she completes the letter. He reminds her the moments when they left in their old house, she used to write a letter in anger mode, now she is writing with love. He is excited to know what she will write. She writes a letter for him. She is happy that all his three dreams got completed. She writes that he is going to be a father soon. She also writes that she loves him. She gets tensed to handover the letter to him.

He cries happily. She asks him isn’t he happy. He tells that he is the happiest man in the world right now, she has given him the biggest happiness. He tells that the letter is the most precious one for him, he will keep it really safe. He keeps the letter in his coat pocket, saying he will keep it close to his heart. He thanks Prachi and hugs her happily. Prachi makes him feel the baby. Ranbir gets emotional that his dream has come true. He is grateful to her for giving him such a big happiness in a moment. He tells that he wants to do something. He wants to hear the baby’s heartbeat and feel the baby.

Shahana tells that very soon Prachi will oust Rhea. Rhea replies that Prachi will herself get ousted from the house. Shahana thinks Rhea is day dreaming. Rhea tells that her dream is already fulfilled. She wants to give a breaking news. Shahana doesn’t hear it out. Rhea wants Prachi to regret her coming. Ranbir consoles Prachi. She reminds him the promise he made to her. She asks him why did he marry Rhea. He tells that he was badly trapped, the marriage isn’t valid when he didn’t divorce Prachi.

He tells that he will get the real fire. He asks her to wait. He gets a pot and burns papers to ignite the fire. He shows the chunri brought from the temple. She tells that Mata rani has sent it for her. He adorns her with love. He makes her wear the special chunri. They both are still intoxicated. He gets a cloth for gathbandhan. They prepare for the marriage. Rhea comes there and watches them together in shock.

Reviewed Rating for Kumkum Bhagya 3rd January 2022 Written Update Pranbir Wedding: 3/5 This rating is solely based on the opinion of the writer. You may post your own take on the show in the comment section below.