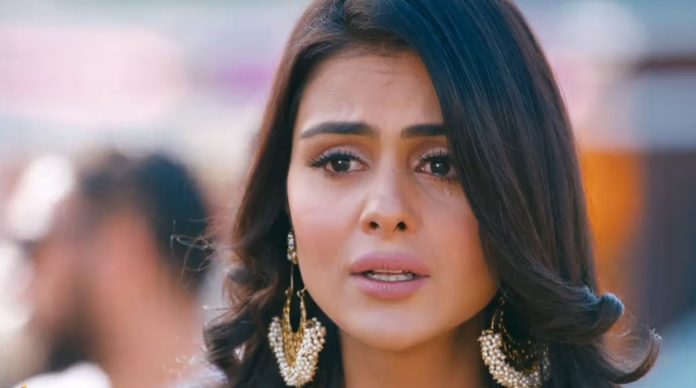 Udaariyaan 31st December 2021 Written Update Angad slaps Tejo Fateh and Jasmin’s togetherness hurts Tejo even more. She can’t believe that Fateh has decided to not talk to her and walk away. She returns to Angad’s house with Riya. Angad is relieved that Fateh didn’t tell the fake marriage truth to Tejo. He fears that once Tejo knows the truth, then she will run back to her love Fateh. He thinks he should not delay much and propose Tejo for marriage. Fateh doesn’t know what will he tell Angad, who loves Tejo so much. He thinks Angad will keep Tejo really happy. Fateh is in two minds. Angad tries to flirt with Tejo first and hints her what’s on his mind. He proposes her for marriage.

Angad gets close to Tejo and makes her uncomfortable. He is mad for her. Tejo gets away from Angad and his love, because she doesn’t love him. She tells him that she has no feelings for him. She apologizes that she isn’t the girl who would love her. She packs her bags to leave the house, when she sees her stay giving false hopes to Angad. He refuses to let her go. He asks her to stop and not leave him. He holds her arms and asks her to listen to him. Tejo tells that he is hurting her in anger. He tells that she is hurting his heart by refusing to his love. He angrily slaps her and shows his crazy side.

Earlier in the show, Jasmin tells Tejo that they didn’t visit their families, who never love or respect them. She tells that she is very happy with Fateh, she just wants to be with him all the time. She tries making Tejo jealous by the romantic talks. Angad reaches the fair and finds Fateh and Jasmin’s new drama going on. He wonders what’s happening when Fateh didn’t marry Jasmin. Tejo returns the wallet to him. Fateh wants to take Jasmin away from Tejo. Tejo cries seeing him leave with Jasmin. Angad is relieved that Fateh didn’t tell anything to Tejo. Angad will be showing his real side of a psycho lover soon. Keep reading.

Angad meets Tejo. He tells Tejo that he wanted to see Riya. He adds that he has seen Fateh and Jasmin with Tejo. He asks Tejo what did they tell her, did they try to trouble her. He asks her why did they come back. Tejo tells him that Fateh has come for some work and would go back to Canada with Jasmin soon. Tejo tells that she isn’t troubled, but Angad is really troubled and scared that Fateh has come in front of Tejo. He gets worried that Fateh’s truth may come out soon, and then Tejo will go back to him.

Angad decides to confess his love and propose her soon. Angad takes Tejo to the Gurudwara to propose her. On the other hand, Jasmin tells Fateh that she was just helping him when he had been caught by Tejo. She reminds that he wanted to stay away from Tejo. She tells that he might be wanting to return in Tejo’s life. Fateh asks her tp stay away from Tejo. He warns her to not do anything. She just wants to ruin Fateh and Tejo’s lives and happiness to take her revenge.

Angad, Tejo and Fateh are stuck in the love triangle. Fateh and Tejo love each other, but Angad wants to break them apart. Angad tries to impress Tejo. They head to the Gurudwara after preparing the halwa. He tells that he is really happy. Fateh also comes there to pray for Tejo. Angad wishes to get Tejo in his life, while she is still thinking of Fateh and praying for his well-being and happiness. Fateh wants to protect Tejo. Angad proposes Tejo for marriage and leaves her shocked. Tejo doesn’t answer him anything. Fateh misses to see them. Angad tries to convince Tejo. Tejo refuses to his proposal. She tells that she can’t love him, she doesn’t want any relation.

Angad tries hard to tell her that she also needs a family. Fateh finds them outside the Gurudwara. He goes to hear Angad and Tejo’s conversation. He is shocked to learn that Angad and Tejo’s engagement was fake. He is more shocked when he hears Tejo’s confession of love for him. Fateh cries on hearing about her immense true love that’s just for him. Tejo refuses to marry Angad. She tells him that she will not marry Angad when she loves Fateh. Fateh never expected that Tejo loves him and that’s why she didn’t move on in her life. Angad is shocked too to hear a long speech of love from her that’s just for Fateh. Angad can’t tolerate that she loves Tejo. What will Angad do now? Keep reading.

Reviewed Rating for Udaariyaan 31st December 2021 Written Update Angad slaps Tejo: 2/5 This rating is solely based on the opinion of the writer. You may post your own take on the show in the comment section below.