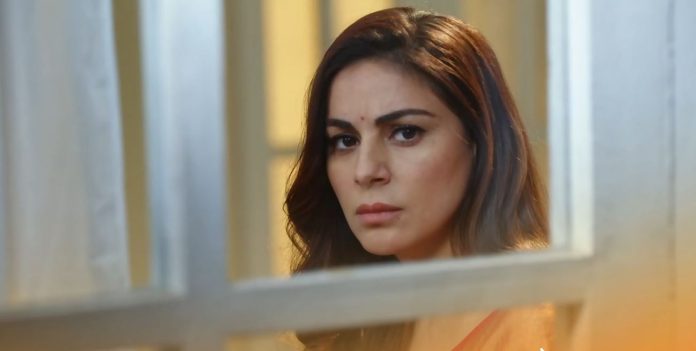 Kundali Bhagya 3rd January 2022 Written Update Alert twist Prithvi tells Sherlyn that he has to snatch all the powers from Preeta before it gets too late. He adds that he will also treat Preeta badly like he treats the Luthras and keeps them in control. Sherlyn is happy to see him so against Preeta. Preeta tells that she will do what he wants. She wants to rule in the house in her way. She wants the family to be treated as she wants. She tells that she will not let Prithvi win at any cost.

She comes across Sherlyn and Natasha, and gets to hear their conversation. Natasha tells that she felt like Preeta came to take revenge on Prithvi, but her motive seem something else. Sherlyn also doubts Preeta’s intentions seeing Preeta is calm and not taking any revenge on Prithvi. Preeta doesn’t want them to doubt her, and thinks to trouble Prithvi. What will Preeta do now? Keep reading.

Earlier in the show, Preeta meets Mahesh. She asks Mahesh to open eyes and see her, she has come on his call. She thinks why is Mahesh chained, how can Prithvi treat Mahesh like animals. She feels sorry that she got late in coming home and rescuing Mahesh. She tells that she will free Mahesh soon and take him to the outside world to make him lead a good life with pride and power. She promises to save Mahesh, return his lost name and fame, respect and rights. She wants to take care of Mahesh.

Nurse finds the door locked from outside. She shouts to alert Prithvi. Preeta doesn’t want the nurse to make noise and call the family. Nurse calls Prithvi and informs that something is wrong, someone has locked her in the room. Preeta tries to leave, but hides on seeing Prithvi come there. He opens the door. He asks the nurse to let him check the basement. He decides to snatch the powers from Preeta and ill-treat her.

Preeta hides from Prithvi, while he locks Mahesh’s room. He asks the nurse who locked the room from outside. She tells that someone might have come, she was preparing to sleep at that time. He scolds her for the carelessness. He tells that he will not tolerate such careless behavior next time. He adds that Mahesh can get violent and attack anyone. Preeta thinks if this is really true about Mahesh. She doesn’t want Prithvi to see her and understand that she is the old Preeta who wants to save the family. She makes a leave secretly. Sherlyn hears Prithvi shouting. She asks the reason.

He wonders who had locked the nurse in the room. She tells that Rakhi would have done this, because the nurse had hurt her. He tells that they have to shut up the family’s mouth before they go against him. He summons the family to rebuke them. He tells them that he didn’t send Mahesh to the mental asylum, he thought to get Mahesh treated in the house, Mahesh stays in control because of the nurse’s efforts, he is scared of the whip. He threatens them. He asks Rakhi if she has gone to the basement again. Preeta asks Prithvi why is everyone awake and disturbing her.

She commands them to sleep, else she will throw them out of the house. Prithvi asks Preeta if she had gone to the basement. She denies it. She saves everyone from his wrath by sending them to their rooms. Prithvi tells Sherlyn that he is feeling strange, like Preeta is bluffing, the papers are fake. Sherlyn tells that she has checked the papers and know that the legal papers were valid. He tells that she isn’t a lawyer to judge the papers so surely. He adds that Preeta is lying to rule over the house. He doesn’t tolerate Preeta, who has become a big hurdle for her.

Preeta tells that she has no option right now than talking to the family rudely. She wants strength to help Mahesh and make him return to normalcy. Sherlyn tells that Preeta stopped Prithvi from ruling over the Luthras. She adds that Preeta is hiding something, she had gone to meet Mahesh. Prithvi tells that Preeta has come to snatch Mahesh’s richness and take her revenge on Luthras. Preeta tells that Mahesh has called her to get her help against the devil Prithvi.

She knows that Mahesh is mentally fine, he had recognized her and called her Preeta. He tells that he will not get affected by Preeta’s return, he will snatch her powers and stop her from ruling, he will insult her and ill treat her just like he does with Luthras. He is ready to do anything to ruin Preeta. Preeta is ready to oppose Prithvi. She has her own plans to look after Luthras, keeping Prithvi in an illusion. Bani and Kareena are troubled seeing Preeta back in the house. They feel much bad. Kareena tells that she can’t stand Preeta, she will prefer Prithvi over Preeta. She calls Preeta a cunning woman.

Bani cries for Mahesh. Kareena asks Mahesh to sleep. Preeta gets a nightmare about Mahesh. She worries for Mahesh. She goes out to get some water. She finds Natasha and Sherlyn talking. Natasha plans to woo Karan. Sherlyn asks her to trap Karan as soon as possible. Natasha tells that Preeta would have come to take revenge on Prithvi. Sherlyn tells that Preeta and Luthras should take revenge on him, but Preeta is just playing safe. She thinks she is roaming around like a sweet lady, when she had tolerated much injustice from Luthras. She tells that she is able to see what Preeta is hiding from them.

Natasha tells that Preeta might throw them out of the house. Sherlyn is scared that Preeta will make them servants and torture them. Preeta goes away. Sherlyn sees the curtains moving. She goes to check who was outside. Preeta thinks she would have thrown out the family to take revenge, according to Sherlyn. But she is good hearted to value the family first. She wants to handle the situation calmly. She tells that she will try to unite the family.

Reviewed Rating for Kundali Bhagya 3rd January 2022 Written Update Alert twist: 4/5 This rating is solely based on the opinion of the writer. You may post your own take on the show in the comment section below.