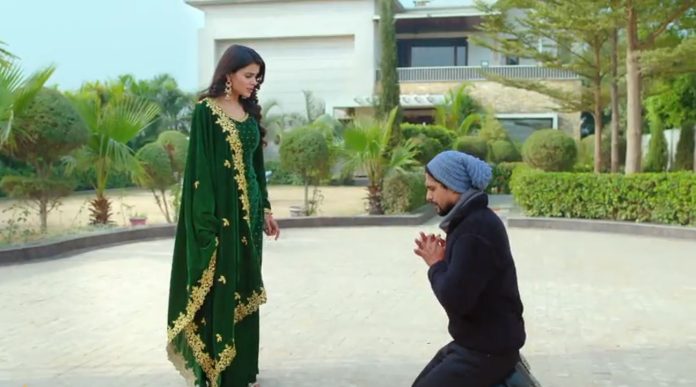 Udaariyaan 2nd January 2022 Written Update Tejo’s decision Fateh apologizes to Tejo for hiding such a big truth from her. He tells her that he has done too wrong with her by keeping this secret, but he just wanted her to move on with Angad, when he saw her really happy with the latter. He tells her that he wishes the best for her, that’s why he chose to go away from her life. Fateh confesses that he loves Tejo, that’s why he has come back with courage to tell her the truth. Tejo is moved on knowing that Fateh didn’t marry Jasmin. Fateh tells her that he had told the entire truth to Angad as well when they met at Sharma’s house. She can’t believe this either. She asks him did Angad know the entire truth.

Fateh replies with a yes. Tejo is shocked realizing the big deceive from her friend. She didn’t expect Angad to hide Fateh’s truth from her and snatch her rights of decision making. She feels Angad should have told her the truth and let her decide everything. She feels cheated once again in a relationship. She decides to not forgive Angad. Angad returns home and finds Tejo missing. He asks Babli about Tejo. Babli and Riya inform him that Tejo left the house. Angad is left in shock. Tejo’s decision will bring a chance in many relationships.

Tejo tells Fateh that neither Fateh nor Angad will decide for her life. She declares that just she will be deciding for her life. Fateh wants to give freedom to Tejo to decide, while he attempts to win her heart. Angad gets villainous and plans to get Fateh killed. Will Angad’s negative side help Tejo in choosing her hero Fateh? Keep reading.

Fateh and Jasmin’s sudden appearance in the house shock Tejo. Tejo can’t believe the truth that Fateh didn’t marry Jasmin, and faked everything just to take his revenge. Jasmin tells Tejo that Fateh has ruined her life and burnt her passport. Fateh justifies his actions saying he couldn’t marry Jasmin after she fell in his sight, after her learnt her truth and hated her. He adds that Jasmin has brought Jass into their lives to trouble Tejo, that truth changed his love into hatred. He tells Tejo that he doesn’t have any feelings for Jasmin now. Tejo is shell shocked when she finds both of them arguing and blaming each other. She tells that she doesn’t want to hear any nonsense from Jasmin.

She gets fed up of Jasmin, who tortures their ears more by cursing them. She tells that she will take revenge and ruin their lives. She doesn’t want to spare them. She tells that she will not let them unite. She asks Tejo if she is really happy to know that Fateh is still single. She starts yelling at Tejo. Fateh warns Jasmin to be away from Tejo’s life and throws her out of the house. Fateh tells that he will always protect Tejo. Tejo still wants answers from Fateh. Fateh stays back to apologize to Tejo and also confess his love. He tells Tejo that Angad knew everything about his stay in Rampur.

Fateh tells Tejo that Jasmin has hurt Tejo a lot, but he failed to realize this in time. He wishes he had seen her truth in time. He apologizes to her. She asks him if he is expecting her to forgive him. She tells that she will never forgive him, because he ruined her sacrifice when she stepped back to unite him with Jasmin. She tells him that he didn’t go back home and had hurt his family as well. He replies that he had run away from everyone he had wronged for his repentance. She tells that running away doesn’t mean repentance, he should have faced it.

He tells her that he had tried to keep himself away from her and avoided her every time he saw her, but he had to come out in open to save her from Jasmin’s evil plans. She realized that her heart was right when she felt his presence around. She loves him a lot, but doesn’t want to forgive him. Fateh tells about his struggles. He also reveals that he had saved her in the market riots. He adds that he is getting punished for his sins, he didn’t wish to come to her with the truth, but now he got to know that she loves him, she doesn’t love Angad. He asks her why did she fake the engagement with Angad.

She tells that she just wanted everyone’s sacrifice. He tells that he is a fool to not understand their love, her goodness and sacrifices. He tells that the time they spent was really true, and he misses those moments still. He confesses that he loves her, he would have gone away if she was really happy with Angad. He tells that he wouldn’t have come as Angad wanted, but just thought to clear the misunderstandings. He doesn’t want her to stay mistaken and take her life’s importance decision. She is shocked to know that Angad knew everything about Fateh. She gets upset when he tells that Angad loves her and did right thing. She clears that Angad and Fateh can’t be right always, they can’t decide it for her, she is capable enough to decide for herself.

Tejo goes to confront Angad, where she tells that only she will decide for her life. She scolds him for hiding about Fateh, who had been struggling a lot till now. Angad tells that he didn’t want Fateh to hurt her, Fateh isn’t trustworthy. She replies that she will decide about Fateh. He understands that she just loves Fateh, not him. He receives a shock knowing she left his house. He gets mad at her. Tejo arrives home to meet her family who are already waiting for her on Lodhi festival. Khushbeer and family have no idea about Fateh. They think of meeting Tejo during the festive. Jasmin swears revenge on Fateh and Tejo.

Reviewed Rating for Udaariyaan 2nd January 2022 Written Update Tejo’s decision: 5/5 This rating is solely based on the opinion of the writer. You may post your own take on the show in the comment section below.