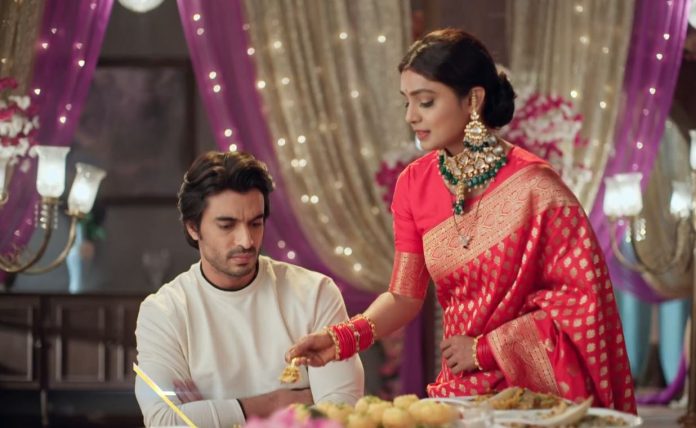 Imlie 3rd January 2022 Written Update Jealousy at peak Aryan asks Imlie if everything got loaded in the car? Imlie replies yes. Malini comes there with a suitcase and asks Imlie to take it with her. She says Aditya gave the entire space in his cupboard to her. Malini tells Imlie that she and her stuff will have to get out of Aditya’s cupboard now. She gifts the suitcase to lmlie asking her not to roam around with her stupid potli. Imlie asks Malini why she always thinks about her. She further asks Malini, will she think about her only, on her wedding night too.

Imlie asks Malini why is she bringing her suitcase to her? Isn’t her husband waiting for her? Malini gives a piece of her kalira to Imlie saying that it’s her duty as an elder sister to give it to her. She further tells Imlie that it is said that a girl who gets a piece of bride’s kalira gets a life partner soon. Malini tells Imlie that she must be in need of a life partner as she is alone. She also asks Imlie if she has already found someone else and looks at Aryan. Imlie tells Malini that she would already told her whom she like if the former would have really considered her her elder sister. She tells Malini that she acts like an enemy instead of an elder sister.

Imlie says she makes relationships instead of breaking them. She tells Malini that she only has the bad habit of breaking relationships. Malini tells Imlie that it’s a good strategy by her to interfere in her and Aditya’s life. Imlie asks Malinin if she is afraid? She also asks Malini if her fortress of misunderstandings is so weak? Malini stands smirking. Aditya comes and Imlie recalls him filling Malini’s hairline. Imlie asks Malini to go inside as her husband himself came to take her. She asks Malini to keep in mind that she has no interest in interfering in someone’s relationship. Imlie blames Malini for ruining her marriage. She tells Malini that only she knows if her marriage is having something happy or not.

Imlie returns to Rathore house. Narmada says to her children that all of them need to take care of Imlie. Imlie cries, Narmada and Arpita run to ask if her stomach is hurting? Imlie says she is feeling hungry. This surprises Rathores. Imlie says she will make yummy food for everyone. She leaves to cook food. Narmada and Arpita ask Aryan to go and help Imlie in the kitchen. Aryan argues with them. Arpita tells Aryan that Imlie is upset because of him and thus he has to help her. On Narmada and Arpita’s order, Aryan goes to help Imlie. He gets surprised and shocked to see Imlie singing, jumping and cooking. Aryan asks Imlie if she is fine? Imlie asks why is he asking all this? Aryan asks Imlie why she is getting so free with him? Imlie calls Aryan ABP (Ajeeb Bickat Praani).

She tells Aryan that he can change bickat to bhulakkad as he forgets many things. Imlie asks Aryan to cut onion saying she will teach him how to cook food. Aryan tries to confirm from Imlie if she is fine? Imlie talks many things about here and there. At last she says no one is at fault and no one is responsible. Imlie says she doesn’t want to blame or hold anyone responsible in her life. She says that now she will do everything on her own. Aryan cries and Imlie notices it. Imlie asks Aryan if he is crying due to her sad story. Aryan says he is crying due to the onion. Imlie jokes that onions made bitter gourd cry. She calls Aryan a bitter gourd. Aryan tells Imlie that sometimes words become more bitter than the food and doesn’t leave a person’s mind.

Imlie asks Aryan to speak straightforwardly. Aryan asks Imlie to not be dramatic and tells if she is really fine? Imlie says she even took drama seriously. She recalls and says that first her villagers forcefully got her married to Aditya and she started fulfilling its responsibilities. Secondly, she started considering step sister Malini as her real sister. Thirdly, she fell in love. At last everything got over. Imlie says she realizes that she is not at fault anywhere in all this. She says he tries a lot to save her relationship but got defeated. Imlie says she didn’t break down. Imlie wipes her tears and says she is just hungry right now.

Narmada and Arpita praise Imlie’s hand made food. Imlie offers to serve Aryan but he refuses saying he doesn’t eat carbs after 8 pm. Arpita and Narmada asks Imlie to let Aryan eat his diet food and instead eat with them. Alone, Aryan tastes the food made by Imlie. He feels he could learn to forget his pain like Imlie. Aryan thinks his pain can’t get finished till he takes revenge from Aditya and destroys him fully. Next morning, all decked up Malini, greets Rupi and Sundar. She asks Sundar to get the ring ritual thali ready for her. Rupi asks Malini how many times she is going to repeat rituals. Malini calls Rupi jealous of her marriage. She taunts Rupi of being unmarried/divorced till now. Rupi too taunts Malini for preparing for her ritual alone.

She tells Malini that she will never be able to take Imlie’s place in Aditya’s life. Malini says she doesn’t want Imlie’s place but her own place in Aditya’s place. She says she wants her rights back and leaves saying that only she has a place in Aditya’s life. Malini tells Anu that no one is on her side in the Tripathi family. She also tells Anu that even Aditya asked her for some time. Anu advises Malini to make Imlie push Aditya towards her instead of pulling him herself. Malini says Imlie cursed her instead of blessing her. Anu advises Malini to hurt Aditya by showing him how Imlie is happy with Aryan. She says only then she can go closer to Aditya by healing his wounds.

Malini reaches Bhaskar Times office and doesn’t let anyone call Imlie as Mrs. Tripathi. She declares that only she is Mrs. Tripathi here. Imlie asks Malini can’t she live without her for even a day? Other staff leave. Malini invites Aryan and Imlie for dinner and her chulha-chadhai rasam. She tells Aryan that their professional relationship will not end till they publish her and Aditya’s marriage in their newspaper. She says she and Aditya will decide what pictures are to be published. Aryan tells Malini that Bhaskar Times charged fees for covering her marriage, not post marriage rituals. He asks Malini for 50 lakhs to cover her post marriage rituals. Malini finalizes the deal. She leaves telling Imlie that she and Aditya will wait for her.

Aryan tells Imlie that he took decision for the profit of Bhaskar times. In the next episode, Malini will feed Aditya with her hands to make Imlie jealous. Aditya will ask Imlie to have something. Imlie will continuously eat green chillies. Aryan will stop her.

Reviewed Rating for Imlie 3rd January 2022 Written Update Jealousy at peak: 3/5 This rating is solely based on the opinion of the writer. You may post your own take on the show in the comment section below.