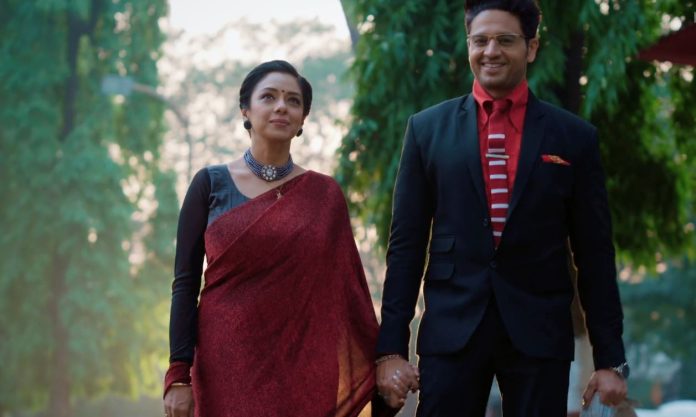 Anupama 5th January 2022 Written Update Confessions Anupama and Anuj walk side by side. Anuj feels happy seeing Anupama happy like a kid. “Gazab Ka Hai Din, Socho Zaraa” plays in the background. A baba gives them his blessings on the way. Anuj holds Anupama’s hand making her shy and awestruck. Anuj explains to Anupama that he doesn’t know why he held her hand suddenly. He tells her that he doesn’t feel like leaving her hand now. Anuj asks Anupama if he can walk holding her hand. Anupama tightens her grip on Anuj’s hand and walks with a smile. This makes Anuj happy. Both of them look like a happy romantic couple walking hand in hand.

At Shah house, Kavya gets angry at Malvika for hugging Vanraj. Malvika shows Kavya her old picture of hugging Vanraj, when he was married to Anupama. She tells Kavya that not everyone is PC (Pati Chor) like her. This angers Kavya more. Malvika tells Kavya that till now nothing is like what she is thinking of. Kavya asks Malvika if it means something can happen in future? Malvika advises not to get angry as it fastens the aging process. Kavya blames Malvika for her dark circles. Malvika asks Kavya to join the office as she didn’t do MBA for sitting at home. Kavya gets surprised and asks Malvika if she will give her a job too like she gave to Paritosh.

Malvika replies yes and says they need more workforce for their start up. But Vanraj refuses from behind. Malvika tells Kavya that she can’t deny her business partner’s wish and apologizes to Kavya. She leaves asking Kavya to try convincing Vanraj if she can. Kavya asks Vanraj what problem he has with her job? Vanraj tells Kavya that he has a problem with her working in his company, not other companies. Kavya asks why? Vanraj tells Kavya that she will work less and spy on him more like she does in house. Kavya tells Vanraj that she needs a job. Vanraj asks her to find a job somewhere else. He reminds Kavya that she also used to say the same thing when he was jobless.

Vanraj asks Kavya to either search for a job or handle the cafe or anything she likes to do. He further asks her to stay away from his company and his work. On the other hand, Anupama thinks to complete office work before the new year holidays. Anuj comes and helps Anupama fix her saree pleats. He tells Anupama that his mother used to make him do this when his father used to go busy watching matches. Anuj says at that time, he thought his father was very unromantic. He tells Anupama that he would have left India- Pakistan’s match to fix her saree pleats, if she would have been Malvika’s sister in law. This makes Anupama awestruck and nervous. Anupama asks Anuj to have his medicines and also reminds him to take doctor’s appointment for himself.

Anupama runs away, shying, leaving Anuj confused. GK praises Anuj for confessing his feelings to Anupama in a unique way. He reminds Anuj that he told Anupama that he could leave India-Pakistan’s match to fix her saree pleats, if she would have been Malvika’s sister in law. Anuj gets shocked and asks GK if he really said this to Anupama. He says he thought he was imagining saying all this to Anupama. GK tells Anuj that it wasn’t his imagination as he really said it and Anupama heard it for real. Anuj gets scared of his actions. GK congratulates Anuj for stepping on the second stair of love. He explains to Anuj that the second stair is the phase between love and confession.

GK further explains to Anuj that in this phase lovers get so comfortable with each other that they say anything without thinking or being scared. Anuj asks GK if Anupama would have felt bad due to his words and gotten angry with him. GK asks Anuj to convince her if this happens. He tells Anuj that Anupama is not angry as otherwise she would have beaten him on his sister in law conversation only. Anuj gets surprised hearing this. He recalls his last moments and conversations with Anupama. Anun feels scared thinking what he did as Anupama considers him as a friend only. On the other hand, Anupama feels happy thinking that after her kids, Anuj fixed her saree pleats. GK goes and asks Anupama to tell him truly if she loves Anuj.

He takes Anupama to confess her feelings to Anuj but fails to find Anuj at home. Anupama stops GK from making her confess to Anuj. She tells GK that she has some reasons that she isn’t confessing her feelings to Anuj now. GK goes wondering about Anupama’s reasons. Whole Shah family wonders what happened that Baa allowed Malvika to sit on her swing and is giving her swings. They get more shocked when Baa asks Malvika how she liked the breakfast. Baa tells Malvika that she made tiffin for her. Malvika calls Baa her best friend forever. Baa praises Malvika for cleaning the house with Vanraj. Malvika tells Baa that she is good at almost everything. Baa tells Malvika that she is their guest and can’t make her do work.

Kavya sees the lovey-dovey state of Baa and Malvika. She thinks Baa is pampering Malvika after knowing that not Anuj but Malvika is the real owner of the Kapadia empire. Kavya further thinks that Baa accepts her son’s friends easily but not daughter in law’s friends. She feels scared that Malvika could soon take her place. Kavya thinks about using her trump card now. On the other hand, Anupama tells GK that she isn’t confessing her love to Anuj because first she wants to sort out misunderstandings between Anuj and Malvika and improve their brother-sister bond. She says that only after improving Malvika and Anuj’s bond, she could go ahead with her relationship with Anuj. GK asks Anupama, what about her feelings.

Anupama says she can too wait for Anuj like he waited 26 years for her. GK asks Anupama why she and Anuj think of others before themselves. He asks her to be selfish sometimes. Anupama says Malvika is like her sister too and her happiness is also her (Anupama’s) responsibility. She tells GK that she will too fulfill the responsibilities of her love just like Anuj. Anupama says she wants Malvika to accept her wholeheartedly for Anuj’s happiness. GK takes a promise from Anupama that she won’t wait to confess her feelings to Anuj if the situation goes opposite according to their thoughts. He tells Anupama that he doesn’t want her and Anuj to wait a long time for each other.

Anupama promises GK. From a distance Anuj wonders what GK and Anupama were talking about. GK leaves and Anuj asks Anupama if everything is fine? Anupama says yes. Anuj stutters and asks if GK said something stupid like Malvika. Anupama calls Anuj, “Bholu Ram”. She reminds Anuj that they have to go to Shah house before office to talk to Malvika about returning home. She leaves laughing and calls Anuj, “Bholu Ram”. Anuj wonders what is happening?

In the next episode, an angry Malvika will tell Anupama that she doesn’t celebrate New Year and Anuj knows about it. Kavya will decide to win Vanraj back this New Year. At office, Vanraj will ask Malvika to not worry as he prepared the complete presentation. He will get shocked and angry when Malvika says that Anuj will present the project Vanraj worked hard on. Anupama will notice Vanraj’s anger and impatience behind his smile in the meeting.

Reviewed Rating for Anupama 5th January 2022 Written Update Confessions: 4/5 This rating is solely based on the opinion of the writer. You may post your own take on the show in the comment section below.