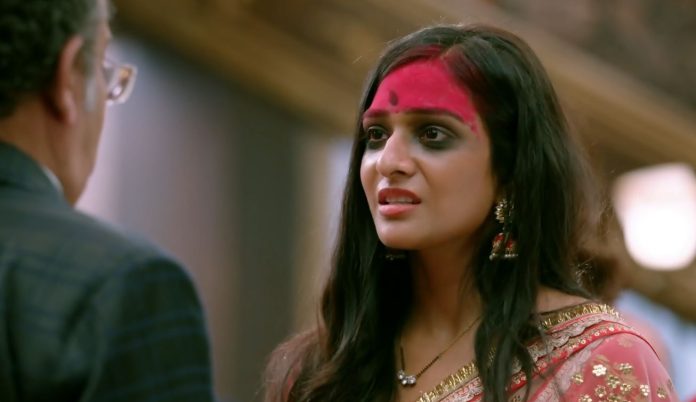 Bhagya Lakshmi 6th January 2022 Written Update Lakshmi walks out Lakshmi comes home in the shattered state. She breaks down. The family is shocked to see her kumkum avatar. They run to ask her what happened, as if they aren’t aware of anything. Lakshmi gets disheartened seeing their fake concern. She recalls what Malishka said, that Rishi’s family knew about Malishka and Rishi’s love affair. She feels cheated by the family as well. Karishma, Dadi, Neelam and everyone ask Lakshmi to stop for once and talk to them. Karishma doesn’t stop for anyone. Lakshmi goes straight to her room and packs her bag.

The family gets worried that Lakshmi didn’t stop on Neelam’s call also. Virender and Ayush arrive home and see Lakshmi’s estranged behavior. They are shocked to see Lakshmi so pale faced and weeping. Virender realizes that Rishi has snatched Lakshmi’s hopes and dreams by tarnishing her loving heart. Lakshmi doesn’t think she is answerable to anyone, but Virender. She gets downstairs with her bag, while the entire family tries to stop her.

She goes to Virender and tells him that she broke the relationship of marriage with Rishi in the Durga temple by making Matarani a witness. She doesn’t think she needs to justify or clarify her decision to them. Virender supports Lakshmi’s decision. He wants to punish Rishi for breaking her heart. Neelam asks Lakshmi to not leave Rishi. Lakshmi doesn’t listen to Neelam and makes a leave from the house. Neelam gets worried for her son’s life. Will Lakshmi leave from Rishi’s life? Will a new menace begin for Rishi? Keep reading.

Lakshmi tells Rishi that she thought her fate is the best, but she didn’t know that Rishi is a fraud, he is just an illusion. Malishka asks Lakshmi to give her a chance to explain. Rishi asks her to stop it. Malishka tells that she can understand Lakshmi’s feelings, she is feeling rejected, but that’s not true. She tells that Rishi didn’t cheat Lakshmi, the truth is she isn’t his first choice. She reveals that Rishi loves her/Malishka, she is his first choice, his first love. Lakshmi asks Rishi did he love Malishka. She tells that she was blaming herself for his cheat.

She feels more terrible that she came between two lovers. She asks Rishi if he was in love with Malishka. Rishi apologizes to Lakshmi. She tells that its too late to apologize. She asks him why did he marry her when he loved Malishka. She asks why didn’t he tell her once that he loves Malishka, he should have told her and also his family, if they had pressurized him. Malishka tells that his family knew everything about their relation. She asks him if they really knew it. She takes Rishi to Mata rani and asks him to say the truth, if the family knew about Malishka and his love.

Malishka falls down and gets hurt. Lakshmi questions Rishi to know if his family knew the truth. She asks him not to lie. Rishi’s silence hurts her. She realizes that even his family cheated her. She recalls the time when she was fooled by Rishi’s family. She feels broken down. She tells Matarani that her husband and in-laws cheated her. She didn’t expect her husband to marry someone else, by forgetting their marriage. She remembers that Rishi didn’t wish to keep their marriage.

Lakshmi asks Rishi if he was waiting to break her heart this way. She tells that she will not stop him if he wants to break their relation. She swears on Matarani and breaks her marriage with Rishi. Rishi is left in shock. Virender and Ayush come home and ask the family about Lakshmi. They learn that Lakshmi is found, Rishi has gone to get her home. Virender gets delighted with this news. He also sits to attend the puja that Neelam kept for Lakshmi. Lakshmi tells Rishi that their relation is over, he has made fun of their marriage, her emotions and love.

She had regarded Rishi as her dad’s blessings, but its not the truth, he isn’t a good life partner for her. She makes him sink in guilt. She tells that he has snatched everything from her. Rishi tells that he tried to tell her the truth, but didn’t wish to hurt her. She asks him why didn’t he tell her the truth before the marriage. She tells him that he proved that he isn’t trustworthy when she loved him a lot. She reprimands him that he can never understand her. She tells that she told him many times that he has returned everything to her which she lost, she got all her relations because of him, but he proved her wrong.

She calls it enough. She tells that she is breaking her relation with him, and that’s final. She remembers telling Rishi the importance of mangalsutra. She has no faith in it now. She holds the mangalsutra. Malishka asks her to listen. Lakshmi tells that everything she tells her will appear a lie now. She rebukes Malishka. She feels she never questioned Rishi and Malishka. Malishka asks her to not get upset, stop crying and think positive that she got to know the entire truth. Lakshmi calls her daring to stay stern after cheating her.

She asks Malishka not to change her perception, this truth revelation isn’t good, she should have known this truth before the marriage. She tells that she can’t take this positively. She asks Malishka not to lie and apologize. She blames Malishka for ruining her life. She tells that Malishka will never get forgiven. She asks Rishi to never take her name from now. She leaves. Rishi follows her. He misses to find her. He tries to look for her. Malishka tells Rishi that things are still on their side. He asks her not to be insensitive. He feels he has done wrong with Lakshmi.

Reviewed Rating for Bhagya Lakshmi 6th January 2022 Written Update Lakshmi walks out: 4/5 This rating is solely based on the opinion of the writer. You may post your own take on the show in the comment section below.