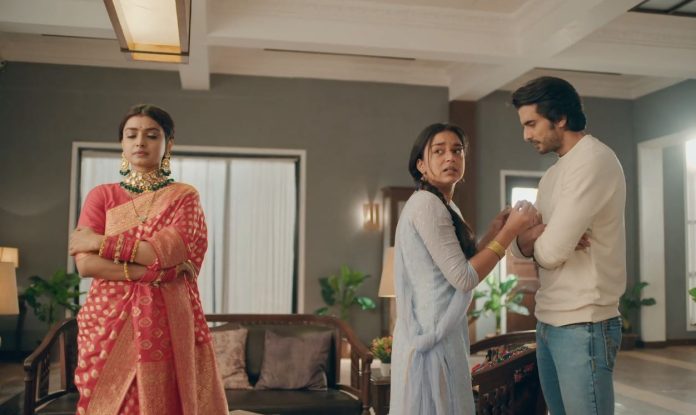 Imlie 5th January 2022 Written Update Adamant Aditya Aditya asks Imlie that she started loving Aryan to such an extent that she can’t stay with him (Aditya) for even 5 minutes. Imlie tells Aditya that she neither learnt to love Aryan nor learnt to hate him (Aditya). She says she learnt to respect herself. Imlie tells Aditya that she can’t stay alone with him for even a second if he can’t respect her and wants to hurl the same accusations on her again and again. She reminds Aditya that he is someone’s husband, so what is he doing with her?

Imlie further tells Aditya that following a girl doesn’t suit him. Aditya asks Imlie if she is feeling jealous that he is someone else’s husband now. He asks her to think how he would have felt seeing her with Aryan. Flashback shows Aryan making wet Imlie his blazer. Angry Imlie asks Aditya to tell her what he saw? She asks Aditya if he saw her confessing love to Aryan and or Aryan touching her all over her body? She continues questioning Aditya what did he see? Imlie asks Aditya if he saw her hugging Aryan or both of them in bed together? She tells Aditya that nothing happened like that as it was only in her fate to see her husband sleeping with another woman.

Imlie reminds Aditya that she gave him a chance to explain himself even after she saw him sharing bed with Malini. She asks him even after all this he is questioning her character. Aditya tells Imlie that she went to Aryan in trouble instead of coming to him. Imlie reminds Aditya that she landed in trouble because of him. She continues reminding Aditya that he trusted Malini instead of her and indirectly forced her to leave the house. Aditya tells Imlie that her first article got published on the front page easily and quickly. Imlie feels shocked after understanding what Aditya is thinking about her. She tells Aditya that whatever she has achieved, has achieved on her merit not by spending night with anyone.

Imlie asks Aditya what he wants to say now after hearing all this? She asks Aditya did he realize that Malini created misunderstandings between them for her own happiness? Imlie asks Aditya to realize that Malini has changed and taken the wrong way. Malini asks Imlie when will she accept that she and Aditya broke up because of her (Imlie) not her (Malini)? Imkie looks at Aditya hopefully to trust her. Malini says to Aditya and Imlie that she didn’t make them sign divorce papers at gunpoint. Imlie asks Malini how can she blame her for everything after making her husband against her?

She tells Malini that her tears won’t carry on her drama any more. Imlie angers Malini by telling her that doesn’t love Aditya but wants to keep him in her control. Malini asks Imlie to shut down. She says she just wants Aditya’s happiness and thus is accepting her mistake. Malini tells Imlie it is her who cheated on Aditya. She tells Imlie that she got a new car, new crush and new job and Aditya is just left with her memories. She asks Imlie is it fair that she left Aditya as he asked her just one question. Malini tells Imlie that she didn’t see Aditya’s breakdown, understood him or wiped his tears. She questions Imlie’s love for Aditya.

Malini tells Imlie that true love is what she feels for Aditya. She says that she has loved Aditya for almost 10 years. Malini tells Imlie that her one year relationship is nothing in front of her love for Aditya. She asks Imlie to not dare question her love for Aditya. Aditya looks shocked. Imlie looks towards Aditya. Malini asks Imlie to not dare call her love selfish. She asks Aditya if she asked him to marry her? Malini reminds Aditya that he himself announced their marriage without even asking her. She tells Aditya that she understood that he took the decision of marrying her to fulfill his responsibility. Malini further tells that she decided to marry him so that their unborn child could get his name.

She asks Aditya why she would marry him knowing that he would never love her. Malini tells Imlie that she knows that she possesses a lot of virtues. She tells Imlie that she is very interesting and strong. Malini says she (Malini) is weak and boring. She tells Imlie that she is way better in loving Aditya, than her. Malini says she has loved just Aditya and will never notice anyone else even if 100 Aryan’s come in front of her too. She says her love may be one-sided but it is true, pure and permanent. Imlie laughs at Malini’s pretense. She says that Malini has built a castle of love on the foundation of lies!

Imlie asks Aditya if he still trusts Malini? Aditya remains silent. Imlie urges him to answer her. Before Aditya could say anything, Aryan comes and asks Imlie to wrap up as they need to go to the office. This angers Aditya. Imlie asks Aryan to give her a minute. Aryan leaves and Imlie asks Aditya what was he saying? With teary eyes Aditya says he wasn’t saying anything. Shocked Imlie calls Aditya a big idiot for not saying anything after whatever happened. She tells Aditya that he is such an idiot that he will still trust Malini even after God will arrive on earth and beg him to not trust Malini. Imlie laughs on her own and Aditya’s situation.

She tells Aditya that he is darn lucky to have got a wife like Malini. Malini feels irritated. Imlie sarcastically says, “may God bless Aditya and Malini’s jodi”. Imlie’s behavior and state shocks Aditya and Malini. Aditya gets teary eyed seeing Imlie leaving. Malini smiles and smirks. At Rathore house Aryan praises sad Imlie for selecting a good layout. Imlie requests Aryan to tell her something surprising to stop her from crying. Aryan asks Imlie, is he supposed to do this or have time for this? Imlie requests Aryan to do this for friendship’s sake. Aryan tells Imlie that she is his employee not friend. He further tells Imlie that not she but he can ask her to do anything.

Aryan asks Imlie to not forget who he is? He tells Imlie about his achievements. Imlie laughs at Aryan when he tells her that he is a former runner up of Mr. India. She walks like a model and asks Aryan if he also walked like this when he was a model? Imlie walks, jumps and acts like a kid. “Shiddat Bana Lun Tujhe” plays in the background. Aryan smiles noticing Imlie laughing. He thinks Imlie’s mother’s trick actually works as Imlie’s tears stopped. Aryan further thinks Aditya broke the morale and heart of a young and innocent girl like Imlie. In his thoughts, Aryan asks Aditya to be ready to pay for his wrong doings. Aryan asks Imlie to work if she has laughed enough.

Aditya reaches Tripathi house and asks Imlie if he could talk to her for 5 minutes. Imlie asks Aditya why she should talk to him if he has nothing to say? Aryan orders Imlie to go and talk to Aditya as she has only 5 minutes for it. Aditya asks Imlie if she now needs Aryan’s permission to talk to him? Imlie tells Aditya that she is bored of his old taunts. Aditya tells Imlie to shut up. He tells Imlie that Malini did wrong but whatever she said was right. Aditya tells Imlie they signed the divorce papers by their own will and proved Malini’s wrong as right. He tells Imlie that they weren’t ready to accept that they have drifted apart from each other.

In the next episode, Imlie will ask Aditya how to make him believe that there is nothing between her and Aryan? Aditya will ask Imlie to leave Aryan. He will further ask Imlie to promise him that she will sever all her ties with Aryan. Imlie will ask Aditya, if he is asking her to live just as his wife leaving her work and identity? She will say “Goodbye” to Aditya asking him to live happily with his wife and child. Aditya will look on smiling.

Reviewed Rating for Imlie 5th January 2022 Written Update Adamant Aditya: 4/5 This rating is solely based on the opinion of the writer. You may post your own take on the show in the comment section below.