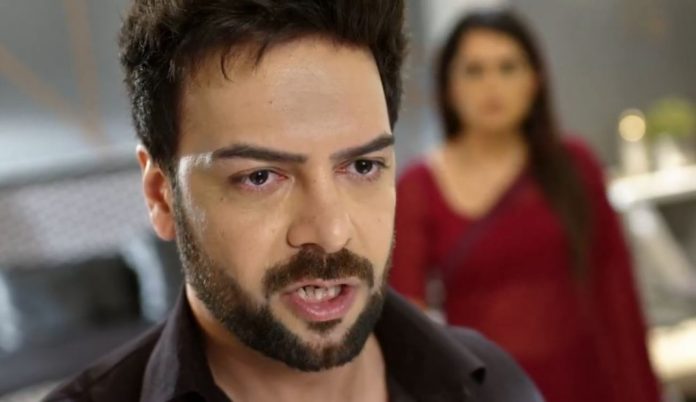 Kundali Bhagya 6th January 2022 Written Update Threatened Prithvi meets his financial advisor, who warns him against Preeta. The man tells him that Preeta is a powerful person now, Prithvi should not fight her, else he will be the only person at loss. He tells that Preeta has decided to get the Luthra empire on her name, she is in her power zone, she will throw out Prithvi and destroy him. Prithvi drinks to calm his mind. He decides to get Preeta out of his way some how. He proceeds with his backup plan, that’s to harm Mahesh and prove him insane in front of Preeta. What will Sherlyn and Prithvi plan against Preeta? Keep reading.

Earlier in the show, Karan returns to them. Kritika asks Karan did he tell Preeta that he doesn’t love her. Karan tells that he scolded Preeta a lot. Bani tells that Preeta didn’t shout. He tells that she was shouting and he had made her quiet. Natasha puts him into a fix. She asks him to scold Preeta in front of the family. Prithvi gives Mahesh’s new medicines to the nurse. He tells that its heavy dose. He asks her to just follow her instructions. He meets Sherlyn. He tells that he has got a higher dose for Mahesh this time to make her appear totally insane in front of Preeta. He adds that he isn’t scared of anyone, but is just changing his plans.

Preeta meets the family. She finds Rakhi caring for her. She doesn’t want to show her real emotions. She gets stern in her replies. She tells Rakhi that she had a good sleep at night. Rakhi asks Preeta to talk to them as she likes, but she will just talk to her with love. Preeta doesn’t want to get rude to Rakhi. She asks Rakhi to keep relations, but not expect any special treatment. Rakhi tells that she just wanted her Preeta, she got her back. She asks Preeta to take the food for Mahesh. She tells that Mahesh misses Preeta a lot, he was heartbroken.

Preeta tells that she will take the food for Mahesh, who has given her all the property and power. The family asks Karan to scold Preeta in front of them. He tells that he already scolded Preeta a lot, he doesn’t want to scold her more. Kritika asks him to keep Preeta in control. Karan tells that Preeta was crying when he scolded her. Bani tells that she wants to see Preeta crying. Karan tells that he has a big heart, he left Preeta alone when she was crying, he had pitied her. Bani and Kritika praise him that he had controlled Preeta. Mahesh gets scared and hides in the room. Preeta reaches him. She meets Mahesh.

She asks Mahesh to give her some time, she will make everything fine in his life. She feeds the food to him. Mahesh gets happy seeing her. The nurse comes there to beat him. Mahesh gets scared. Preeta stops Mona from torturing Mahesh. Sherlyn tells that Prithvi should have not called Naagre home. He tells that its the best time to call Naagre. She tells that Naagre is a crazy man. He tells that Naagre will check Preeta’s legal papers and verify it, he is a lawyer, but a criminal also. She tells that she knows everything that he could win over Luthras property by Naagre’s help.

He tells that he believes Naagre’s talents, he fights the cases of the criminals and wins also. He thinks just Naagre can answer Preeta. Naagre arrives at Luthra mansion. Preeta rebukes Mona for her evil. She asks Mona to just follow her orders. She wants Mona to treat Mahesh with love and never dare to hurt him again. She threatens Mona. Mahesh claps for Preeta. Preeta asks Mona not to tell anyone about their conversation. Later, Preeta meets Shrishti, who enquires about her stay in the Luthra mansion. She confesses that nobody is happy with her return, except Rakhi.

She tells about Mahesh’s condition. She adds that Prithvi is torturing the family a lot, but now she will show Prithvi his right place. Shrishti is afraid for Preeta. She asks about Karan. Preeta tells that Karan is okay, he lost confidence, but still shows attitude, he loves her. She doesn’t want to explain mistakes to anyone. She just wants Luthras to get saved from Prithvi. She tells that she will leave once she saves the family and restores their lost pride.

She didn’t forgive Karan. She doesn’t want to forgive him. Shrishti recalls her last meet with Sameer, when she defended Preeta. She regrets that he didn’t trust Preeta, and this led to their breakup. She tells Preeta that she isn’t talking to Sameer. Preeta asks the reason. Shrishti doesn’t want such people in her life who can’t take a stand for relations. Preeta cries knowing about Shrishti and Sameer’s breakup. Shrishti tells Preeta that she is always there for her. The sisters hug.

Reviewed Rating for Kundali Bhagya 6th January 2022 Written Update Dangerous Duo: 4/5 This rating is solely based on the opinion of the writer. You may post your own take on the show in the comment section below.