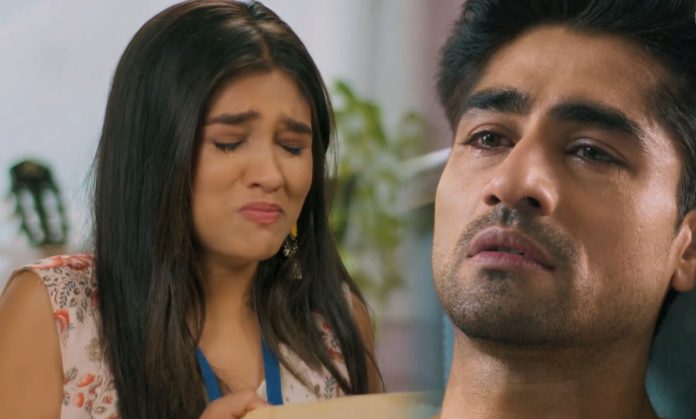 Yeh Rishta 6th January 2022 Written Update Estranged Abhi Manish takes a leave from the engagement party from Birlas. Anand says now they and Goenkas became relatives. He further says every ritual of marriage will bring both the families close. Anand praises Manish’s dance. Everyone laughs sincerely. Akhilesh asks Harshvardhan how their dance was. Harshvardhan says he enjoyed it a lot and hopes marriage happens this way only. Manish says he hopes everyone remains happy and smiling. He says he hopes these days come soon. Abhimanyu and Akshara give a look to each other.

Goenkas takes a leave. Mahima and Kairav notice Akshara and Abhimanyu giving each other a look. Neil notices it too. Kairav takes Akshara away. Aarohi says bye to Abhimanyu. Harshvardhan takes Aarohi aside and asks her to try to make sure that marriage goes smoothly too. Abhimanyu looks at his injured finger angrily. At night, angry Abhimanyu takes out the engagement ring that Aarohi made him wear. Both Abhimanyu and Akshara cry in pain of separation. They recall their past moments. An imaginary scene/dream shows people separating Abhimanyu and Akshara from getting closer to each other. They can be seen yearning for each other.

People make barriers between Abhimanyu and Akshara, which they cross to get together. They try again and again to cross the barriers but get separated at last. Imaginary scene ends. Kairav offers turmeric milk to nervous and hurt Akshara. He asks her what she is hiding again and asks her to drink the milk. Kairav tells Akshara that she can’t reduce other’s pain by being in pain herself. He explains to Akshara that being in pain herself won’t help Aarohi and Abhimanyu’s pain. Kairav further tells Akshara that this way she is increasing her own pain. Akshara gives Kairav a questioning look like a kid gives.

Angry Abhimanyu gulps the whole milk in one go and throws the glass, breaking it. Neil shows Abhimanyu the picture showing that he injured his finger himself. He asks Abhimanyu, what will happen by breaking his own hand. Neil asks Abhimanyu if wanted to break something, he should have broken his engagement with Aarohi. He further asks Abhimanyu why he is giving pain to himself. Abhimanyu requests Neil to leave him alone and delete the picture. Neil explains to Abhimanyu that Manjiri is happy not because he is getting married but because she thinks that he (Abhimanyu) is happy with his marriage with Aarohi.

Neil further tells Abhimanyu that he doesn’t seem happy at all. He says to Abhimanyu that he will tell Manjiri about his sadness if he can’t tell her himself. Akshara and Abhimanyu run behind Kairav and Neil to stop them from revealing their true feelings to their families. Kairav and Neil run and don’t listen to Akshara and Abhimanyu. Kairav reaches his family and says that they want to talk about something important. Neil does the same at Birla house. Manish, Suhasini and Manjiri everyone gets interrupted due to some reason. Kairav and Neil fail to reveal the truth to Goenkas and Manjiri respectively.

Akshara takes Kairav aside and Abhimanyu does the same with Neil. Akshara asks Kairav what was he going to do? Kairav says he was going to tell family that she is making a sacrifice for Aarohi. Akshara tells Kairav that her happiness lies in Aarohi’s happiness. She requests Kairav to not tell anyone about it. Kairav tells Akshara that he can tolerate this much greatness. He tells Akshara that they are normal people and normal people don’t make these big sacrifices. Akshara requests Kairav to be happy and let everything go as it is as the whole family is happy in it. Kairav tells Akshara that everyone is happy because they are unaware of her pain.

Akshara tells Kairav that she has moved on and requests him to not pull her back. She continuously requests Kairav to not tell the truth to anyone. On the other side, Abhimanyu asks Neil what will he do? He tells Neil that he wants to fight too but can’t as Akshara has given up. Abhimanyu tells Neil that he will do anything to fix everything once Akshara says that she wants to marry him. He asks Neil what is the point of ruining Manjiri’s happiness if Akshara has stepped back. Abhimanyu requests Neil to let Manjiri be happy at least. Akshara hugs Kairav and Abhimanyu hugs Neil requesting them to let everything go as it is going on.

They cry profusely on their brothers shoulders. Abhimanyu again stops Neil from telling anything to Manjiri by lying. Manjiri feels suspicious. Neil tells Abhimanyu that he won’t give up on his happiness. Abhimanyu asks Neil to let it be as Akshara is silent. Neil thinks he won’t give like Abhimanyu and Akshara. Next morning, at hospital Aarohi feels happy getting engaged to Abhimanyu anyhow. She thinks she won’t let anything go wrong in her mehendi ceremony. Mahima comes and asks Aarohi to not dream big as she is not capable of Abhimanyu.

Angry Abhimanyu thinks he will become like Akshara wants him to be. Aarohi calls the admission coordinator. Coordinator tells Aarohi that she can get admission in management quota, not general seat. He shocks her by telling her that she has to pay 30 lakhs rupees to get a management seat. The coordinator further asks Aarohi to decide and pay fast otherwise this seat would get allocated to someone else. Aarohi thinks taking a management seat is against principles and no one will agree. She thinks to try. Aarihi gets scared hearing Abhimanyu scolding someone and saying that he doesn’t want fraud.

Aarohi thinks she can’t tell Abhimanyu about her management seat as he is a man of principles. She gets more scared thinking that Abhimanyu doesn’t like lies and cheating. Aarohi thinks she can’t her family too as they are also people with principles. She decides to arrange 30 lakhs rupees herself. Neil hears some of Aarohi’s words and thinks to tell Abhimanyu about it. A patient’s mother thanks Akshara for helping her kid heal. She leaves giving a box of kaju katli to Akshara. On the other side, Abhimanyu drinks a full glass of fenugreek seeds water and Akshara eats a lot of kaju katli in pain.

Abhimanyu decides to keep his pain and tears hidden from Akshara. Both of them cry a lot and yearn for each other. In the next episode, Abhimanyu will snatch Akshara’s right to call him Abhi. Neil will show Manjiri Abhimanyu’s engagement video in which he injured his finger himself. Maniri will get tensed thinking that Abhimanyu is not happy marrying Aarohi. She will think about talking to him.

Reviewed Rating for Yeh Rishta 6th January 2022 Written Update Estranged Abhi: 4/5 This rating is solely based on the opinion of the writer. You may post your own take on the show in the comment section below.