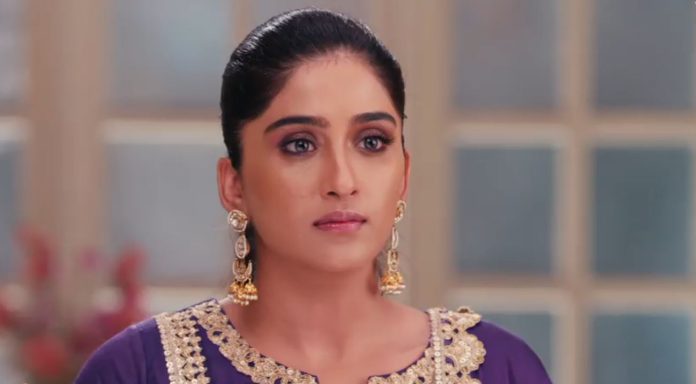 Choti Sarrdaarni 7th January 2022 Written Update Seher defends Rajveer Param welcomes Robbie in Gill Mansion. Seher greets Robbie. Robbie praises Seher and Param’s looks. He calls Seher an exact copy of Meher. Raj arrives and Robbie indirectly insults him. He further insults Raj by giving a note in the name of bakshish by wandering the same note around Seher. He praises Seher for keeping a charity case as Raj in her house. Seher befittingly replies to Robbie by saying that Raj is her husband not any liability. Harleen asks Robbie to leave the matter as they are doing it for Seher’s happiness. Karan, Param and Dhillons take a stand for Raj when Robbie calls him a burden.

Raj asks Robbie how he can prove himself capable of Seher. Kulwant insults Robbie by comparing him to a dog. Harleen controls an angry Robbie. Seher apologizes to Raj for Robbie’s ill words and behavior. With Cherry, Gullu and CCTV’s help Raj proves to Seher that he knows that she was secretly trying to help him in the room. He asks Seher to understand that she is stopping her life for him. He requests Seher to leave him alone as he doesn’t want to be a burden on her. Seher leaves from the room. She recalls Raj’ outburst and breakdown. Seher also recalls arising differences between her brothers. She further recalls Guruji’s refusal to help her. Seher seeks Meher’s help and hints of hope.

Kulwant too prays for Gill’s happiness. With Gullu and Cherry she prays that both Gill brothers get together sorting out their differences. Seher recalls Meher’s advice related to solving her problems. Seher thinks that Karan and Param’s marriage can make them responsible and sort out their differences. She thanks Meher for always helping her. Next morning, Seher shows Groom Sehra accessories to Param and Karan. She asks her brothers to think of their marriage. Both the brothers refuse to get married. They search Kulwant for help. Seher tells them that Kulwant also wants them to get married and has presently gone somewhere to pray for their family. Seher says only marriage can solve their problems.

Seher asks her brothers to agree for Meher and Sarab’s happiness. She asks them to think that happiness will arrive with her sister in-laws’ entry. Karan says they can go for a trip to feel happiness. Seher says she needs permanent happiness. Karan tells Seher that his and Param’s wives would not be able to understand their point of views. Seher acts to leave the house with Raj. She says that it is rightly said that married women can’t live in their parents house for long. Seher tells her brothers that being in a vulnerable condition too, Raj is trying to be happy and sort out Gill’s differences. She asks Param and Karan can’t they get married for Raj and her happiness?

Bittu and Ranna understand Seher’s plan. They help her in her plan. Seher goes sarcastic and says she is leaving abroad as her brothers don’t care for her. For Seher’s happiness, Karan and Param get convinced to get married. Jeeto asks for Bittu’s phone to inform Kulwant about this happiness. Bittu, Ranna, Param and Karan dance with each other in happiness. Seher feels happy seeing her family happy. She brings Raj and tells him that she is going to find her sisters in law. Raj congratulates Param and Karan. Karan tells Raj that he and Seher will always be their first priority. Param agrees with Karan’s words. Raj tells Karan and Param that he will do a nagin dance in their marriage.

Harleen and Robbie come. They ask everyone why they are so happy? In a low voice, Ranna and Bittu say that Nagin came with Earthworm just when Nagin’s name was taken. Seher tells Harleen and Robbie that Karan and Param agreed to get married. Harleen gets very happy. She twirls a huge bundle of notes around Param’s head and gives him blessings. Except Harleen and Robbie, everyone sees a glint of sadness in Karan’s eyes. Karan feels bad for always being treated as a stranger instead of Gill’s son. He signs to Seher that he is fine and controls his emotions. Ranna gives him strength by expressing his support towards him.

Seher thanks Raj for being happy in her family’s happiness. Rajveer tells Seher it’s his family too. Seher requests Raj to give her a promise that he will show the whole world that he can do anything even being blind. Raj asks Seher how he can give her a false promise and leaves. Seher promises Raj that she will anyhow convince Guruji to help her in healing him. She says once Guruji gets convinced to heal Raj, their and Gill’s life will be surrounded with happiness and celebrations.

In the next episode, Seher will reach Guruji’s ashram in a tractor. Guruji will get angry at Seher and will remind her that he warned her not to come to him ever. He will also tell Seher clearly that he won’t help Meher, her family or her relatives. Seher will grow adamant and will tell Guruji that she won’t leave till he agrees to help her. Guruji will ask Seher if she knows what Meher did to him? He will grab her hand and will take her somewhere to show her what Meher did to him.

Reviewed Rating for Choti Sarrdaarni 7th January 2022 Written Update Seher defends Rajveer: 4/5 This rating is solely based on the opinion of the writer. You may post your own take on the show in the comment section below.